Itâs survived multiple fires, the deaths of two owners, other natural disasters, and the loss of parking lot access from Grand Avenue. 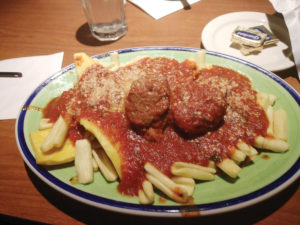 Half cavatelli, half ravioli and two meatballs at Noahâs Ark.

Doing interviews lately about the lost restaurant traditions of Iowa, I started wondering what has not been lost but would be deeply missed if it was. This is obviously a geographically specific question. People form their deepest restaurant attachments to places they met while young. They go there for homecoming, their proms, their reunions and when they return to town to visit friends and families.

This does not have as much to do with the quality of food as one might think. There was genuine grieving in Sioux City this year after Coney Island shut down after 99 years. Panic ensued when New York Cityâs Russian Tea Room was sold and closed in 2002. The outrage was such that the new owner decided to keep the restaurant exactly as it has been since it was opened in 1929 by members of the Imperial Ballet. They instead built a 30-story condo above and around the cafÃ©. Similar things happened in Ottumwa when the city thought about tearing down the loose meat sandwich joint Canteen Lunch in the Alley. Instead, a parking garage was built above and around it, too.

After several conversations with longtime locals, I reckoned that there are up to a dozen places in Des Moines that are beloved to their neighborhoods. For me, itâs Noahâs. I had my first pizza, first date and first legal drink there. Itâs the first stop from the airport for old friends. I have attended more board meetings at Noahâs than anywhere else, by far. Itâs survived multiple fires, the deaths of two owners, other natural disasters, and the loss of parking lot access from Grand Avenue. Both my father and mother enjoyed their last restaurant meals there, in the same booth. Dad suffered his fatal heart attack there.

Thatâs a lot of personal history, but I am hardly alone. One good friend says he truly hopes that he does not outlive Noahâs because he canât imagine it being out of his life. In the spirit of the holidays and their homecomings, I visited Noahâs several times last month to assure myself that it is doing just fine since the death of Jim Lacona.

Most things have not changed. The restaurant has three distinct dining spaces plus party rooms and lots of good parking. The furniture is still red, from carpets to booths. Delightful nautical stuff is everywhere. Beams cover space without function. Fresh flowers cover table tops. The music sounds like it did in the 1960s.

The fresh marinara from Teresa Laconaâs original recipe is still brilliant. The pizza and calzones are what Des Moines grew up loving. Cavatelli and ravioli still rock and can be split with two meatballs in one famous special. Steaks and chops come with Colbert sauce. That is a grand creation by the great chef Francois Vatel, to honor Louis XIVâs minister, made with meat glaze, butter, wine, shallots, tarragon and lemon juice. Love knots swim in garlic and butter. Full-sized yeast rolls are so good they are hard to resist even after some love knots. Onion rings are excellent, but green pepper rings are famous here. Beef and fettucine are so popular they rival tomato gravy pasta.

Desserts are air freighted in from San Francisco. Spumoni with rum sauce, chocolate blackout and coconut whiteout are all sold in bulk or individually.

What has probably changed the most is the cocktail menu. It now includes trendy things along with old classics. A cappuccino la scala resembled a revered grand opera and warmed a cold night. ♦