The biggest Thai place in town is also my favorite. 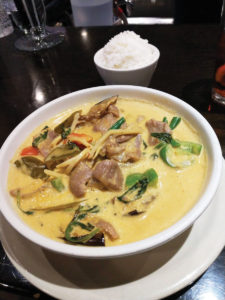 Green curry with eggplant and beef at Cool Basil

Forty years ago, Thai cuisine was a new thing in Des Moines. Prasong âPakâ Nurack and his wife, Beni, introduced us to their native food on weekends at the Italian cafeteria Little Joeâs on Court Avenue. Later they would move to a stand-alone place on East Walnut and another in Iowa City. Pak, who has gone on to a political career in Thailandâs Senate, was a big personality who could easily talk people into trying something new.

Thai food is not new any longer. The biggest Thai place in town is also my favorite. Cool Basil in Clive packs people regularly into a building that had been deemed âa cursed locationâ before they moved in. Granted, Liam Anivat and company got some breaks from the city that were not extended to four previous restaurants at the same address, all of which failed rather quickly. Access to the parking lot is exponentially better than before.

Cool Basil is the busiest local Thai place for several reasons, though. Besides having the best parking, it also has the most upscale ambiance and the strongest kitchen, at least Thai-wise. Thai food is legendary for its balance. The point of nearly every dish is to distribute a taste of at least four flavors â sweet, sour, spicy, salty, plus sometimes creamy and bitter. Cool Basil consistently does that.

Like most Thai restaurants, the menu is rather equally balanced with four types of dishes â rice, noodle, stir fried and curries, plus salads, appetizers and soups. Thai soups and salads are among the most famous in the world, and Cool Basil does an exemplary job delivering them.

Salads in Thailand, like Vietnam, are the least subtle anywhere. Sour flavors are popular, particularly in the legendary green papaya salad, made with bitter shredded papaya and vegetables in a spicy lime juice dressing. For those looking to acquire a new taste, Cool Basilâs version is one of the least dramatically sour and bitter. Other salads are not too different to Western taste buds.

Thailandâs most famous soups are tom yum kai and tom ka kai. Those are usually chicken stock soups with several Asian vegetables. Tom yum is made in clear broth, and tom ka thickens the soup with coconut milk. I am also fond of soup here that adds sweet corn and crab to tom ka type broth.

Curries are my favorite Thai dishes because the chili pastes are cut with the sweetness of coconut milk. South Asian, East African and British curries donât have such balance. Cool Basil offers five basic types of chili paste in curries â green, red, yellow, masaman and Penang. The latter two are filled with peanuts. All come with a choice of proteins and substitutions. (Duck, mock duck, scallops, calamari and catfish are no problem.) A generous portion of eggplant can be added to any dish on the menu for a dollar.

Similar choices are available with all stir fry, noodle and rice dishes. Cool Basil also offers large sushi and Chinese menus. Drinks are as exotic as one wants them. ♦