For three years now, Harbinger is the only restaurant in Iowa whose chef has been recognized by the James Beard Awards as top 20 in the Midwest. Itâs a 55-seater that has a distinct personality. It serves no pizza, no burgers, no French fries and no gargantuan plates. Most people in Des Moines expect those things when they go out. Otherwise, they assume the place is expensive. I donât think Harbinger is expensive, but itâs hard to convince someone who has never been there. 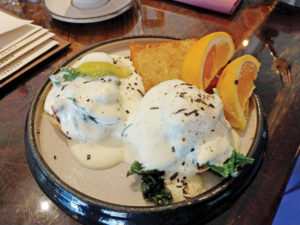 Owner/chef Joe Tripp is trying to combat this. In the last year, he has rolled out a happy hour and a brunch menu that are both affordable by any top 100 restaurant standards. While his regular dinner menu has items ranging from $8-$23, with all but two less than $15, the Happy Hour menu offers five items at $6 each. Throw in three of the restaurantâs famous steamed buns, and two people can share eight dishes for $38. Try finding that in Chicago or Minneapolis.

Two of us did that $38 deal recently. We started with a plate of pork rinds flavored with maple syrup and Sriracha and served with aerated buttermilk. These were fluffy and bold, a perfect dish to pair with a drink, and Happy Hour includes several $3 and $6 specials in beer, wine and cocktails. We moved on to a plate of fritters made with Pecorino and tapioca, served with a Vietnamese flavored tomato ragu and cucumbers.

Next we tried some crab and avocado toast made with Japanese milk bread and served with smoked eel sauce and spicy aioli. The bread has an absorbent quality that allows all the flavors to intermingle. Then we tried wild grape leaves stuffed with lemongrass beef and served with toasted peanuts and flowering cilantro, which is the Asian name for cilantro. Our favorite dish of the evening was tempura fried mushrooms, with locally grown shiitakes, served with a caramel of soy and shiso, which is known as beef steak plant outside Japan and is a delightful member of the mint family.

Steamed buns on our visit included one with pork belly, scallions and a homemade hoisin sauce. This seems to be a permanent member of the steamed bun menu. A relative newcomer to this menu featured tofu fried in orange chicken style with scallions and puffed noodles. The third bun included chicken karaage, which is Japanese for âtangy fry.â It was served with pickled carrots, fermented green garlic and a homemade Buffalo sauce.

Returning for brunch on a recent Sunday, we found both a noodles menu and a more traditional brunch menu. Three noodle bowls were made Thai style, Vietnamese style and Szechuan style, with appropriately different noodles and accompaniments. Having previously tried the dan dan, a Szechuan style soup with black vinegar, pork, wheat noodles, sesame, pickled mustard greens and bok choy, we tried the Vietnamese version, bun cha gio, with two pork sausages, an egg roll, cucumbers, pickled carrots and daikon, with lemon sauce poured over it all.

Off the brunch menu, we tried eggs Benedict with pork belly, braised kale and Hollandaise sauce made with yuzu which is a citrus fruit more like grapefruit than orange. Among the other offerings, priced $7-$15 with a Dungeness crab omelet on top, were sausage gravy and biscuits with morel mushrooms, a pancake souffle with banana miso caramel and buttermilk ice cream, and a truffled buckwheat tart with kale and popped groats. ♦