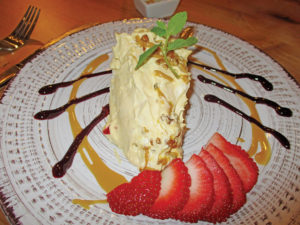 Nikkei is the hottest kind of fusion cuisine in the world that has not yet visited Des Moines. Three of the most famous chefs in the world hang their hats in this pantry where Japanese and Peruvians share a love of fresh fish and the ancient foods of the Incans. Then they confuse each other. Japanese cuisine is the subtlest on Earth. Itâs the only major culinary type that eschews garlic as too strong. Peruvian chefs love some of the least subtle chilies in the world. In Nikkei, they hold hands and kiss.

This was relatively unknown until the mercurial rise to international fame by Gaston Acurio, who launched in Lima and soon spread to most of South America and Europe. His La Mar in San Franciscoâs Embarcadero and Tanta in Chicago have been around for the better part of a decade, to acclaim. Nobu Matsuhisaâs Nobu restaurants are among Americaâs most famous Japanese cafÃ©s. Nobu came to New York and L.A. from Japan via Lima Nikkei restaurants. His food inspired the legendary Feran Adria, whose El Bulli in Barcelona turned the world onto molecular cooking and changed the culinary world. El Bulli is closed now, and Adria has opened Pakta, which serves two Nikkei menus â Maccu Piccu and Fujiyama.

Des Moines has a connection to all this. Miki Matsufuji is a Japanese Peruvian whose family owns several famous Nikkei cafÃ©s in Lima and South America. One of those has connections to Nobuâs days there. Miki has catered events in Des Moines for several years and consistently brings things that wow people. She is also friends with Mariela Maya and Fabiloa Carlin, the owners of Panka, central Iowaâs third and finest ever Peruvian restaurant.

The place is handsome, designed in large part by Gabe Lueders who also had a big hand in the CafÃ© di Scala (Aposto) design. A wooden bar and extremely comfortable wood furniture looks like a fine dining restaurant without any particular ethnic theme â just a mural of subtle photographs. Dinnerware is also lovely. An open kitchen shows off high-flame cooking.

Not yet licensed to serve alcohol, the place pushes chica morada, a native Peruvian drink that mixes boiled purple corn with lime, cinnamon, sugar and cloves. My table argued about whether it would mix better with vodka or tequila. The shared plates menu offers chicharones of pork belly, meatier than Mexican style, several combos of fried foods, one of steamed foods, and causas. The latter are cold dishes that top mashed potatoes with things like shrimp, avocado, crab and aji chilies, the Andean staple one type of which is called panka.

The most obviously Nikkei parts of the menu are the ceviche and sashimi menus. Our ceviches were the best I have had in Des Moines. Fresh tasting white fish, shrimp, crab, octopus, eels and salmon mixed with touches of corn, sweet potato, chilies and lots of lime juice. All included a classic Peruvian sauce â leche do tigre which spices its fish broth with chilies, lime juice and onions; chalaca which is cilantro, tomato and lime based; criolla which is the same minus tomatoes; and golf sauce which is mayo and ketchup with pisco. The sashimi were called tiradito and featured white fish or salmon.

Soups included a good chowder of shrimp and a seafood soup not too different from Mexican seven seas. Entrees mostly came paired with similar mixtures of cooked tomato, onion and cilantro with rice. Pork fried rice and two kinds of pasta also made the cut. My only disappointment at Panka was that fish was overcooked in chorrillana dish so much so that it could not be cut with a fork. Chicken dishes all used breast meat. Beef dishes, among the most popular, used tips.

The best thing I had was a meringue made with an avocado-like Peruvian super fruit called lucuma.