Some are a bit confusing 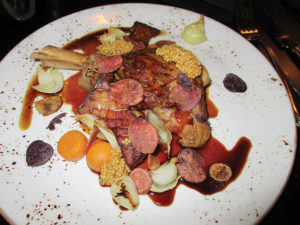 Braised shank of lamb at Table 128

Change is constant, in physics or the restaurant business. As with all paradoxes, there is no rule to find oneâs way to success in such chaos. Here are some examples of recent change locally. The space previously known as Bang, Bang Mongolian BBQ and Draught House 50 on Mills Civic Parkway now calls itself The Stubborn Goat. (So do three other local places.)

A lover of both goats and mutton, I checked it out and found a website for Grumpy Goatâs mother store in Illinois with a heavily Louisiana menu, something missing on the local sports bar scene. My subsequent visit to the Mills store confused me. It seems that the website I read was for grumpygoattavern.com while the Des Moines version is thegrumpygoattavern.com. The logos are the same, but the menus are quite different. In fact, the local store was still serving the menu from Draught House 50. Disappointed that there was no crawfish etouffee, blackened swordfish or Creole chicken with biscuits, we tried burgers, crab cakes and wings. Later we learned that the place was out of crab cakes, so we tried an order of tacos. Burgers were huge, two large patties plus lots of other stuff. Fries were crinkle cut standards. Wings were generous and smoked. Tacos were singular, not plural, though served in a tray with three slots. This is a strange change â why alter a name, logo and theme but keep the same menu?

Aposto at CafÃ© di Scala is another form of confusing change. La Scala was a superb cafÃ© which also served as an event center on early weeknights. Then it became an event center that served as a restaurant once a week or once a month. More recently itâs returned to something quite like its original form. Always the paragon of fresh pasta excellence, I tried both the signature cavatelli in red sauce with sausage and the tagliatelle with wild mushroom sauce. The latter was so good that dinner companions tried to emulate it at home. Walnut cake, with lemon marscapone and freshly whipped cream, plus a chocolate torte with poached cherries, peanut butter mousse, amaretto and Port reduction, were well done send offs.

Five years into Table 128âs saga, after briefer stints as a BBQ and as Tartine, changes are a key part of the restaurantâs ethos. The menu changes with the seasons, as it should, and as few do in the western suburbs. A few things never go off the menu â the house cut frites, truffle frites and the rosemary Parmesan frites; the houseâs signature spicy donuts; burgers from vegan, local farm and bison ranch sources; roasted beet salad; and kale salad.
A recent trip discovered tender lamb shank with a cornucopia of late winter delights â cippolinis, sweet potatoes, fingerlings, pickled mustard seeds and oyster mushrooms. Another delight on the current menu was duck that included roulade of breast with crisped leg, Swiss chard, creamed corn, French horn mushrooms and porcini broth. The latest dessert on the menu was one of Chef Pritchardâs best ever â huckleberry panna cotta. Table 128 also has Happy Hour that includes several generous discounts on appetizers (clams and mussels in tomato sauce with sausage for $6, yes), wine, beer and cocktails. Sweet corn and lump crab with cheese and chipotle, and black rice cakes with lotus root kim chee and confit of duck are becoming so popular they might stay on the menu longer than most changes here.

Chicago Pizza is up and serving in the former Bambinoâs on Grand Avenue… Pioneer Mingo farmer Larry Cleverley is planting walnut trees that he hopes will produce truffles in America, in as few as three years, without the assistance of overpriced rooting pigs. ♦