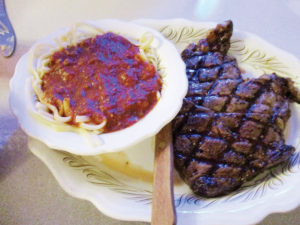 Ribeye with spaghetti at Hilltop.

The family-owned, traditional Italian Des Moines cafÃ© has anchored its neighborhood since 1950.

For west side patrons such as I, Hubbell Avenue seems to end at Tursiâs Latin King at its intersection with University Avenue. That concept might be changing. Big Alâs, just one block northeast of Tursiâs, brought a personalized brand of barbecue to town with new takes such as hot beef and pork sandwiches with hickory smoked gravies, creamed corn with jalapenos, deviled egg potato salad, and burnt end beans.

That reminded me that Hubbell really only begins at University. Its true center has always been a couple miles further northeast, at Bianchiâs Hilltop Restaurant. That family-owned, traditional Italian Des Moines cafÃ© has anchored its neighborhood since 1950. Of continuously operating places, only Noahâs and Mr. Vâs predate that. Noahâs has not been at the same address that long, and Mr. Vâs may or not even be open any more.

Hilltop reminds me mostly of a large cafÃ© in small town Iowa â Cronkâs in Denison for instance. A U-shaped bar area makes singles feel comfortable and not really alone. A wall mural of an Italian vineyard is one of the best in town. On my visits, the restaurantâs main crowd arrived later than at similar westside places like Noahâs, that are quite busy by 5:30 p.m. A friend explained that âeast siders work till 5.â

Hilltop is probably most famous for its pizza, which reminds me of Chuckâs with thin crusts and fresh mozzarella and basil on their Margherita pies. Daily specials are very popular. I have run into meat loaf here that esteemed caterer Cyd Koehn labels the best meat loaf she has ever tasted. Another recurring special is beef and noodles. I asked recently on Des Moines Dining Discoveries Facebook page where one can still find this old classic and only heard about three places, all on the eastside. A recent special included this traditional favorite with thick egg noodles, spicy gravy, mashed potatoes, salad and a bread basket for $10 or $12. Thatâs special.

‘So are the thin sliced onion rings. A âsideâ order is so large that two people can barely finish it. I have no idea what âsmall,â âmediumâ and âlargeâ orders might be. A waitress suggested that we keep the crumbs. Good idea, as they served as excellent surrogates for croutons on salads.

Hilltop is well known in esoteric circles as one of the rare places in Iowa that keeps frog legs on its menu. The ones I tried were huge, I suspect Vietnamese or Indonesian sourced legs, in a crispy batter. No one could confirm their source though. Mostly young wait staffers were unable to answer questions like âWhat is the price of that special?â
Walleye is also a menu standard one does see very often. Chicken livers were fried in butter. Fried chicken is a staple here, too, with an order of deep fried bird â including half a chicken in a super batter that enticed me to eat the crumbs. The meat was moist, too, resembling broasted chicken. Among the side dish choices are hash browns that are served in patty form, two patties per order. Also, spaghetti with marinara is a side dish option with a sweet and spicy sauce. Six-ounce burgers were served on what appeared to be half loaves of bread. They included fries for only $7.

Steaks are popular, too, with top prices under $20. A ribeye recently delivered excellent sear, but only on one side. Salads were quite generous and quite pedestrian with iceberg lettuce dominant and dressings ranging from quite sweet to moderately sweet. Homemade cheesecake is the sole dessert option, but I have always been so full of the generous portions of everything else that I canât comment about that.

Big Alâs has expanded to the southside with a new store in the Ramada Inn on Army Post Road… Seafood Trap, in the old Pattonâs on East Grand, offers $10 off its variety bag on Tuesdays. ♦