Watch a potted plant instead 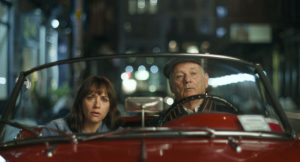 Well, that was unfortunate. This was what I thought after seeing the latest Sofia Coppola work.

Unfortunately this movie portrays little more than a few preening, vapid, self-important New Yorkers preoccupied with their own vacuousness. (That may not be a word, but you get the idea.) Movies are supposed to have a plot, character development, conflict â things that make the flickering colorful lights on a screen deceive you into thinking youâre doing something other than looking at flickering lights.

Murray plays Felix, a Billy-Murray-type jet-setter and owner of a Manhattan art gallery who thinks itâs his duty to seduce every beautiful woman who crosses his path. Felix is a livewire on the party circuit, though something of a disaster as a family man. He is in New York to visit his daughter, Laura (Rashida Jones), who never thought much of Felix in terms of father material but stayed in touch. Itâs his gift for womanizing that inspires Laura to reach out. You see, Laura, a successful but creatively blocked novelist living in Soho, thinks her husband, Dean (Marlon Wayans), who has a new start-up business (a website of some sort; the film is super vague) is cheating on her.

It starts one night when Dean, returning from a business trip, zonked out on Xanax, climbs into bed and begins to kiss her quite passionately. âHi,â she says, surprised. He jolts away, as though he thought she was someone else. Later, she finds a womanâs toiletry bag in his suitcase. He has a valid explanation â his co-worker Fiona couldnât carry liquids on the plane, so he stashed it in his luggage for her. She makes the mistake of confiding in her father, and heâs immediately convinced that Dean is cheating on her.

For Felix, the suggestion that Lauraâs marriage may indeed be on the rocks is a perverse form of wish-fulfilment, offering an excuse for him to step into the fray, imparting outdated lessons about life and love while grandstanding in his own gumshoe fantasy, a role heâs clearly enjoying too much.

Scenes of Felix charming traffic cops while Laura rolls her eyes are fun (âIt must be very nice to be youââ clearly, sheâs talking to Bill not Felix here), but more telling is her embarrassment when he comes on to the waitress or, worse, to one of her daughterâs ballet teachers. When Felix casually declares that heâs become deaf to the sound of womenâs voices (âItâs the pitchâ), Coppola cuts to the heart of the matter, forcing Laura to finally stand her ground and to remind him that âyou have daughters and granddaughters, so youâd better start figuring out how to hear them.â

The film doesnât have enough fun to be a great comedy, but it also doesnât delve deep enough into the characters to make for much hard-hitting, compelling drama. There was the potential to go dark at moments here, if the filmmakers didnât want the comedy to be zany, but the movie lacks bite and genuine emotion at the opportunities where it could inset some.

Beyond Murray, the remainder of the cast feel as though they have been assembled to act as a comic foil against his legendary.

At the end of this movie, I regretted the four hours of my life that I will never get back. The good news is that it was only 96 minutes long. The bad news is you wonât be able to spend the next 2.5 hours talking about how bad the movie was. ♦