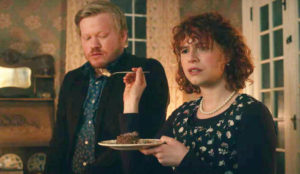 Charlie Kaufman is undeniably one of the greatest writers of his generation. âBeing John Malkovichâ and âEternal Sunshine of the Spotless Mindâ are some of his most notable works, but itâs âSynecdoche, New Yorkâ thatâs considered by many as one of the best films of the respective decade. However, if youâve heard of these youâll likely understand why Kaufman only pops up occasionally.

âMy films donât make money,â he confesses in an interview with The Guardian earlier this year. âIn 2008, the first movie that I directed, âSynecdoche, New York,â came out, and it lost money. And at that time the movie industry, coincidentally, fell apart because of the economic crisis and studios stopped making movies and started making superhero franchise things. The sort of mid-budget movie that Iâve been working on, there was no outlet for it any more. It just didnât exist.â

So you can imagine the excitement of seeing a new movie of his pop-up rather unexpectedly in my Netflix queue.

An exploration of regret, longing and the fragility of the human spirit, âIâm Thinking of Ending Thingsâ is a lot to take in. Itâs the kind of movie that freezes you in place even as the credits roll and forces you to detach from what you saw before returning to the waking world.

Despite having second thoughts about their relationship, a young woman (Jessie Buckley) takes a road trip with her new boyfriend, Jake (Jesse Plemons), to his family farm. Snowed in at the farm with Jakeâs mother (Toni Collette) and father (David Thewlis), the young woman begins to question the nature of everything she knew or understood about her boyfriend, herself and the world.

Interspersed throughout their stay at the farm, an ongoing saga featuring a middle school janitor plays out. We see him prepare for work, go through the dayâs tasks and take in the scenes at school that play out before him. Weâre never told who this person is or how he impacts the main story. Like us (the audience), he takes the world in in silence.

Making an impactful move in life requires determination, courage and decisiveness. Moving to another country, switching jobs, ending a relationship â all can be extremely demanding and psychologically painful. âIâm Thinking of Ending Thingsâ demonstrates how a person can delay these actions, sometimes indefinitely. From the excruciatingly long car drives (almost an hour of the runtime is spent inside the car listening to the main characters debating apparently random philosophical themes) to the enigmatic transitions of time passing by, Kaufmanâs screenplay keeps transmitting a message of how, even when people are stationary, time keeps flowing forward.

While âIâm Thinking of Ending Thingsâ is a Netflix original movie, it screams A24. From the incredibly perplexing narrative told through bizarre storytelling to its distinctly unconventional technical characteristics, Charlie Kaufman offers a remarkably complex film that can take different interpretations (and may require more than one viewing). His insistence in transmitting one of the filmâs messages through never-ending philosophical conversations and confusing time-bending distractions stretch the story to intentionally confusing levels. (Thereâs a limit to how abstract and implicit a movie can be without becoming genuinely hard to understand, and Kaufman walks that threshold. Successful sometimes, not that much in other moments.)

Nevertheless, the messages are successfully delivered through an intriguing, head-scratching, weirdly captivating story packed with cultural debates and unique characters. An absolutely outstanding Jessie Buckley elevates every single line of dialogue, showing tremendous emotional range, with the rest of the impressively talented cast adding to the multi-layered screenplay. Itâs not your usual Netflix flick to stream while doing tedious home tasks. This film is an investment, so be prepared to lose track of time. ♦