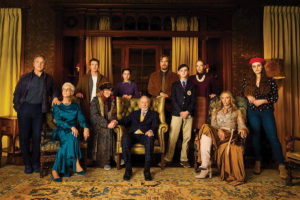 Director Rian Johnson shows his love for the murder mystery genre but avoids falling into its predictable plot mechanics in his latest feature, âKnives Out.â

When renowned crime novelist Harlan Thrombey (Christopher Plummer) is found dead at his estate just after his 85th birthday, his death brings in the whole Thrombey clan seeking the opportunity to selfishly claim his inheritance. But the strange circumstances of his passing catch the attention of the inquisitive and debonair Detective Benoit Blanc (Daniel Craig), who is mysteriously enlisted to investigate. From Harlanâs dysfunctional family to his devoted staff, Blanc sifts through a web of red herrings and self-serving lies to uncover the truth behind Harlanâs untimely death.

As a whodunit, âKnives Outâ is effective in ways you might not see coming and in plenty of ways you will. Even though the events leading to Harlanâs death are revealed in the first act, Johnson manages to subvert expectations and remain steps ahead of audiences until the very end.

One of the best aspects of this movie is the cast. Everyone nailed their characters and played off one another exceptionally well.

Leading the pack is Daniel Craig as Benoit Blanc, inflecting the same accent you might imagine he would if he became the new spokesman for fried chicken. Yes, his southern drawl is comically exaggerated â as itâs intended to be. He spouts bizarre and confusing analogies that come with an implied wink at the camera, letting us know that everyone is in on the joke. He strikes a good balance of intelligence and laughter as a man who is perceptive of peopleâs intentions. The character often looks to be underwhelming as a detective, but thatâs also intentional. He eventually reveals himself (like the director) to be a few steps ahead this entire time.

Chris Evans relishes in playing the ruthless and yet complex grandson, Ransom, and doesnât hold back on spitting insults to anyone including his own family members. Michael Shannon plays a role slightly less antagonistic and more pathetic as youngest son, Walt, who gets no respect from his family. Jamie Lee Curtis is a force of charisma as the eldest daughter, Linda, playing the victim who swans about the huge estate. The incomparable Toni Colette, as his widowed daughter-in-law and self-help guru, and Don Johnson, as the blustering son-in-law, add further value to each scene theyâre in. Even smaller but no less significant roles like Noah Segan and Lakieth Stanfield are also worth noting.

But the standout is Ana de Armas. She plays a crucial role in this story, serving as Harlanâs nurse Marta, who feels isolated within the Thrombley family despite their claim to have her best interest. As the plot progresses, De Armas shows range including unexpected comedic moments. She serves more of a pivotal role in the mystery as she becomes Watson to Blancâs Holmes to unravel the old gentlemanâs death.
While Craig might deliver the guffaw moments, thereâs plenty of dry humor throughout. Try to count the number of different South American nationalities ascribed to Marta by this phony bunch as they keep insisting she is âone of the family.â

âKnives Outâ offers 130 minutes of old-fashioned but well-executed murder-mystery entertainment and convinces thanks to a solid plot, great locations and a gifted cast. Johnsonâs direction is fantastic throughout as he incorporates a range of style to each shot. And itâs not just style over substance either. His script is witty, hilarious and keeps you invested through the movieâs entirety. His take of this genre is vastly different from whodunits in the past, which made the experience better. ♦