‘Bad Times at the El Royale’ 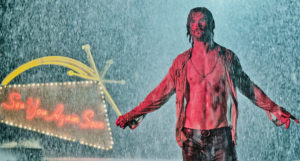 A man wearing a long trench coat and matching fedora enters a hotel room cautiously. Once inside, he immediately locks the door â deadbolt and chain â closes the curtains and places a handgun from his coat pocket on the radio stand. After a short while, he begins to move furniture around the room, from one end to the other, so as to easily pull up the carpet, repeating the process to gain full access to the complete wooden floor. Once he does, the attachÃ© case he carries is placed below the floorboards before he places everything back into proper order. He then sits around, seemingly waiting on someone or something when a knock comes at the door. With gun at hand, he creeps over to check. Whomever it could be, he clearly recognizes as he now relaxes and opens the door with a signal to them to come in. They instead shoot him in the back and kill him.

Itâs a slow burn of a scene with a rather abrupt end that sets the tone for the rest of the film. From there, we fast-forward 10 years and we meet the main cast of this mystery: a priest, a singer, a salesman, the concierge, and a woman with a habit of looking over her shoulder. They arrive one by one at the El Royale, a Lake Tahoe hotel with a dark past, each with a secret to bury. As the day goes on, we learn more about these people in glimpsing flashbacks to tell us enough that some of these people are not as they present and cement for us that they are exactly what they present.

While the structure of the film feels fresh and simulating, with non-linear storytelling and scenes from multiple perspectives, the pacing tends to drag at certain parts. But thatâs where the characters propel the story. Jon Hamm brings his fast talking âMad Menâ charm. Jeff Bridges gives another go at the grizzled old man role heâs perfected throughout his career. Lewis Pullman plays the Hotel everything â bell boy, bartender, tour guide, custodianâ¦ you get the idea â as he delivers a purposefully frustrating but strong character. Chris Hemsworth gives us something we havenât seen from him before, but the less said about that, the better. Rounding out the cast are Dakota Johnson and Cailee Spaeny.

This is more of a character study than a typical feature movie. The flashbacks provide deeper meaning to character motivations and what brought them to the El Royale on this particular occasion. They also provide perspective, as many scenes are shot multiple times at multiple angles so audiences are seeing things as each character sees them. In the background, thereâs a mystery to the hotel itself and those who run it, the FBI is after some form of evidence on what this hotel is about, a film is kept by the concierge including some famous dead person doing something he shouldnât have done, and some other famous person has been killed within the past few days.

This is where the film suffers most. Thereâs simply too much going on. At times there is humor, but a harsh exhale-through-your-nose kind of humor rather than a laugh-out-loud moment. For what should otherwise be an intense thriller, the filmâs slow pacing tends to drag.

Ultimately, this was a film with more style than substance. The story is something wholly unique while being strangely familiar, but itâs bogged down by too much backstory. Some people might be satisfied to find out about a particular character while others will leave the theater asking someone to explain the hotel again. A question or two is fine to keep the conversation alive, but this film raises far more than it answers.

If youâve seen âCabin in the Woods,â then you have a good idea of what director Drew Goddard offers. He brings that same sense of style and flare to âBad Times at the El Royale.â Itâs an ode to Tarantino. The film looks great and hooks you in from the start. It takes its time introducing and fleshing out the characters while unfolding the plot in a way that keeps you guessing. A little long toward the end, but the payoff is worth it. ♦