‘The House with a Clock in its Walls’

Fear-inducing madness is sure to scare â and no doubt confuse â younger audiences. 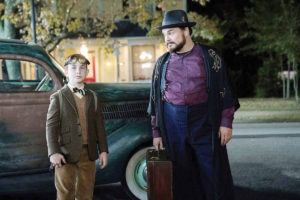 The first childrenâs movie by director Eli Roth, known for grotesque, grindhouse films like âCabin Fever,â âDeath Wishâ and âHostel,â âThe House with a Clock in its Wallsâ adapts the 1973 John Bellairs novel into a mishmash of a coming-of-age story mixed with dark horror.

Set in a Michigan of the 1950s, the story follows Lewis Barnavelt (Owen Vaccaro), a shy, bookish, recently orphaned 10-year-old, who moves to the fictional town of New Zebedee to live with his uncle Jonathan (Jack Black). Lewis is the quintessential oddball movie kid: He never leaves the house without his goggles (like his favorite adventure hero, Captain Midnight), he enjoys reading dictionaries â a well-thumbed dictionary is the kidâs constant companion â and heâs often clad in suspenders and bowtie. But, hey, when your uncle is a bit on the strange side himself â his house, too, is a little odd, and decorated with hundreds of clocks â whereâs the harm?

Jonathan, as it happens, is a warlock, and his best friend, Mrs. Zimmerman (Cate Blanchett), is a powerful magician in her own right. The two are neighbors and have a relationship style similar to frenemies. Such fond endearments as âchoke and dieâ are their conversational currency. Itâs the definition of a âplatonicâ relationship, literally, Lewis informs them.

Each night, Jonathan roams about the house looking for a ticking clock. Meanwhile, at school, Lewis makes friends with another boy, Tarby (Sunny Suljic), another clichÃ© movie child who at first seems like a good friend until heâs gotten everything he wants out of Lewis. At night, Lewis has dreams about his mother (Lorenza Izzo), who seems to care less about calming her sonâs fear of being alone and more concerned about finding some book and key.

Everything in the film keeps light when it comes to the scenes of horror. But, on more than one occasion, Roth canât help himself and interjects a few bits of fear-inducing madness sure to scare â and no doubt confuse â younger audiences. A deal with the demon, Azazel, invokes hell, blood magic and Christian doctrine; killer dolls reminiscent of âBlade Runner,â though made a little less creepy due to how much Jonathan mentions their creepiness; snarling pumpkin heads; and Kyle MacLachlan as a red-eyed, reanimated corpse.

Youngster Owen Vaccaro wrings out copious tears on cue and clearly wants us to remember the Harry Potter-esque orphan story from the nostalgia-drenched opening frames. Black is at his best when heâs allowed to go full ham, and he infuses every moment of goofy sorcery exposition with his trademark zeal.

But the secret MVP of the movie is Blanchett, playing the magical witch neighbor. Sheâs so overqualified for the role that it amounts to nothing more than throwing softball quips at Black and firing lasers at anthropomorphic pumpkins. By the end of the movie, you canât help but say, âBut why is she in this?â

The film is ostensibly a Harry Potter-like coming-of-age yarn. Roth does a clunky job of trying to marry a kid-safe story and jokes, like a recurring poop gag, with his signature dark style that overtakes the filmâs final act. There are some fun gross-out moments that add to the tension and also some awkward plot elements involving World War II that even allude to the Holocaust that are never fully committed to or explained, leaving audiences to once again mumble, âBuy why?â ♦