âTagâ is a fine callback to the sprawling ensemble comedies of the 1980s. 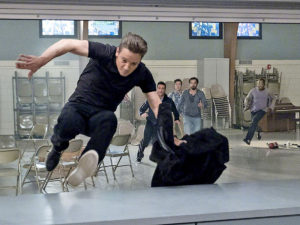 While on the surface this might sound like a modern retelling of The Twilight Zoneâs classic episode âKick the Can,â in which we see a group of seniors at a retirement home learn the secret of youth, âTagâ steers toward the relationships those games build rather than the games themselves.

For the past 30 years, a group of friends has been playing the same game of tag. (âYouâre it! No tag-backs!â Tag.) Even as they spread across the country with their own careers and families, they dedicate one month of the year to their game. Every May the game resumes, and the taggers go to great lengths to avoid being it.

The players are Hogan âHoagieâ (Ed Helms), a straight-laced fellow with a much more competitive wife named Anna (Isla Fisher); the successful businessman who secretly suffers from a case of imposter syndrome, Bob (Jon Hamm); the constantly stoned but somehow always loveable, Chilli (Jake Johnson); the sardonic pushover, Sable (Hannibal Buress); and the invincible Jerry (Jeremy Renner), whoâs so fast and strong that heâs never, ever been tagged.
Of course, Jerry hasnât remained untagged all these years without reason. When approached, he unveils his heightened senses and powers of observation via internal monologues (think Sherlock Holmes) that the film captures surprisingly well. Moreover, when cornered, he often goes far beyond even the most absurd response: diving through windows, jumping off roofs, throwing a classroom projector at a friend.

The film revolves around the groupâs frenzied attempts to finally tag Jerry during the weekend heâs supposed to get married, thinking heâll be more vulnerable than ever.

This movie is chock-full of action, much of it intentionally over the top. The taggers are intense, even diabolical at times. But itâs in these over-the-top scenes that the film seems to prove its self-awareness. It never passes up an opportunity to poke fun at itself. Each chase scene makes the taggers appear both heroic and appropriately ridiculous.

âTagâ benefits from a very funny cast, with standouts being Hannibal Buress and Jake Johnson. Buress delivers line after line of comedic gold that ranges from the absurd to bitingly poignant. All five of these stars feel like friends who have known each other for a while. They make a lot of banter and taunting, the kind that a lot of guys would have but with a lot of underlying heart. They get so intense with their team of tag that abandoning it would be like a death in the family.

The chemistry between the leading men is strong, and the female roles are also enjoyable to watch. Itâs certainly entertaining to see such a talented cast just have fun with each other.

Sure, there are flaws throughout the movie, and even the 1 hour and 40 minute runtime feels a little long. As much fun as âTagâ has with its action/comedy, it doesnât dig equally deep into its themes about friendship and how time both does and does not change people. The film similarly raises heavier issues (like how Jerry didnât tell his lifelong friends that heâs a recovering alcoholic) that beg for further exploration, yet ultimately skims over them and leaves those plot threads dangling.

But thereâs something about this group that makes you want to stick around. Surprisingly, thereâs emotional resonance in this slapstick flick about friends who are terrified to hug. Add that to the solid chemistry between the leads, and âTagâ is a fine callback to the sprawling ensemble comedies of the 1980s, back when the real-life tag team graduated high school. Great friendships are worth holding on to, and you should cherish your friends. Whatever your thing is, no matter how silly your time together is â enjoy it. ♦