Grass may be clipped from this stoner flick, but itâs far from a drug-free zone. 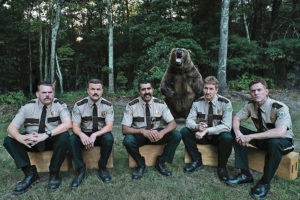 In 2002, Broken Lizard exploded onto the scene with their stoner-comedy âSuper Troopers.â While the film holds an approval rating of 35 percent based on 88 reviews, with an average rating of 5/10, it quickly became a cult favorite among its fans.

Fast forward to March 24, 2015 â Broken Lizard launched an IndieGogo campaign to raise $2 million to produce the film. About 24 hours later, they had already surpassed their goal, and the movie was greenlit. And three long years later, fans are treated to the release of âSuper Troopers 2.â

The movie picks up a few years down the line as the former state troopers have now become former officers after an accident, which took place in between movies involving a well-known beloved child actor. Bucking the traditional recap, the movie begins with exposition that is relayed so quick and clunky that itâs very obviously used to a comedic degree. This tongue-in-cheek style to their writing is present throughout, rewarding those who saw the first and beckoning others to re-watch the original.

There was a wonderful sense of chaos to the original âSuper Troopers,â which seemed willing (and able) to do just about anything to make the audience laugh, and frequently teetered on the brink of collapsing under its own silliness. ST2 doesnât quite capture that same recklessness, but it still has its m(eow)ments.

Off the force and working construction, this team of Vermont state troopers is looking for a shot at redemption with the newly assigned task of overseeing an adjustment of United States borders into parts that had heretofore been Canadian. While the plot is easily the flimsiest aspect about this film, it holds strong enough to allow for the flow of America-Canada insults between the troopers and the Mounted Police theyâll soon be replacing. Some of the best lines of the film come when these two groups get the insults going.

While fans of the first film are certainly rewarded with comedic references, ST2 makes enough strides to separate itself from being too derivative. The sad thing is the referential humor falls somewhat flat (almost like the actors catching themselves reusing old jokes) in comparison to the original jokes and hijinks. The callbacks feel tired and are there only to placate the fans.

The majority of referential humor plays off the established characters and their interactions (or lack thereof) with each other. (A scene between Farva and Foster plays this out in a delightfully silly way.) Some of the stereotypical jokes about the difference between Canadian and American culture feel a bit outdated and unnecessary, though Canada takes America to town with some of their more pointed jabs. Metric conversion jokes, references to American obesity, and overly affected pronunciation of the word âsorryâ are recurring themes in ST2, and itâs a credit to the filmâs talented cast and creative team that these jokes generally continue to be funny despite their frequency.

Perhaps the strangest thing of note with this film is the lack of genuine stoner comedy that resonated so well with the high-school and college crowd. The studio and the filmâs creative team made a big stink about the film hitting theaters on April 20 (a date widely regarded as an annual âhighâ holiday for recreational drug aficionados), but the film is conspicuously light on the sort of trippy weed humor that filled the original film.

While the grass may be clipped from this flick, itâs far from a drug-free zone. Shrooms and smokes are substituted for pills of all shapes and colors. This is Canada after all, where the prescriptions flow like the falls in Niagara.
This is a film for the fans â and considering it was crowdsourced, did you really expect anything else? ♦