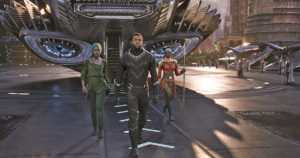 Due to the recent oversaturation of the superhero genre, many have developed a fatigue to these movies by now and are tired of seeing the same old thing rehashed over and over again. Worry not, viewer â âBlack Pantherâ stands alone among Marvelâs already impressive feature films as one that not only manages to simultaneously be a comic-book blockbuster but also a pulsating spy thriller and family saga.

The film opens in Oakland 1992 â the birthplace of the Black Panther movement â establishing the fact Wakanda has spies across the world, identified only by a hidden tattoo on the inner lower lip that glows blue. The scene is important not only for establishing the main conflict of the film but also to present to the audience the sheer difference in lifestyles between the two cultures. In Oakland, you can see poverty (basketball hoops with literal baskets), frustration with those in power (Public Enemy posters), and radicalization (arms race for the coming conflict). The next scene cuts to Wakanda, a breathtaking fantasia that could give Asgard a run for its money.
Following the death of his father in Civil War, we join TâChalla (Chadwick Boseman) as he prepares for his coronation to be king of Wakanda, an incredibly rich, unimaginably advanced country built on the nigh-magical substance vibranium. Along the way home, he reunites with love interest Nakia (Lupita Nyongâo), at the time undercover as a Wakandan agent rescuing a group of kidnapped girls from Boko Haram-like soldiers. A comedic tone is established in an otherwise tense situation â a reflection of the movie to come.

Not certain of how he will rule, TâChalla surrounds himself with those he respects. The relationship between TâChalla and his little sister, Shuri (Letitia Wright), best demonstrates the movieâs comic groove. She is a strong-willed, tech-savvy and charismatic young woman leading scientific advancement in Wakanda, while at the same time making sure her brother keeps a level head.

Learning from past superhero films and foregoing the third act blue space beam or CGI baddie, âBlack Pantherâ gets the villains they deserve in arms dealer Ulysses Klaue (Andy Serkis) and Black Ops mercenary Erik âKillmongerâ Stevens (Michael B. Jordan). Each command their scenes and add a sense of danger that seems to have been missing from recent Marvel films. Jordan is so good as Killmonger that he effortlessly steals every scene he appears in and highlights how fundamentally boring TâChalla actually is.

The rest of the cast is rounded out with fantastic performances. Danai Gurira plays Okoye, the tough head of the all-female royal guard that can slay with a side statement as easily as a spear, while Daniel Kaluuya as a conflicted tribal elder, Angela Bassettâs Queen Mother Ramonda, and Forest Whitaker as shaman figure Zuri all lend their impressive skills to the set.

There is a history associated with the role of âBlack Panther,â unlike every other superhero Marvel has touted. Itâs a tradition to defend and protect his people, not a decision he made after donning the suit. Itâs a film that fundamentally questions the nature of power, freedom and responsibility.

Unlike the previous Marvel films, âBlack Pantherâ is not a muscular action extravaganza or a mind-bending cosmic adventure. Co-written and directed by Ryan Coogler, âBlack Pantherâ is a radically different kind of comic book movie, one with a proud Afrocentric twist, featuring a nearly all-black cast, that largely ignores the United States and focuses instead on the fictional nation of Wakanda â and it all works.

Do yourself a favor, grab a ticket and get in on the conversation. ♦