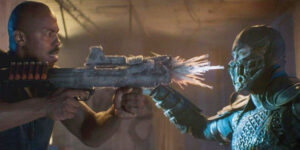 MMA fighter Cole Young (Lewis Tan), accustomed to taking a beating for money, is unaware of his heritage or why Outworldâs Emperor Shang Tsung (Chin Han) has sent his best warrior,
Sub-Zero (Joe Taslim), an otherworldly Cryomancer, to hunt Cole down. Fearing for his familyâs safety, Cole goes in search of Sonya Blade (Jessica McNamee) at the direction of Jax (Mehcad Brooks), a Special Forces Major who bears the same strange dragon marking Cole was born with. Soon, he finds himself at the temple of Lord Raiden (Tadanobu Asano), an Elder God and the protector of Earthrealm, who grants sanctuary to those who bear the mark. Here, Cole trains with experienced warriors Liu Kang (Ludi Lin), Kung Lao (Max Huang) and rogue mercenary Kano (Josh Lawson), as he prepares to stand with Earthâs greatest champions against the enemies of Outworld in a high stakes battle for the universe. But will Cole be pushed hard enough to unlock his arcana â the immense power from within his soul â in time to save not only his family but to stop Outworld once and for all? 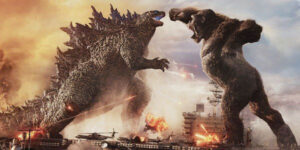 Legends collide in âGodzilla vs. Kongâ as these mythic adversaries meet in a spectacular battle for the ages with the fate of the world hanging in the balance. Kong and his protectors undertake a perilous journey to find his true home, and with them is Jia, a young orphaned girl with whom he has formed a unique and powerful bond. But they unexpectedly find themselves in the path of an enraged Godzilla, cutting a swath of destruction across the globe. The epic clash between the two titans â instigated by unseen forces â is only the beginning of the mystery that lies deep within Earthâs core. 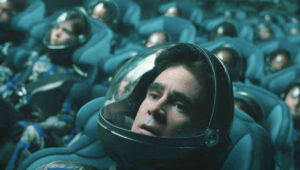 Set in the near future, the film chronicles the odyssey of 30 young men and women who are sent deep into space on a multi-generational mission in search of a new home. The mission descends into madness, as the crew reverts to its most primal state, not knowing if the real threat they face is whatâs outside the ship or who theyâre becoming inside it. ♦