Adapted from the Mark Millar and Dave Gibbons comic book series âThe Secret Service,â âThe Kingâs Manâ digs deeper into the genesis myth of the espionage collective known as Kingsman. Set in the early 1900s, this film follows a collection of the worst tyrants and criminal masterminds in history, all of whom gather to plot a war to wipe out millions of people, as one man races against time to put a stop to them. This time around, Ralph Fiennes and Harris Dickinson step into the shoes previously occupied by Colin Firth and Taron Egerton, taking over as the elder Kingsman and his latest recruit. 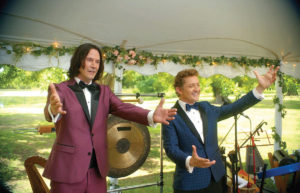 The stakes are higher than ever for the time-traveling exploits of William âBillâ S. Preston Esq. (Alex Winter) and Theodore âTedâ Logan (Keanu Reeves). The now middle-aged best friends set out on a new adventure to seek the song that will set their world right and bring harmony in the universe, with the help of their daughters (Samara Weaving and Brigette Lundy-Paine), a new batch of historical figures and a few music legends. The film also stars Kristen Schaal, Erinn Hayes, Jayma Mays, Holland Taylor, Kid Cudi, Anthony Carrigan, Jillian Bell, Beck Bennett, William Sadler, Hal Landon Jr. and Amy Stoch. Chris Matheson and Ed Solomon, who wrote the previous two âBill & Tedâ movies, returned to write the script for this new sequel. 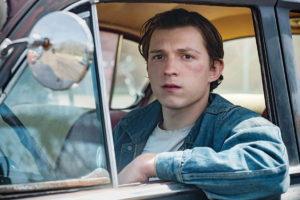 Set in rural southern Ohio and West Virginia, âThe Devil All the Timeâ follows a cast of compelling and bizarre characters from the end of World War II to the 1960s. Thereâs Willard Russell (Bill SkarsgÃ¥rd), tormented veteran of the carnage in the South Pacific who canât save his beautiful wife, Charlotte (Haley Bennett), from an agonizing death by cancer no matter how much sacrificial blood he pours on his âprayer log.â Thereâs Carl (Jason Clarke) and Sandy (Riley Keough) Henderson, a husband-and-wife team of serial killers who troll Americaâs highways searching for suitable models to photograph and exterminate. Thereâs the spider-handling preacher Roy (Harry Melling) and his crippled virtuoso-guitar-playing sidekick, Theodore, running from the law. And caught in the middle of all this is Arvin Eugene Russell (Tom Holland), Willard and Charlotteâs orphaned son, who grows up to be a good but also violent man in his own right. ♦