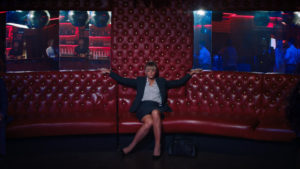 Suspiciously unambitious Cassie (Carey Mulligan) leads a quiet existence as a barista on the brink of 30 who lives in her parentsâ (Jennifer Coolidge, Clancy Brown) house since dropping out of medical school. She and her friendly boss, Gail (Laverne Cox), gab away days at the cafe. She has no professional ambitions, no boyfriend, no other standard interests. The way she spends her evenings, however, reveals a boiling vendetta. Men who cross her path are in serious danger, as beautiful and brutal Cassie seeks to heal from past trauma by doling out scathing lessons. Once a week or so, she dresses to the nines, goes out to a club, and is found passing-out-drunk there by some man who pretends to be âhelpingâ her but only wants to take advantage of a woman clearly not in full, consensual control. When he inevitably gets very frisky, she suddenly turns out to be the stone-sober deliverer of a message that will make him think hard before ever attempting such predatory hijinks again. When Ryan (Bo Burnham), a former classmate, re-enters her life, so does the possibility of healing â until new details about the death of her best friend infuriate Cassie and inspire her most potent confrontation yet. 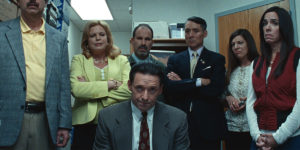 Hugh Jackman plays Dr. Frank Tassone, the superintendent of the Roslyn School District in Long Island â one of the most prestigious districts in suburban New York at the time. After inheriting an administrative mess, Tassone was caught stealing millions from the district and spending the money on holiday trips, gambling, a swanky apartment and a vacation home. The total amount embezzled (with the help of some other faculty members) was somewhere around $11 million â the largest single public school embezzlement scandal in history. The film’s writer and co-producer Mike Makowsky has a personal connection to the massive embezzlement scandal at the center of the story: he graduated from Roslyn High School, where the crime went down in the early 2000s. With a cast led by Jackman, plus TV mainstays Allison Janney (both an Emmy and Oscar winner) and Ray Romano (also an Emmy winner), itâs an enviable ensemble.

Poppy and Branch discover that they are but one of six different Troll tribes scattered over six different lands devoted to six different kinds of music: funk, country, techno, classical, pop and rock. Their world is about to get a lot bigger and a whole lot louder. A member of hard-rock royalty, Queen Barb (Rachel Bloom), aided by her father King Thrash (Ozzy Osbourne), wants to destroy all other kinds of music to let rock reign supreme. With the fate of the world at stake, Poppy and Branch, along with their friends â Biggie (James Corden), Chenille (Caroline Hjelt), Satin (Aino Jawo), Cooper (Ron Funches) and Guy Diamond (Kunal Nayyar) â set out to visit all the other lands to unify the Trolls in harmony against Barb, whoâs looking to upstage them all. Cast as members of the different musical tribes is one the largest, and most acclaimed, groups of musical talent ever assembled for an animated film. From the land of funk are Mary J. Blige, George Clinton and Anderson Paak. Representing country is Kelly Clarkson as Delta Dawn, with Sam Rockwell as Hickory and Flula Borg as Dickory. J Balvin brings reggaeton, while Ester Dean adds to the pop tribe. Anthony Ramos brings the beat in techno, and Jamie Dornan covers smooth jazz. World-renowned conductor and violinist Gustavo Dudamel appears as Trollzart, and Charlyne Yi as Pennywhistle from the land of Classical. And Kenan Thompson raps as a hip-hop newborn Troll named Tiny Diamond. ♦