Itâs April 1917 at the height of the First World War in the flatlands of France, and two young British soldiers â Schofield (George MacKay) and Blake (Dean-Charles Chapman) â are roused from a rare and uneasy rest in a flower-dotted meadow. They awake to an urgent mandate: an attack planned by another battalion, camped somewhere across enemy-occupied territory, is set to fall into a German trap. In a race against time, they must hand-deliver a message from General Erinmore (Colin Firth) to Col. Mackenzie (Benedict Cumberbatch) that will stop a deadly attack on 1,600 British soldiers â Blakeâs own brother among them. The journey entails a high-risk overnight trek across dreadful, pock-marked terrain with booby traps and other dangers lurking along the way. The pair must give their all to accomplish their mission and survive the war to end all wars. 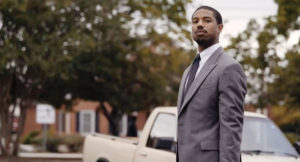 âJust Mercyâ follows young lawyer Bryan Stevenson and his history-making battle for justice. Itâs the late 1980s. After graduating from Harvard, Stevenson, a young black lawyer in crisp gray suits and neckties, had his pick of lucrative jobs. Instead, he heads to Monroe County, Alabama, to defend those wrongly condemned on death row. But Stevenson has other cases on his plate, too, like that of Herb Richardson (Rob Morgan), who did commit the crime he was convicted of. He set off a bomb on a womanâs porch and killed her. One of his first and most incendiary cases is that of Walter McMillian (Jamie Foxx), known as Johnny D., who, in 1987, was railroaded, in a flagrant way, for the murder of a teenage white girl.

The beauty business is about to get ugly. âLike a Bossâ follows two besties, Mia and Mel (Tiffany Haddish and Rose Byrne), as they live their best lives running their own cosmetics company theyâve built from the ground up. While they enjoy some success, they quickly realize that theyâre in way over their heads financially â a debt to the tune of about half a million dollars. Enter beauty icon Claire Luna (Salma Hayek in a stunning red wig and killer heels), who swoops in to save the day. She offers them a buyout that proves too tempting to pass up. It seems like the right answer, until they learn sheâs definitely not there to play nice, putting Mel and Miaâs lifelong friendship in jeopardy. âLike a Bossâ also features a star-studded cast including Billy Porter, Jennifer Coolidge, Ari Graynor, Natasha Rothwell, Jessica St. Clair and Karan Soni. ♦