The food year in review 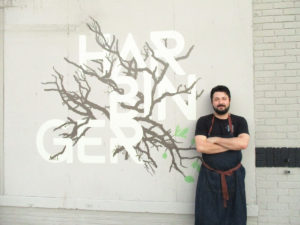 Joe Tripp at his Harbinger, our choice
as the top new restaurant in town.

Someday food-loving people will remember 2017 as a year of discovery and gravitas in central Iowa. More things changed faster than in any year of my four decades covering the food scene here. The previous high-water mark was 1986 when Bruce Gerleman resurrected the Court Avenue district and transformed the hours that downtown was open for business. This year was bigger because it covered the entire metro area. Construction in the food business is almost always a harbinger of generalgrowth and construction, and 2017 promised great things to come. The positive changes were seen across the board, too, with encouraging developments in food and water politics, sophistication of offerings, ethnic diversity, fast food originality, and new food identities for what once were suburban ghettos of neon signs and franchise-stunted taste buds. 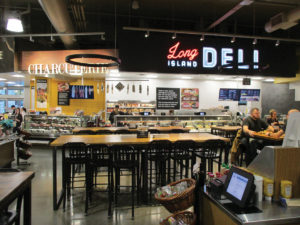 The yearâs surprises began back where so much did for downtown and the food scene â on Court Avenue. In February, Hy-Vee, the local corporate giant that recently ran its longtime local main competitor out of business, opened a 36,000-square-foot (small) Court Avenue supermarket with a 200-space parking garage. Downtown had watched grocery stores come and go before, but Hy-Vee built something unlike anything seen here before and unlike any other Iowa supermarket.

To reflect the fact that Iowans dine out more and cook less at home than ever before, the store resembles one of the great covered markets of America â Lexington in Baltimore, Reading Terminal in Philadelphia, and Ferry Plaza in San Francisco for examples. Like those storied places, the new Hy-Vee is a collection of small stations featuring high-end and prepared products for the modern lifestyle. It mostly reminds us of Eataly in New York and Chicago, in that it incorporates the template of those older, traditional markets in a thoroughly modern ambiance.

Among the sweet surprises one finds here: Kerri Rush, âthe wheatgrass ladyâ has a juice station; a prime rib aging room is visible to all who want to see their purchase age; a Volkswagen bus houses an excellent line of sodas from Brooklyn Heights Soda Co.; a âLong Island Deli,â modeled after Manhattanâs Katz Deli, sources its corned beef and pastrami from metro New York City; Italian Street Eats; Nori Sushi; a beer growler station; The Hibachi; Hickory House; the best of several Hy-Vee charcutuerie shops; and The Sweet Shoppe, which features freshly fried doughnuts â a local craze and âthe new cupcakeâ as food trends go. A fresh pasta station offers stuff that only a few restaurants serve. There is also a full Market Grille restaurant, with a large patio facing the downtown farmers market and, of course, a supermarket in the middle of all that with more fresh food and less packaged than in other Hy-Vees.

The second huge event this year was the opening of Outlets of Des Moines, a discount shopping center in Altoona. It features a Le Creuset store, the epitome of cast iron cookware that no one ever thought of as being a product for a discount store. There is also a Kitchen Collection store. Restaurants include Teriyaki Boys, Auntie Emâs and Charleys Philly Steaks. 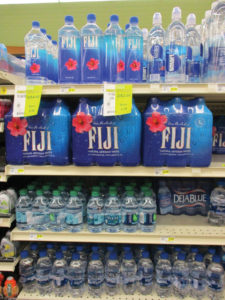 The biggest political story of the year was that clean water broke out as a mainstream issue. For years, Iowa Farm Bureau, and other supporters of industrial agricultureâs relentless pursuit of bigger crop yields at any cost, have portrayed the clean water issue as one of urban elitists and the Des Moines Water Works (DMWW) against hard-working rural folk. That profile unraveled last year.

The Iowa Department of Natural Resources labeled 253 community water systems as highly susceptible to the same nitrate pollution that threatens the DMWWâs 500,000 customers. Sixty-two of those systems draw water from the same watersheds that supply Des Moines. Thirty-nine systems were targeted for immediate action because their drinking water was already contaminated with high nitrate levels. The Des Moines Registerâs Iowa Poll found that a DMWW lawsuit against polluting agricultural counties was supported by a majority of Democrats, Republicans and independents across the state. It also found that a majority of rural Iowans supported it.

A University of Michigan study claimed that ethanol and other plant-based fuels emitted more carbon dioxide than gasoline did. Corn growers strongly disagreed. Duh. Water quality boosters got another jump start when the mercurial Art Cullen of Storm Lake Times won the Pulitzer Prize for editorial writing covering the water pollution subject in Iowa â the overall Pulitzer, not one for papers with small circulations. Rookie politician Josh Mandelbaum won a seat on the Des Moines City Council, beating a popular veteran and Democrat Party boss by 22 points. His public campaign zeroed in on one issue â water quality. Expect that to become a broader political issue in Iowa next year. Look for Mandelbaum to become a future player in the big ring, too. Hy-Vee contributed to this movement by announcing that it will eliminate more than 200 artificial ingredients and chemicals from its Hy-Vee label products within one year.

Following Waukeeâs example, Ankeny proved that good independent restaurants can coexist with franchised chains in the suburbs. After J Fetcherâs took on the challenge of building an indy in a former Dahlâs supermarket, other fresh concepts popped up all over that rapidly growing suburb. Whiskey House, Whiskey River, District 36 Wine Bar & Grille, Fongâs Pizza, and Main Street CafÃ© and Bakery all enlarged the townâs options. Ankeny also attracted some excellent franchises that were previously unknown in Iowa: Pie Five, Cowboy Chicken and The Original Pancake House. That latter place from Oregon incidentally outdates both International House of Pancakes and Waffle House.
The biggest story in marketing was bundling. Just as telecom and travel agencies before them, restaurants learned that they could sell more food by getting people to buy a discounted package of dishes. It is now rare to find a simple hamburger on a menu, you have to order a cheeseburger with fries, if not more, and, like a famous scene in the movie âFive Easy Pieces,â ask them to hold everything but the burger. It does not matter if you want cheese, or fries, you bought them. The new price of a burger in Des Moinesâ casual sit-down restaurants seemed to now be up to $12-14.

The biggest story in bigness featured Bruce Gerleman again. The man who created the Court Avenue District and now operates the Jethroâs BBQ chain has always hawked large things. His BBQs have been called âGateâs & Sonâs on steroids.â Portions are bigger, booths are bigger, knives are bigger, etc. Now he owns the largest restaurant in the Big 12 Conference area. His new Jethroâs in Ames has 16,000 square feet and took over an entire Aldiâs supermarket. Itâs also across the street from Hickory House, creating the stateâs, if not the entire Midwestâs, largest concentration of wood-inspired smoke.

Iowaâs legendary reputation for consuming huge numbers of calories without using knives, forks or spoons relaunched when state fair consumers downed 158,000 eggs on a stick, a record for a new product. 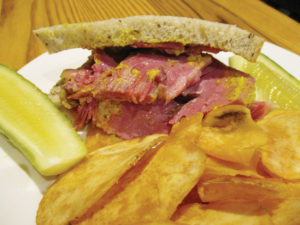 Half of a corned beef sandwich at Long Island deli.

Obviously, a really big year brings a lot of good new restaurants. Last year was no exception. Back on the barbecue trail, it was the year of Big Alâs in Des Moines. That superb Q on Hubble completed its first full year there and opened a second location, on Army Post Road. Both areas were underserved by good Q previously.

The South Asian subcontinent also enjoyed a good year here. Kathmandu brought Nepalese cuisine to S.E. 14th Street while Lzaza introduced the same part of town to Pakistani food. Everest though was the best of this new genre in that neighborhood with âthe food of the Himalayasâ including momos and thalis, particularly nice options for individual diners. Meanwhile, Spice Pot opened in Urbandale with cuisine based on that of Andhra Pradesh, Kerala, Mysore and Tamil Nadu in south India. 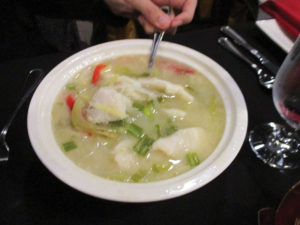 The sports bar genre marched on like there was nothing new under the sun. Except there was this year. The Range Grill & Bar allowed golfers to practice while eating and drinking. The Hall at The Foundry opened in an old rail yard storage warehouse with communal tables and a rotating series of food trucks including Top Bun, Karamâs Mediterranean Grill, Banh Me, Big Red, 515 Pi, Curbin’ Cuisine, Street Eats DSM, and Up in Smoke. More traditional was Pete Faberâs Barntown Brewery and Restaurant on the West Des Moines-Waukee border. Faber is an experienced Chicago restaurateur with an appreciation that sports bar food can be as good as any kind of food.
One beloved food truck is now a brick and mortar restaurant. The Spot owners opened The Walnut with the same great sandwiches and much more. Angry Goldfish, named for the crackers that are served as a snack and used as breading for pork tenderloins, made a splash on the southside.

Harbinger, our choice as top new cafÃ© in town, presented a unique cuisine from back-to-back James Beard semifinalist Joe Tripp. At his first place as owner/chef, Tripp invented a cuisine of small plates that incorporated Thai principles of including all six flavors, with mostly local ingredients. The restaurant offers unique takes on things like
rabbit, including rabbit stock, maitakes, sablefish, duck, duck egg and the seasonal vegetables of Iowa, including many extracts, bitters and pickles one will likely find nowhere else in the area. The cocktails are also as complex and interesting as any in town.

Doomed restaurant locations are an urban myth. No address is so cursed that the right food concept canât make it work. Look at Cool Basil. Its address averaged a new restaurant every year for five years before Liam Anivat took over and thrived. Same thing with Wellmanâs Pub on Ingersoll. This yearâs award goes to El Fogon, which  resurrected a place on Eighth Street in West Des Moines that had floundered four times since its glory days as Cabo San Lucas and Garciaâs of Scottsdale. May next yearâs winner be The Chalet, an excellent, but brand new, cafÃ©
in Valley West Mall where others have come and gone. And may the location recently ditched by Saintâs, Maverickâs and RDQ win after that.

CHEFS OF THE YEAR

Back in the days when Des Moines was seeing between four and six chefs and/or restaurants a year winning James Beard Award semifinal status, we determined to name a single top chef each year. Now that our annual ceiling has slipped to one for two years, we will go the opposite way and choose a top six who most impressed us this year: Joe Tripp, Lynn Pritchard of Table 128, Derek Eidson of Centro, Sean Wilson of Proof, David Baruthio of Baru 66, and Don Cotran of Pho 515. All those guys took chances with frequent, seasonal new menus last year. Cotran won both the judgesâ and peoplesâ choice awards for the second year in a row at The Iowa Asian Allianceâs Pho King Challenge. Wilson was named Iowaâs best chef by Time. DSM called Pritchard the chef of the year. Eidson is hidden in George Formaroâs huge shadow but butts out with more personal originality than other Formaro chefs. Baruthio builds an international reputation working with the best chefs in the world at special events. They all brought something new and unique to town last year. Most were in their restaurants when you showed up. Thatâs really important in Des Moines.

COMEBACK OF THE YEAR

PRIME RIB OF THE YEAR

The venerable B&B Grocery, Meat and Deli set a new record this year for single day sales of aged prime rib. More than 300 roasts were sold the Saturday before Christmas. B&B now custom ages beef for clients. One lady bought 30 prime ribs, one for each of her employees. ♦