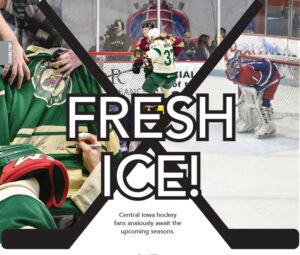 The building that is now known as Buccaneer Arena opened 60 years ago. Back then, the Des Moines Buccaneers didnât exist. Instead, the venue housed minor league professional franchises, but by the late 1970s, the rink was vacant and struggling to attract another team.

At this same time, the 1980 U.S. Olympic hockey squad stopped through for a one-game exhibition versus the St. Louis Blues of the NHL. The young Olympians were led by Head Coach Herb Brooks and were gearing up for what arguably became the greatest upset in modern sports history â defeating the Soviet super-team at Lake Placid and eventually winning the gold medal.

While in Des Moines, it was Brooks who first suggested to rink officials that a junior hockey team might be the right fit to occupy the space.

The hockey people in Des Moines listened, and the legendary coachâs advice eventually brought about four decades of Bucs hockey at what would become known informally as âThe Madhouse on Hickmanâ in Urbandale. But the Bucsâ special brand of madness will soon relocate to another big unoccupied building struggling for a solution â Merle Hay Mall. 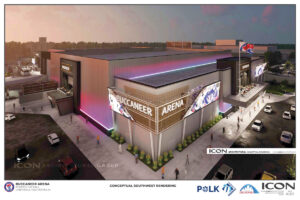 The plan is to install a total of four rinks along with bleachers. A 150-room hotel is also part of the proposed development concept. The hope is to host hockey tournaments at the new venue, as well as other entertainment options.

Details of the arrangement were still being hammered out as we went to press, but Nate Teut, the teamâs president, told CITYVIEW that they hope to break ground this summer and be in their new home in time for the start of the 2022-23 season. Deals with the City of Des Moines and the City of Urbandale are not final, and the total cost of the new development has yet to be determined.

âThere is still a process we have to work through alongside the City of Des Moines and Urbandale,â says Teut. âBut it is progressing.â

The fan experience should be improved thanks to upgraded lighting and sound systems at the new digs and club-level seating, according to Teut. Upgraded amenities for players are also expected, and there is the possibility for some sort of ice-level suites.

But not everything will be different.

âWe want to keep that intimate environment with that intimidation factor,â Teut explains. âWith the fans right on top of you.â

The site will have four total rinks â that number includes the featured rink that the Bucs will play on. An attached hotel is also in the works. Organizers envision a space that could attract regional or national hockey tournaments and concerts. Teut points out that the area lacks a mid-tier music venue of this size, and he says this venue could fill a void.

Buccaneer Arena has been home ice to the Bucs since the clubâs inception 40 years ago. But this summerâs derecho storm literally blew the buildingâs roof off. The damages led the team to start this season playing downtown at Wells Fargo Arena. Teut says the team should be able to return to its home after the first of the year.

Seeing the team compete on the uncharted-but-still-frozen waters of Wells Fargo Arena is a draw for some fans and a drawback for others. Teut says that he has heard a variety of fan reactions to the temporary arrangement. On the one hand, there are long-time fans who prefer the tradition offered at the old arena, but there are also fans who canât wait to see their team perform in the big house. And then there are still others who just want to see hockey, regardless of where it is.

The Bucs play in the United States Hockey League (USHL), the only Tier 1 Junior Hockey League in the U.S. Junior A hockey is the highest
level of amateur hockey before college. Most Bucs range in age from 16 to 20 and are working to earn collegiate scholarships. Many of the players travel a great distance to play for the team and live within the homes of central Iowa âhost familiesâ or âbillets.â The Bucs organization is one of the leagueâs most storied franchises â winners of four Clark Cups as playoff champions and four Anderson Cups as
the team with the best regular season record. The Bucs arenât paid to play, but many go on to earn a living chasing the puck. Central Iowa native Scott Clemmensen, a former goaltender for the team and Des Moinesâ most prominent homegrown hockey product, is one of at least 28 past Buccaneers who have gone on to lace up skates in the NHL. This seasonâs team features a trio of talented stars looking to follow Clemâs lead. After being selected in Octoberâs NHL draft, the following young guns now take aim at winning in the USHL, eventually playing
in college and then entering the professional ranks.

Sixth Round NHL draft pick: Las Vegas Golden Knights
College: UMass commit
Noah Ellis, Defense
Ellis might be the areaâs best prospect since Clemmensen, and the Urbandale native aspires to join his predecessor on the short list of central Iowa natives to play in the NHL.

Buccaneers Head Coach Peter Mannino returns after his first season leading the team was cut short due to the COVID-19 pandemic. Mannino looks to benefit from a front office addition and a familiar and steady hand who knows a thing or two about the USHL â Scott Owens. Owens is the eighth winningest head coach in USHL history and a former Bucs coach himself. He rejoins the team to serve as its senior advisor and general manager. Owenâs previous stint in Des Moines lasted four seasons and resulted in two Anderson Cups and one Clark Cup. More recently, Owens has served as head coach for the Sioux Falls Stampede since 2015 where he on a USHL championship during the 2018-19 season. Owens retired from coaching just a few months ago â finishing with a 729-454-116 (.606) head coaching regular season record.

âIâm here to assist Coach Mannino and his staff,â he says, plus a plethora of other duties.

IN OTHER LOCAL HOCKEY NEWS…

A Wild look ahead: Hoping to finish unfinished business; Feb. 5 targeted as start date for 2020-21 season.

âI just want to get back in the broadcast booth,â says Joe OâDonnell, the Iowa Wildâs play-by-play broadcaster, who is itching to see some hockey.

Last seasonâs premature ending to the season due to COVID-19 precautions was unsatisfying, but the teamâs on-ice success has fans anxious for the action to start anew. By the time the puck drops for the teamâs opener, it will have been nearly 11 months since last seasonâs stellar campaign was cut short. The teamâs playoff hopes became one of COVID-19âs first casualties.

âI donât think any of us on March 11 when we played our last game in Grand Rapids and got on the bus coming home that night â¦ thought we wouldnât be back until February of the following year,â explains OâDonnell.

The Wild team plays in the American Hockey League (AHL), one level below the NHL. Iowaâs organization supports the Minnesota Wild big league team, which is shooting for a January start with the AHL starting a bit later, Feb. 5.

The Wildâs plan is to have fans in attendance and to make it as safe as possible. Wells Fargo Arena is ready to welcome back hockey lovers by utilizing pod seating, increasing cleaning and sanitation efforts, and by requiring attendees to wear masks and practice social distancing. A full list of the fan safety protocols are available at www.iowaeventscenter.com.

âLast year was tracking as the best season in team history,â recalls OâDonnell. âWe were literally just a handful of points from clinching a playoff spot with 15 games or so to go when things were halted.â

The team was breaking records on and off the ice.

âI think the feeling around the locker room last year and around the organization was that we had a special group and one that could probably make a serious run at a championship,â he says. âEvery year you go into the playoffs and there are probably five or six teams that you think really have a chance. Our points percentage was top five in the league … given what I had seen, what the coaches felt, what our management team felt and how the players felt, we had a chance.â

Wild fans figure to see many players returning from last season. As such, fans have a right to be excited.

Experts expect Kaapo Kahkonen, last seasonâs standout goalie, to be back in Iowa.

âHe could obviously make Minnesota, but if Kaapo is here for any length of time, the team has a pretty good chance to be successful on the ice,â says OâDonnell.

âAnd then pretty much the entire D-core is back from last year,â he adds.

Tim Army will lead the team again as head coach. His first two campaigns have produced the two best seasons in franchise history.

âThe biggest thing is just trying to pick up where the organization left off,â says OâDonnell. âWe made the playoffs two years ago, and we were pretty much guaranteed a playoff spot last yearâ¦ I think the biggest thing, and I know Coach Army has stressed this, is finishing that unfinished business.â 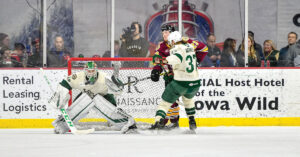 The AHL serves as the top developmental league for all National Hockey League teams. The NHL is the sportâs highest level of competition. Nearly 90 percent of current NHL players have played at one time in the American Hockey League, and more than 100 Hockey Hall of Fame members have laced up skates in the minor league. Iowaâs organization supports the Minnesota Wild. Iowa Wild home games are played at Wells Fargo Arena. For more information, visit www.iowaeventscenter.com.

As of CITYVIEWâs press deadline, the AHL schedule had not been released, but the league is targeting Feb. 5 as its preferred start date.

Promotional highlights will be in store for fans at the arena, but as of CITYVIEWâs press deadline, these werenât yet public. Typically, the teamâs promotional offerings include giveaways, family fun zones, pre-game live music, post-game ice skating opportunities and other unique ways to have fun. For more information, visit www.iowawild.com. ♦