Donât get too cozy; central Iowa has many fun things to do this winter. 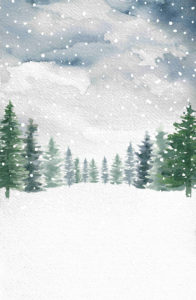 Iowaâs winter weather is predictably unpredictable, but, sooner or later, arctic winds eventually deliver freezing temps. Be that as it may… donât give in. Instead, get up. Get out. Get to laughing, living and loving life in the greater Des Moines metropolitan area. The cityâs offerings of arts, entertainment, shows and pizzazz donât hibernate and neither should you. So shake off the frost. Grab a sweater. Muff your ears. Whatever you need to do, it is time to embrace the events calendar bursting with opportunity for Iowa fun. CITYVIEW canât tilt the Earthâs axis to ensure more sunshine, but highlighting some of the local bright spots is the least we can do. Enjoy.

Culture. Creation. Graphic displays of life. Central Iowa now offers a scintillating buffet of world-class fine art, museums and galleries. A small sampling of the cityâs best is listed below. 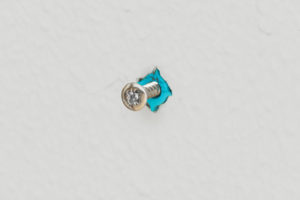 Susan Collis: âWithout You the World Goes Onâ
Opens Jan. 25, the exhibit will be on display from Jan. 26 through May 12
Des Moines Art Center, 4700 Grand Ave., Des Moines
www.desmoinesartcenter.org

A rickety old stepladder. A drop cloth. Both are splattered with paint. At first glance, this exhibit appears to be a nearly empty room that is under construction. But upon closer inspection, the attentive visitor discovers a whole lot more. Those splattered paint drops arenât as they appear. The workmanâs drop cloth isnât what you originally thought. Surprises abound within the âordinaryâ objects of Collisâ commentary regarding time, materials, labor and value. On Jan. 25, the Des Moines Art Center offers an evening of music, food and art as it celebrates the opening of the exhibition, Susan Collis: âWithout You the World Goes On.â Complimentary hors dâoeuvres and hosted beer and wine will be provided â all are welcome, but reservations are encouraged. The exhibit will then be available for viewing during regular museum hours, from Jan. 26 through May 12.

Art for the Wild is a fundraiser consisting of an art show and an auction. The event unites art enthusiasts and wildlife conservationists toward a common goal: saving animals in the wild. Proceeds raised at Art for the Wild help support Blank Park Zoo and the zooâs conservation efforts. The show features Dr. Amy Dickman, the founder of the Ruaha Carnivore Project.

If laughter is the best medicine, then central Iowa has the prescription for all ills. With the explosion of on-stage comedy in the Des Moines area, listing every event within this magazine wouldnât be possible, but the following are a few shows you might want to consider circling in red ink. 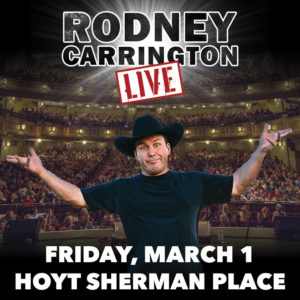 Rodney Carrington â the multitalented comedian, actor and writer â has sold more than 3 million comedy albums. According to Pollstar, Carrington has been one of the top 10 highest-grossing touring comedians for the last 10 years. He regularly performs to sold-out crowds, and he is coming to Hoyt Sherman. This event is for mature audiences only.

Funny Bone Comedy Club, 560 S. Prairie View Drive, Suite 100, Des Moines
Extremely intuitive since childhood, Cindy Kazaâs first memorable experience with a spirit came at the tender age of 10. After losing a childhood friend in a car accident, she awoke in the middle of the night to see that same friend standing next to her bed. Initially, she dismissed the incident, but in her early 20s, she realized she was having psychic and mediumistic experiences and began searching for answers. After significant training, Kaza now tours the nation offering her skills as a clairvoyant (clear seeing), clairaudient (clear hearing) and clairsentient (clear feeling).

WARNING: This highly caffeinated comedy, âTriple Espresso,â is in its seventh engagement at The Temple Theater. Three men tell their tale of their bid for fame and how it ended in four not-so-fabulous minutes of national-TV failure. Hugh Butternut, Buzz Maxwell and Bobby Bean recount their rags-to-rags odyssey and its hysterically bad results. 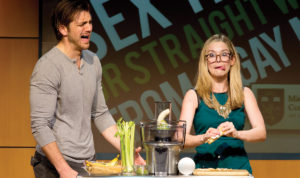 âSex Tips for Straight Women from a Gay Manâ is a romantic tale that takes the audience on a wild ride where no topic is taboo. The comedy plays Jan. 22 â Feb. 10 at the Temple Theater. Photo submitted

This romantic tale takes the audience on a âhilarious and wild ride where no topic is taboo,â as a gay man offers insider âtipsâ at a local universityâs auditorium where the English department holds its monthly meet-the-author event. The moderator, Robyn, is shy and studious. The featured author is Dan Anderson of âSex Tips for Straight Women from a Gay Man.â With the help of a hunky stage assistant named Stefan, Dan aims to turn this event upside down.

How do you make real connections in the city that never sleeps â but probably should at some point. This ârefreshingly honest and funny musicalâ tells the tale of four young New Yorkers searching for fulfillment, happiness, love and cabs. Directed and choreographed by Megan Helmers, featuring Charlie Reese.

Sherlock Holmes and Dr. John Watson confront the moors of Devonshire while working to solve the mysterious death of Sir Charles Baskerville. Based on Sir Arthur Conan Doyleâs 1902 novella, âThe Hound of Baskervilles.â This cast of 40 quirky characters is played by just five actors. 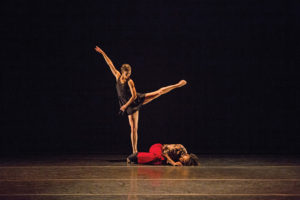 Established in 2012, Malpaso Dance Company has quickly emerged as one of the most sought-after Cuban dance companies. With an emphasis on a collaborative creative process, the company is committed to working with top international choreographers while nurturing new voices. The company tours with 11 dancers and is led by its original three founders.

Sibling rivalry, adultery and dungeons are all on display in the story of Henry II, his cunning queen Eleanor of Aquitaine, and their scheming children, that all have competing ambitions to inherit the kingdom. âEvery family has its ups and downs,â says Queen Eleanor, and this royal clan is no exception.

Dive under the waves while immersing yourself in a mystical, underwater world. You might even fall in love with a princess mermaid as she falls in love with a man. The Des Moines Community Orchestra will enhance the production by performing an original score. 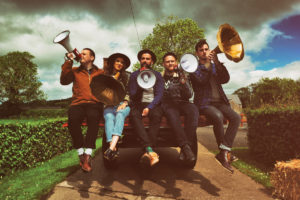 You gotta fight, for your right, to… Actually, central Iowa offers such easy access to live music, no fighting of any kind is warranted. Be that as it may, the following highlights would definitely be worth an arm-wrestling match.

âJoy to the world, the Lord is come!â OK, that was last month. But itâs still winter, and if you still feel like
worshipping â even with non-holiday-season songs â then Winter Jam is the jam. Many of Christian musicâs
hottest musicians, including Newsboys United, converge on Wells Fargo Arena for a $15 donation at the door â
no tickets required. Thatâs a bargain. The Jamâs 2019 lineup also includes former âAmerican Idolâ finalist Danny
Gokey, Mandisa, Rend Collective, Ledger and others. In addition, the Pre-Jam Party is slated to feature hip-hop
recording artist Ty Brasel, Manic Drive, Dan Bremnes and special guest Adam Agee.

When Blake Shelton realized that fans would benefit from hearing music from his friends and heroes, he decided to bring them along and created the âFriends & Heroes 2019â tour. Special guest Lauren Alaina joins Shelton for the run along with appearances by country icons the Bellamy Brothers, John Anderson and Trace Adkins.

âIf you want to destroy my sweater… Pull this thread as I walk away.â Weezer is coming to Wells Fargo Arena. Enough said. Except for this… âWoo-ee-ooh, I look just like Buddy Holly…â

Experience Dvorakâs masterful Ninth Symphony, live. This concert celebrates the vivid journey to the New World as immigrant heritage is brought to life.

Fun films. Hilarious comedies. Tear-jerking dramatic masterpieces. The upcoming slate of 2019 movies has something for just about anyone. Here are a few samples.

âLife isnât a science experiment. You canât contain your world forever. Try doing one thing that scares you…â Six complete strangers answer mysterious messages calling each to an âescape roomâ â a locked room functioning as a riddle, where freedom is only attainable upon finding its answer. But this roomâs game master knows seemingly everything about each of these strangers, and that includes some of their darkest secrets. Find the clues or die. Thatâs their challenge. Will they survive? 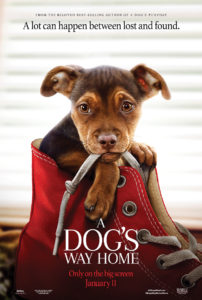 âA Dogâs Way Homeâ is a heartwarming tale of Bella, a dog who embarks on a 400-mile journey home after being separated from her beloved human. This film is an adventure aimed at entertaining the entire family.

Are they superheroes and supervillains? Or are their minds full of hypnotic delusions of grandeur? The third and final installment of the âUnbreakableâ trilogy finally arrives, and according to Mr. Glass (Samuel L. Jackson): âA lot of people are going to die. Are you ready?â M. Night Shyamalan has done it again.

Surviving requires every bit of cunning, inventiveness and strength that Gloria (Gina Rodriguez) can muster in this action thriller. And after being drawn into a dangerous world of cross-border crime, she finds a power she never knew she had. Based on the Spanish-language film.

NOTE: The following dates, times and other details are believed to be accurate, but changes are inevitable. Be sure to verify the information as the competition nears. 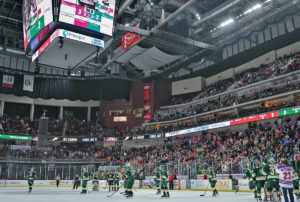 The Iowa Wild plays NHL minor league home games at Wells Fargo Arena. So far in 2019, the team is on pace to have its best season in franchise history. Photo by Iowa Wild

So far, so great, for the Iowa Wild. The minor league ice hockey team is having its best-ever season. The squad plays NHL minor league home games at Wells Fargo Arena. The puck drops at 7 p.m. unless otherwise noted. 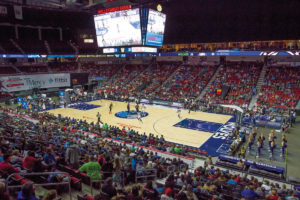 The Iowa Wolves compete in the NBA G League. G League rosters offer fans the opportunity to witness some of the best athletes in the world. The Wolves play home games at Wells Fargo Arena. Photo submitted

The Iowa Wolves run-and-gun against NBA G League opponents. G League rosters are chock-full of world-class
basketball talent angling for a shot at the big time. Tip-offs are at 7 p.m. unless otherwise noted. 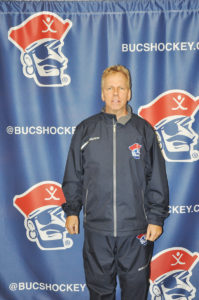 New Head Coach Gene Reilly leads the Des Moines
Buccaneers against Junior A amateur hockey opponents.
The team has played its home games at Buccaneer
Arena in Urbandale â also known as The Madhouse on
Hickman â since 1980. Photo by Jeff Pitts