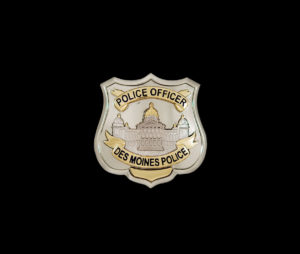 You canât turn on the TV, switch on a computer or exist within shouting distance of electricity without being electronically smacked by sirens, flashing lights and urgent-speaking media-types narrating a new controversy involving unseemly acts or heroic deeds of a police officer somewhere. But this story is not about any particular one of those outputs. Instead, this is a look at what it takes to be a police officer right here in Des Moines. Who sits in those patrol car seats? How much training did it take to get there? What made that person want to wear a badge? What attributes help to make a good officer or a bad one? If you have ever wondered why these men and women do what they do, this story is for you. Here we go… Just the facts.’

NOTE: The Des Moines Police Department (DMPD) is by far the largest law enforcement agency in the state, thus CITYVIEW focused on the DMPDâs prerequisites, qualifications, training and compensation. This is not intended to contain all-encompassing answers for every local police department.

Starting pay, perks and other benefits

The DMPDâs minimum starting annual salary for officers is $68,182, and that number gradually increases to $83,845 after four years. Compensation includes comprehensive health, life, dental and vision insurance, plus DMPD employees earn in line with a pension-based retirement plan. Other benefits include a retirement savings plan, tuition reimbursement, paid leave, sick leave, 11 paid holidays and 40 hours of vacation time that is usable after the first year. This number increases with logetivity. 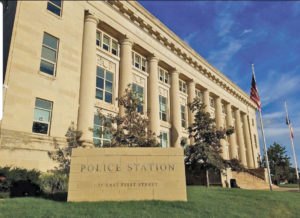 The four-day periods of time off are an attractive perk to many recruits, but other aspects of the schedule can present problems.

Originally, Senior Officer Andy Long worked the third watch, which runs 1-11 p.m., and he enjoyed working during those hours. But after being bumped to the overnight shift, the young officer struggled with daytime sleeping. The police belong to a labor union with rules that govern scheduling. After building up seniority, Long has returned to the 1-11 p.m. shift.

âYouâre going to sacrifice a little bit,â says Long in regards to working irregular hours. âBut thereâs also a silver lining. You work hard for four, five or six days… then youâve got to make the most of it when youâre home.â 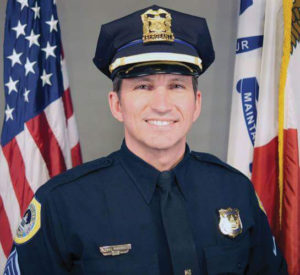 Sgt. Paul Parizek may have been born in
Texas, but he considers Des Moines his home.

While serving as spokesperson for the DMPD, Paul Parizek has become the face of the organization and is regularly seen on TV and heard on the radio. But the sergeant joined the force to help people.

âSometimes Iâd be out there driving around on a quiet night,â he remembers, âand Iâd be thinking, âThere is someone out there right now who needs help, and all they need to do is pick up the phone and here we are.â It can kind of eat your brain sometimes, but that is why you
keep coming back, for that moment when that person does reach out for help.â

âThe opposite of all of the above.â

Best or worst moment behind the badge?

Parizek has delivered or helped deliver two babies while on duty, and those are definitely highlights for him, but something else stands out more. 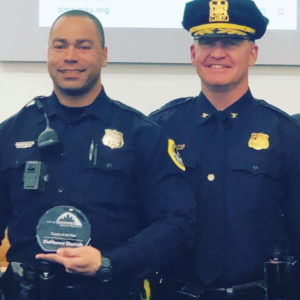 Senior Police Officer DeMareo Darrah is a family man and a self-described homebody.

âAnd I try to be a mentor when I can,â he adds.

The former all-state quarterback for East High School went on to a notable minor league football career while playing for the Des Moines Blaze in the Midwest Football Alliance. Darrah is the teamâs all-time team leader in every career passing and rushing category.

When he isnât on duty, Darrah can often be found volunteering for Des Moines Parks and Recreation. Last year, the officer was awarded the 2019 Volunteer Coach of the Year Award.

Darrah became a cop because of his desire to help people. He stays signed up for that same reason.

âI like to talk to all walks of life,â he says. âFrom homeless people, to people living in million-dollar mansions.â

Darrah lists empathy, honesty and character as qualities that make a good cop, but what makes a bad cop?

âSomeone who is very selfish,â he says. âOr someone who is in it for themselves or who likes the accolades.â

âI think those good moments are when you kind of deal with somebody, and at that time you donât realize itâs such a big thing. You know, youâre doing your job; youâre doing your thing like you normally do. You go through your stuff and help somebody out, and itâs on to the next thing. Then, a year later, that person comes up to you and tells you what a difference you made in their life. That little four- or five-minute talk session, or whatever you had, it changed their life completely. It made such a big impact. Those are the kinds of things I really enjoy.â ♦

What officer training is required? What makes a good police officer?

A day at the academy usually begins with some sort of physical fitness, which is a big part of the training. The department advises new hires about the requirements months beforehand and most prepare adequately, but some are forced to drop out.

After the morning exercise, the rest of the day is often spent in the classroom. The trainees learn types of âverbal judoâ or de-escalation techniques, crisis intervention methods, tactical speech and hands-on, scenario-based training. The officers also receive instruction from the Polk County Attorneyâs office and on too many other topics to list.

âWe want people with heart,â says Gretchen Hayes, a trainer at the academy. âIf you donât have heart, youâre not going to make it through here.â

âThe standards are high, and thatâs for good reason,â says Parizek. âOur community has high expectations for our performance, and they deserve that. … But the academy isnât about breaking you down; itâs about building you up.â

âWe donât lose the majority of our people,â says Hayes. âItâs a small percent (who fail). … We do everything we can to help you be successful.â

After completing the six-month academy training, officers begin patrol duties while riding with more experienced officers during a short probationary period. But Hayes and Parizek say that officer training is ongoing and never completely ends. 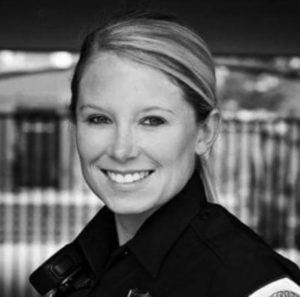 Senior Officer Gretchen Hayes is busy as a mother of five when she isnât training new officers for the DMPD at the Des Moines Police Academy.

When Gretchen Hayes isnât at the Des Moines Police Academy training police officers, the mother of five enjoys physical fitness and dining out with her husband at new restaurants while enjoying an occasional âgood whiskey.â

How did this Lincoln High alum find her way into law enforcement?

âI felt like it was Godâs calling for me,â she says. âIt was a strong urge. It wasnât just a matter of, âI want to be a police officer.â I just thought, âThis is what I need to do.â â

Hayes lists integrity, good morals, courage and common sense as important qualities for working as a police officer. She says selfishness, ignorance and arrogance are traits sheâd rather not see in her trainees. ♦

HOW TO GET HIRED?

Who does the DMPD look for?

No college degree or higher education coursework is necessary to get on at the DMPD. With that said, it should be noted that college coursework is needed for advancement up the organizational ladder.

âWe dropped that college requirement to broaden the opportunities for the people in our community,â says Parizek. âThe nice part about that is you can go to school when youâre here, and the City will pay for it.â

At least 30 credits are needed to advance to the rank of sergeant, detective or senior police officer. To be a lieutenant, captain or above, at least 60 credits are required.

Educated cops are better cops, in general, according to Parizek, but the sergeant is quick to point out that one of the best detectives he ever saw had a âdegree in auto body.â

If someone wants to be a police officer, the first thing to do is start researching.

âBecause weâre going to research you,â says Parizek. âWe welcome you to come down â now is not a good time with COVID â but reach out to us. If you think itâs a good fit, then you just keep your eye on the Cityâs website. You can actually sign up for alerts, so you can sign up and get an alert when the job opens.â

âAround the metro, weâre pretty competitive,â he says regarding officer compensation. âEvery local department can offer you something different, and thatâs why we tell people to research. A suburban department might be more your size, it might be more your fit or more your speed. But the larger the organization, the more options there are for you as your career goes on.â

For information regarding the recruitment and selection process, or to apply for employment, Parizek suggests visiting www.dsm.city/joindmpd.

And another suggestion by Parizek?

âIf youâre immature, if you still are not fully adult responsible, or if you think youâre getting into this business to kick ass and take names, this isnât the place for you,â he cautions. âThose days are gone.â ♦ 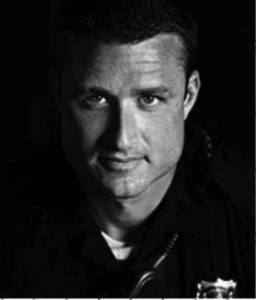 After graduating from college and spending three years working in an office, Andy Long felt the need for a change and moved to central Iowa to join the DMPD. Long is now a senior officer and works the third watch from 1-11 p.m. He also serves as the Sergeantâs Understudy in his squad.

After graduating from college, Andy Long worked a 9-to-5 job in an office atmosphere, but three years later heâd had enough.

Seeking more rewarding employment and an authentic reason to be excited about going to work every day led Long to police work. Prior to applying at the DMPD, heâd never been to central Iowa. The former Chicago-area resident is glad to be here, but why does he stay signed up?

âThatâs a good question,â he says. âEspecially right now. I was off for six weeks (after the birth of a son), so I thought a lot about that. … What keeps me coming back is that I believe in policing, I believe in the cause, what we do and our department and helping people and the people we work beside.â

âYou need to be honest and do the right thing,â he says. âYou have to be a good critical thinker and communicator.â

âJust all the people that you help,â he says. âYou donât always see the results of what you are doing, but you go home just knowing that you did the right thing.â

âWhatâs so important, I think for all of us, is our families who have gone through a lot,â he says. âSo, just a shout out to all the families who are out there to support us.â ♦