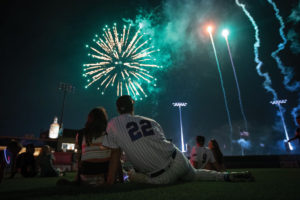 Fireworks are on the agenda following
each of the Iowa Cubs Friday home games.
Photo by Dylan Heuer/Iowa Cubs

Relaxing at Principal Park while sipping something cold and watching Americaâs hottest up-and-coming baseball talent is a summer staple in central Iowa. Triple-A baseball usually begins in April and runs through August and into September, but due to the spread of Covid-19 as CITYVIEW went to press, Minor League Baseballâs first pitch was put on hold.

âWith the health and well-being of the players, umpires, team employees and our fans in mind, we will continue to monitor the developments and follow guidelines set forth by public health agencies and our partners at Major League Baseballâ¦ Once the public health experts and agencies have decided it is safe to begin the 2020 season, and the players are physically ready to begin the season, we will do so.â

Likewise, the I-Cubs will follow the lead of MLB, Minor League Baseball and the CDC, according to a team spokesperson.

As such, this 2020 I-Cubs season preview might be a tad early, but what better way to spend some unexpected downtime.

The top 8 questions regarding I-Cubs baseball for 2020

The opening date for the upcoming season at Principal Park may be unknown, but sooner or later â hopefully sooner â players adorned in classic blue, red and white uniforms will sprint onto the field to the delight of hometown fans. When that happens, it will mark the 52nd year of Triple-A baseball in downtown Des Moines. Located near the confluence of the Des Moines and Raccoon rivers, Principal Park, along with its two predecessors, have hosted professional baseball games since 1947.

1. Going from worst-to-first and winning a division title, how did last season happen? Can fans expect the winning to continue? 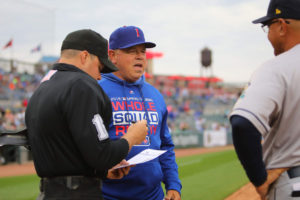 Marty Pevey returns for his eighth consecutive season as I-Cubs manager. During Peveyâs tenure, the team has notched 479 regular season wins, which is a franchise record. Photo by Dylan Heuer/Iowa Cubs

BACKGROUND: Last seasonâs Iowa Cubs rolled to a division championship while posting a regular season record of 75-65. The team was eventually eliminated by the Round Rock Express in Game 5 of the PCL semifinals, but it was the franchiseâs third 75-plus-win season in the last decade, and it was a major improvement from the teamâs dismal 2018, when the team finished with the worst record in all of minor league baseball.

QUESTION: How did that happen?

BACKGROUND: Having that much big-league firepower is a good problem to have, no doubt, but only five I-Cubs players were active for the entire regular season, and the I-Cubs made a franchise-record 232 transactions. The ever-revolving roster tallied 72 different players, in all, and getting that many moving parts to mesh means someone did a top-notch managerial job.

QUESTION: Who was the managerial mastermind melding the team together, and will he be calling the shots for Iowa again this season?

ANSWER: Marty Pevey returns to skipper the I-Cubs for his eighth consecutive season in 2020. Pevey is the longest tenured manager in Iowaâs history and has notched a franchise record 479 regular season wins.

âYou donât normally have minor league baseball managers in one place for this long of a period of time,â says Cohen. âThe common conception is that, if heâs here that long and not in the big leagues, then heâs not good enough to be in the big leagues. Thatâs not the caseâ¦ Marty has the perfect demeanor and the perfect mindset to mold Triple-A minds.â

One key to Peveyâs success, according to Cohen, is communication.

âYou have to keep the guys motivated,â he says. âYouâre as much a psychologist as you are a manager.â

Another important attribute for minor league managers is temperament. With so many roster moves, managers must recognize the franchiseâs role is to further the success of the big league club.

âYou have to be able to adjust,â says Cohen. â I think Marty does that better than anybody in the business.â

BACKGROUND: The 2019 I-Cubs team had a lot of turnover, but five players went coast to coast, playing for the team all season.

QUESTION: Will any of those fantastic five be back?

ANSWER: Cohen says each of the five played a big part in 2019âs success, but the nature of minor league baseball makes it impossible to know for sure who will land where until after spring training, but here are a few quick thoughts.

â¢ Pitcher Colin Rea went 14-4 with a 3.95 ERA in the regular season and earned PCL Pitcher of the Year honors. The Cascade, Iowa, native and right-handed starter was originally a 12th-round draft pick by San Diego in 2011 before signing with the Cubs as a free agent before the 2019 season. He will battle to make the big league club and could end up in either Iowa or Chicago.

â¢ Pitcher Matt Swarmer joined Vida Blue, Bill Brennan and Paul Abbott by notching 137 strikeouts last season. The fireballer is only the fourth I-Cub ever to accomplish that. He figures to play for Iowa this season.

â¢ Infielder Trent Giambrone led the I-Cubs with 17 stolen bases and belted 23 home runs in 2019. Giambrone possesses rare talent but is predicted by many to spend another year honing his skills in Iowa.

â¢ Infielder Phillip Evans moved on to the Pittsburgh Pirates organization during the offseason.

â¢ Outfielder Donnie Dewees will most likely begin the season as an I-Cub in 2020.

4. Who is the most talented player who could be in an I-Cubs uniform this season?

BACKGROUND: Nico Hoerner is the most talented player within the Cubs farm system, according to most experts. Chicagoâs 2018 first-round draft pick makes good contact, drives the ball hard to all fields and generally looks to be as good or better than originally thought.

QUESTION: Can fans expect to see the young shortstop playing at Principal Park in 2020?

ANSWER: After the big-league club was decimated by injuries late season, the young shortstop made the jump from Double A all the way to the MLB and performed relatively well considering his age and experience level. During his 20-game stint in Chicago, Hoerner hit .282 with three home runs. As a result, Cohen says Hoerner is contending to earn a Chicago roster spot, but, most likely, he figures to be a year away from making a big-league opening-day roster.

âI think the organization is going to try and get him every day at bats,â says Cohen. âIf thatâs up in Chicago, then great. But if itâs in Iowa, I think the fans will be very happy about that.â

5. Who is the next curious case of Robel Garcia? 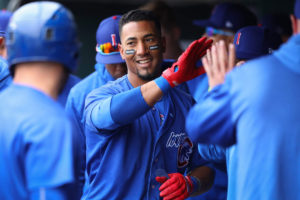 Infielder Robel Garcia emerged from being completely removed from big league baseballâs radar to playing for the Chicago Cubs in 2019. Photo by Dylan Heuer/Iowa Cubs

BACKGROUND: Infielder Robel Garcia emerged from seemingly nowhere this past year. After the switch hitter was released by the Indians following the 2013 season, he fell off the face of the baseball map until he grabbed the Cubsâ attention in fall of 2018 while playing for Team Italy. The 26-year-old began last season with Double-A Tennessee and stroked five home runs in his first 15 games. The diamond-in-the-rough was then promoted to Iowa where he caught fire in late-May and eventually ascended to Chicago, where he remained until August. Garcia received a second call-up in September and was named Minor League Baseballâs co-Breakout Prospect of the Year during this past off-season.

QUESTION: Which relatively unknown player could emerge from nowhere to contribute at the sportâs highest level?

ANSWER: âItâs hard to find the next Robel Garcia,â admits Cohen. âThose guys donât fall off of trees. But I think Trent Giambrone fits that mold. He has big-league potential.â

6. Where in the world will Ian Happ and Addison Russell be? 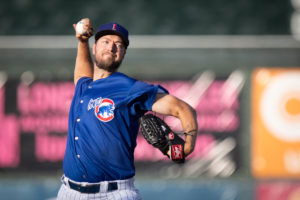 QUESTION: Will they be back?

ANSWER: The switch-hitting and highly regarded Happ endured a three-and-a-half-month stint in Triple-A, but the slugger eventually found his stroke and returned to the bigs. The 2015 first-round pick is expected to continue producing at the plate and stick in Chicago, probably as a starting outfielder. On the other extreme, Russell is no longer employed by the Cubs organization, and he hadnât signed with a new team as of CITYVIEWâs press deadline.

QUESTION: Just shy of a half million people rolled through Principal Parkâs turnstiles last summer. The ballyard now boasts an all-time attendance total that tops 13.5 million, which brings the central Iowa 51-season total attendance to nearly 18 million for Principal Park and its two predecessors. But thatâs in the past. Whatâs new at the ballyard?

ANSWER: This offseason, in an effort to increase fan safety, the I-Cubs completed construction on additional protective netting. The netting runs nearly the length of each foul line. The precautionary additions were not required and cost roughly $90,000, but the Iowa Cubs, in conjunction with the City of Des Moines, decided it was the right thing to do. The addition wonât hinder the fan experience, according to Cohen, but it does enhance safety significantly.

â(Principal Park) is the best,â he says. âItâs exactly what Triple-A baseball is supposed to beâ¦ Its atmosphere is unparalleled in minor league baseball.â

8. Dogs Days, hotdogs and other promotions to look forward to. 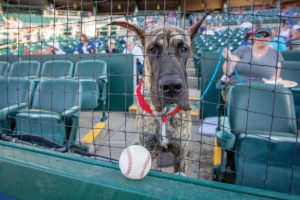 Furry friends invade Principal Park during the teamâs Dogs Days, one of the teamâs most popular events. Photo by Dylan Heuer/Iowa Cubs

QUESTION: What promotions can fans look forward to for the upcoming season?

ANSWER: When someone originally pitched the idea of the I-Cubs hosting a âBring Your Dog to the Ballparkâ night, not everyone immediately saw the logic, but Dogs Days has been a grand slam so far for Iowaâs canine-loving baseball fans.

Dogs get in free during these dates and enjoy the pre-game pet parade on the field when each canineâs name is announced through the P.A. system. Prior to the seasonâs postponement, the team was set to host two such Dogs Days dates this summer.

As CITYVIEW went to press, much of the schedule and specific promotions were still in flux. Be sure to check online for updates and changes, but the teamâs original home schedule included the following highlights. All dates, times and other details are subject to change. ♦