CITYVIEW readers will choose a winner from a hefty list of delicious pies. 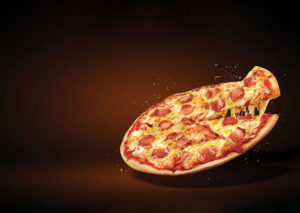 Favorite foods define cities. New York is a steakhouse town representing the power and energy of the city. San Francisco is a cioppino city built by the labor of its immigrant sailors and fishermen and its great bay. New Orleans is a po boy place because that sandwich is as rich or humble as its devourer might be.

Interviewing the late architect Chick Herbert two decades ago, I asked him about the success of his design for the Civic Center, which often leads the world in attendance for an arena its size. He mentioned its democratic design, no aisles, balconies, boxes, valet stations, etc. Those things make people feel superior or inferior to their neighbors, and Iowans donât like that. We like to think we are all in it together. That is why caucuses suit us better than primaries.

This is why Des Moines is a pizza town. The dish represents the democratic nature of Iowa, while celebrating our Italian heritage and our love of sharing. CITYVIEW celebrates our love of food by letting readers select an ultimate version of a favorite type of food or restaurant. When pizza has been the subject, we receive exponentially more votes than with other foods. Central Iowans are passionate about pizza and particularly about their favorite pizza. New Yorker magazine food writer Calvin Trillin has written that most peopleâs favorite pizza is associated with their youth. That explains why so many pizza joints here have maintained a loyal following for decades. Noahâs, La
Pizza House, Chuckâs, Barattaâs, Mama Laconaâs, Bordenaroâs, Pagliaiâs, The Hilltop, The Tavern, and Johnnyâs Hall of Fame have all been around five decades or more. Thatâs an astonishing tradition for a town our size.

Pizza has been called Mussoliniâs revenge. The Italian dictator didnât fare too well in World War II, but since then, the Neapolitan dish has conquered Iowa and most of the rest of America outside Brooklyn in New York, Federal Hill in Providence and North Beach in San Francisco. Before that war, pizza was either obscure or unknown in Des Moines and most of the rest of the nation. Today itâs ubiquitous, being made from scratch in convenience stores like Caseyâs and Kum & Go, in neighborhood bars like County Line CafÃ© and Chicken Coop, in polished wood palaces like Mama Laconaâs, and in mobile ovens like Parlo Pizza. Home delivery is big again thanks to delivery services like UberEats, particularly to college students. Gargantuan international chains like Pizza Hut, Dominoâs and Papa Johnâs arenât the only choices for home delivery anymore. Fiaâs, G. Migâs and Noahâs are gluten-free pizza pioneers. Build-your-own places like Blaze are bringing down prices and allowing picky eaters in the market. 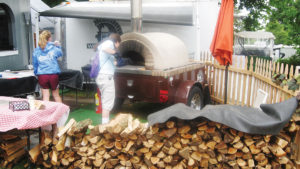 Parlo Pizza takes its wood-burning oven on the road.

None of this diversity should surprise us. Pizza has always been a flat out contradiction. Itâs a âfast foodâ that can take hours to prepare, a âpieâ we eat as a main course, and a relatively ânewâ food â at least in Iowa â thatâs as old as civilization. Babylonians, Israelites and Egyptians were all cooking flat, unleavened bread in mud ovens 4,000 years ago. Greeks, Romans and Egyptians were topping it with olive oil and native spices before the birth of Christ. The word âpizzaâ is already plural, yet most Americans use it as a singular word and add a redundant âsâ to pluralize the hell out of it.

In the dramatic lore of Italy, the invention of pizza happened after Roman soldiers in the Levant tasted matzo and decided it lacked âfocus,â the Latin word for hearth. So they threw it in a fire along with oil, herbs and cheese to
birth the first âpizze.â Some 1,500 dark years would pass before Italians improved much upon that, after tomatoes had found their way from the Valley of Oaxaca to Naples in the 15th century. Neapolitans had been eating tomatoes
for 100 years when Ben Franklin started warning Americans that they were poisonous.

The modern pizza era began in 1830 with the opening of the worldâs first pizzeria â Napleâs PortâAlba â where the oven was lined with lava from Mount Vesuvius. That restaurant, still operating today, replaced street vendors who would bring their pies outside on small ovens balanced on their heads. Originally, PortâAlbaâs most popular pie was Mastunicola, made with lard, sheepâs milk, cheese and basil. In 1889, pizza genius Don Raffaele Esposito created a pie for Queen Margherita of then-recently unified Italy. He used only tomato, basil and mozzarella to replicate the colors of the new Italian flag. That original Margherita pie has remained the western worldâs basic template for pizza
ever since.

Gennaro Lombardi opened Americaâs first pizzeria â Lombardiâs Napoletana â in New York City in 1905, but the dish didnât catch on beyond Italian neighborhoods in America until after World War II. During that war, Naples became a major base of operations for American armed forces. Then G.I.s brought a pizza craving home, and Mussolini laughed in his grave. 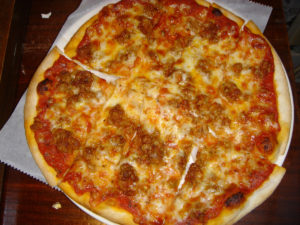 Noahâs pizza pie is likely the oldest in Iowa.

Most Italians who settled on the south side of Des Moines emigrated from the south of Italy, Calabria and Sicily. That part of Italy, Il Mezzodi, is rich in olive trees and wheat and is sunny enough to grow tomatoes â everything needed for good pizza. By the mid-1950s, sons of Calabria dominated the Des Moines restaurant scene. One of them introduced the old âMezzodiâ dish to Iowans.

The Calabrese Lacona family opened Union Station restaurant downtown in 1946. One year later, Noah Lacona opened Noahâs Ark on Ingersoll using his mother Teresaâs recipes. He personally designed a gas oven that simulated the wood-burning ovens of southern Italy and a pie-making machine that duplicated Neapolitan crusts. By 1947, Noah was serving some of the first pizza in Iowa. Within a few years, pizzerias like La Pizza House, Chuckâs and Mama Laconaâs were opening across Des Moines. Happily, they are all still open today. Chuckâs even uses its original pizza oven. It produces a âtavernâ style crust â thin, yet crisp enough to remain parallel to a bar top when held by its edge. Early pies in Des Moines were all thin-crusted, but some were pliable enough to bend in half and eat like a calzone. That is sometimes called âNew York style.â 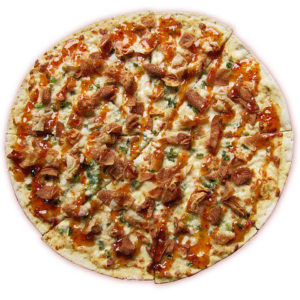 Anachronism goes well on pizza, which has, after all, been appropriated from older cultures for millennia. Controversy goes well with it, too. For most of the time since Des Moines became a pizza town, people have argued about which places make the best pies. Only a consensus can settle such food arguments, so CITYVIEW returns to pizza a third time for its Ultimate Place for â¦â contest. After playoffs for readers to select their favorite sandwich place, steakhouse, place for noodles, burgers and barbecue, we are putting Gusto and Taste of New Yorkâs titles as the Ultimate Place for Pizza up to the challenge of repeating.

This year we started with a list of diverse places from across the metro and posted them in an online poll, asking readers to choose their favorite. That list has been reduced to 64 at this time for this contest. Eight years ago, we began with 48, showing the pizza scene has exploded here. The controversy is now in readersâ hands. The number of restaurants will be reduced by half every couple weeks, until we have a new winner, which will be announced in the Food Dude column in our October issue.

Many restaurants on the original list are old school Calabrese. Three of them â Noahâs, Gusto and Mama Laconaâs â are owned by descendants of Teresa Lacona. Politoâs La Pizza House still serves its unique rectangular pies, which might well be the second oldest in Iowa. That restaurant has moved a block or so away from its original venue.

As Trillan noted, pizza is not an acquired taste. Many people associate the dish with nostalgic memories and still love the first pie they ever ate. (For me, that was a pie made from a Chef Boyardi box, not the same recipe as today.) It is well known in Des Moinesâ restaurant world that if there is a high school class reunion in town, traditional pizza joints close to the high school (Noahâs-Roosevelt, Chuckâs-North, Paesanoâs-Lincoln) will be packed.

College memories of pizza are spreading beyond campus. Pagliaiâs opened its first pizzeria in Ames in 1957 and had been serving pies in taverns for a few years before that. Like most college towns, Ames is now rich in pizza joints, but Pagliaiâs has moved to Johnston as well as to many other college towns. Iowa City-based Wig & Pen and Cedar Fallsâ The Other Place are now delivering their college magic to the metro. Leaning Tower of Pizza and Pagliaiâs have Tuscan connections and roots. Others with long histories are associated with a specific style of pie â Felix & Oscarâs with Chicago-style deep dish, The Tavern with a prize-winning thin crust. More recently, true New York-style pies became popular thanks to Centro, which brought the first Brooklyn-style coal burning ovens to town â something that is becoming extinct in New York because of environmental controls. Taste of New York came to West Des Moines with oversized Brooklyn-style pies, sold by the slice as well as whole. NYC Pizza CafÃ© also adds to this school.

Some of the top bistros in town have become more experimental with pizza menus. Eatery A slings wood oven Mediterranean pies (half-price at happy hour) that employ North African flavors from merguez (lamb) sausage, figs, sumac and dates, as well as flavors from the northern edge of the sirocco winds like charcuterie, guanciale, lardo and Italian sausage. Trostelâs Dish is famous for its cracker crust pies with more traditional toppings plus an apple, Brie and caramelized onion masterpiece. Cosi Cucina Italian Grill, which introduced Des Moines to wood-burning, brick-oven pies, offers its famous baked garlic and wild mushrooms as toppings. Fongâs Pizza and Tiki Bar brings Chinese-American verve to the community pizza table with sweet and sour, teriyaki, crab Rangoon etc. Simonâs employs smokehouse meats for which they have long been famous. 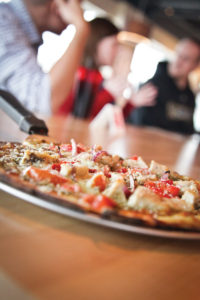 The pies at Gusto Pizza Co. are some of the most unique, made-from-scratch pizzas in central Iowa. Options include lifestyle and health choices such as vegan Mozzarella and gluten-free crusts. Photo courtesy of Gusto Pizza Co.

Pizza in Des Moines reminds me of the Billie Holliday song âAinât Nobodyâs Business.â You can stay out late one day, eating it at wee hour specialists like Big Tomato and Fongâs, then you can go to veritable church on Sunday with faith-based pies. Rock Power serves pizza with a healing, Christian charity. They feed the homeless for free each Monday and received a big contribution and much publicity from Ellen DeGeneres. Northern Lights similarly pairs pies with a philosophy from Hope Ministries.

So who are the favorites to win? Since the original contest, the field is stronger. Still, you have to beat the best to be the best, and previous winners Gusto and Taste of New York look formidable again. John and Katrina Pagliai left Lucca, Italy, in 1914 and settled in the coal mining town of Zookspur, Iowa. That is a ghost town today, but Pagliaiâs Pizza restaurants go through 12,000 pounds of cheese, 9,000 pounds of flour, and 1,000 gallons of tomato sauce each month keeping customers happy. Thatâs a lot of love.

So hereâs your field. Together, they represent the flat out contradiction that is pizza. There are a lot of different styles here. Yet, itâs no problem for Iowans to love them all, because they take many slow steps to turn out superior products. Good luck choosing, readers. ♦