It was a birthday I will never forget.

I woke up on the morning of my 16th birthday like I did any other day and got myself ready for school. But 20 years ago in my hometown of Aurora, Illinois, Sept. 11 was anything but a typical day. My first class was biology where I sat next to a cute girl named Clarice (yes, like âSilence of the Lambsâ) and Big Gay Frank, who had recently just moved there from Germany. Clarice and Frank brought me a cupcake and tied a black heart balloon to the back of my chair as a birthday greeting. As the morning rolled on, the black balloon became even more appropriate.

The morning announcements kicked in but were longer than usual. Our teacher was losing patience with this lengthy broadcast that was eating up her instruction time. Once the announcements ended, she began with her own agenda when the messages started up again. âAre you kidding me?â she said bluntly. The speaker followed with, âThere has been a terrorist attack on the World Trade Center.â We turned on the TV in our classroom and saw the smoke from the first impact. Moments later, we watched the second plane fly into the structure.

The rest of the day was as melancholy as you might imagine. All but two of my teachers skipped out on their lesson plans to watch the news. The two who didnât were the driverâs education teacher who was the P.E. teacher with the black mustache and abnormally small khaki shorts and an amazing journalism instructor who would go on to become an accomplished author. I wrote for the school newspaper at the time, and our instructor told us that this tragedy would become a lifetime memory. She was right. We covered it, watching the news and taking notes. We didnât know what to expect when we went home. Many of our parents worked in Chicago, and the commuter trains were shut down. There was a huge impact on the suburbs. Throughout the coming weeks, we interviewed as many students and teachers as we could to find out what was going on in everyoneâs head. It was surreal. 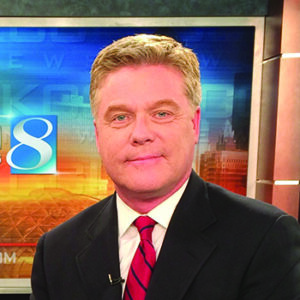 Todd Magel and his wife, chief photographer Donna Smith, covered the Sept. 11 attacks for KCCI. He recalls covering all the people who were stranded at the airport and a nine-block-long line of cars of people who were donating at the blood center.

In Des Moines, 212 miles away, Todd Magel was asleep after working the night shift at KCCI. His wife and chief photographer Donna Smith was already at the station. Between the two of them, they were working around the clock. The first plane hit. Smith didnât want to wake her husband just yet as she knew the day was going to be crazy. The second plane hit. Then the Des Moines Airport was gridlocked with planes that were grounded. All the rental cars were sold out, and passengers were stranded. This was happening around the world. Magel woke up and went in to work along with the entire KCCI staff.

âAll the major news networks had taken over by this point,â says Magel. âWe were getting our footing and finding all the local angles we could. This started with all the people who were stranded at the airport. Then it shifted to the nine-block-long line of cars of people who were donating at the blood center.â

Magel says people in central Iowa were trying to do whatever they could to help those in New York.

âThen we started getting information on the Iowans who were stuck in other states and other countries. Then, finally, we started to learn about the Iowans who lost their lives,â says Magel, who now has 39 years under his belt covering other major events including the floods of 1993 and COVID-19. 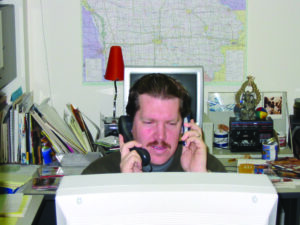 Buffalo Bonker worked for The Des Moines Register as a graphic designer. On Sept. 11, he became a truck driver and newspaper hawker, too.

Buffalo Bonker worked for The Des Moines Register for 12 years. He wasnât a reporter. He worked in the graphic design department.

âI was only going to be in the office for a few hours that morning as I had volunteered to go with my stepdaughterâs class to the Apple Orchard on a field trip that day,â he recalls. âI was catching up on emails and overseeing the start of the morning in my seventh floor corner office that I shared with my co-manager Gary.â

Outside of Bonkerâs office were graphic designers who built the ads for the newspaper, and beyond them were the sales staff and assistants. Bonker was worried about falling behind on the emails from the staff, so he came to work for a few hours to make sure things were set before heading off on the field trip.

âSometime around 8 a.m., Mike, the designer who sat just outside our door with his headphones on listening to Mancow Muller every morning, popped his head in and said âa plane just hit the World Trade Center. They just said that on the radio.â I remember that short window of time before the second plane hit where it was presumed it was just a small four-person private plane that had made a grave mistake. The few photos that I remember seeing could not convey the scale of the hole or smoke coming from the tower. It didnât seem like that big of a deal to us. Then the second plane hit. Now it wasnât an unfortunate small accident.â

Bonker then left the office to head to Norwalk to take his stepdaughter to her field trip. He learned about the hits on the Pentagon, how the White House was evacuated and a plane crash in a field in Pennsylvania. Local residents had concerns that there were more targets, including tall buildings like 801 Grand or even the Des Moines Register building. Nobody yet knew how many planes there were.

âI stayed in contact with work while calling the elementary school at least three times waiting for them to cancel the field trip so I could go back to work,â says Bonker. âThe school finally decided that the field trip would go on and that they would not tell the children anything and allow parents to handle it. I worked for a newspaper, and my generationâs Pearl Harbor was unfolding. This could possibly be the largest news event of my lifetime, and I was scheduled to stand in an apple orchard with no communication with a bunch of first graders having a good time. I finally explained to the school that as someone who worked for a newspaper, I had to go back to work.â

The Register staff was working on printing a special edition, but the print facility did not have trucks or drivers available to deliver it downtown. Truck drivers worked overnight getting the daily paper out, which at this point had been delivered to peopleâs doors just hours earlier.

âI drove a little Ford Ranger, so instead of heading downtown I backed my pickup to the loading dock to facilitate at least one small compact truckload of papers getting to the main offices,â Bonker says. âI waited inside while we all watched and listened to news unfolding.â

Bonker says things were changing so quickly that the Register never ended up printing the first special edition that he was planning to pick up, so he headed back to the office.

âThere was a line around the block of downtown workers waiting to get a special edition. Many people were saying âItâs just not real until we see it in the paper.â Everything we saw on TV just felt like Hollywood special effects, but when itâs in the paper, it is history,â he says.

âI went downstairs and watched the van pull in. The process wasnât working fast enough, so I helped by grabbing bundles and walking down the line of people handing them out and shoving the loose dollars into my pocket until the papers ran out.â

Here we are 20 years later. I will turn 36 on Sept. 11, 2021, and the memories are as vivid today as they ever have been. I am writing this column during my lunch break while on a movie set where we are all separated due to the COVID-19 Delta variant burning through our population. Yes, our world sees trauma, and we pivot. Sept. 11 was, for my millennial generation, the day we saw our world grow up. Letâs hope we donât have to grow up like that again. ♦