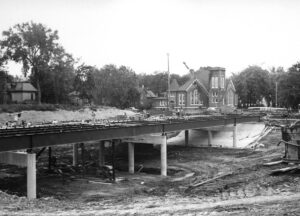 Many most of us take for granted that we can get most anywhere in the metro area in less than 20 minutes. We are all used to waiting until the last minute to go somewhere because we can hop onto I-235 and hustle our way to our pre-determined destinations quickly. Even as our morning and after-work commuter traffic has matured, we are still not Chicago, Minneapolis or Kansas City. Maybe our commute goes from 20 minutes to 30 minutes. It is still nothing.

Before we get into all the nitty gritty for this monthâs column, I want to share a quote from Des Moinesâ long defunct afternoon newspaper.

âThe citizens of Des Moines reacted a bit slowly when news of the proposed freeway broke in December 1956. It was too much to digest in one sitting.â â Des Moines Tribune Tuesday, May 13, 1958

All I can think of is a few old white guys in the slowed down southern Iowa twang that I adore so much, âNow you just slow down here. You want to do what? A freeway? Free for who?â

Can you imagine what life was like in Des Moines without I-235? No freeway, just a country road that slowly turned into a city. Every stoplight and stop sign preventing you from succeeding in your time-sensitive hopes and dreams. Imagine a school bus holding up 15 cars just a block away from your destination, and once that last little one boards the bus and it takes off, you get held up by the stoplight. What did you do to deserve this? Fortunately, that is not our reality today. 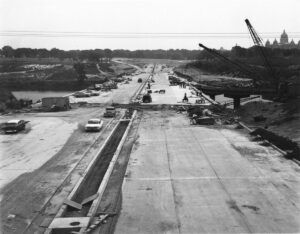 The Des Moines city council approved the freeway in 1957 with a 5-0 vote. Construction began in 1960 and took eight years to complete. In October of 1963, the city council named I-235 after the two former Des Moines mayors: John MacVicar Sr. and John MacVicar Jr. To be honest, I had never heard it called this until CITYVIEW publisher Shane Goodman mentioned it to me. Both former mayors (father and son) had held positions as street commissioners prior to becoming mayor. This was an early Des Moines dynasty that is not mentioned much these days. The whole construction finished eight years ahead of schedule. The freeway opened in sections beginning in December of 1961 with Cottage Grove east to Keo and ending with 63rd Street West to I-35 Junction at the end of October of 1968.

Anni Zika of Des Moines has these memories of the construction of the MacVicar Freeway: âI remember growing up on 35th Street. It was exciting having a freeway built just a couple blocks from our home. We were able to watch construction from our house. I talked to my brother Jim about it, and he said there were some headaches involved also. He had a best friend and a girlfriend who lived on Crocker, and it was just a 5-minute walk to their houses. But once the freeway was being built, it turned into closer to a half-hour walk. Once it was built, it was awesome getting from the west side to the east side. When I was in high school, my girlfriends and I dated guys from other schools around Des Moines, so it made that a lot more convenient.â

Folks who live on Polk Boulevard and other west side neighborhoods may not realize that the bridges that go over I-235 used to have homes there.

Jeanie Sheldon of Waukee remembers: âA lot of people with expensive houses in the west side neighborhoods lost their homes to the freeway. It was crazy once it opened since nobody knew how to drive on a freeway. People would get to the bottom of the entrance ramp, come to a dead stop, and wait for the traffic to clear before trying to enter. Fortunately, in the beginning, the traffic was nothing like it is today.â

Some of us to this day may grumble over speed cameras and the occasional driver who creates a bottleneck between Keo and the Third and Sixth Street exits, but MacVicar Freeway has benefitted all of us procrastinators who just canât give ourselves a little extra time in the morning. ♦