A pocket full of quarters 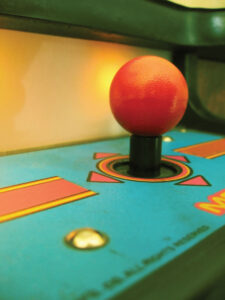 Millennials can be split into two groups: those of us born in the 1980s and those born in the 1990s. The 1980s-born kids still had a chance to enjoy life before the Internet, which included climbing trees, renting videos from a store, and trying to steal our old manâs Playboy. Then there are the 1990s kids. They were the ones who drove us nuts because they never had to work a day in their lives. They never knew the stress we had going to school while they stayed home or attended daycare with the other school-free brats. By the time they got into school, their computer labs had color screens (versus the green command line of our day). They will never know the struggle of playing âOregon Trailâ the way we did.

One thing that we all had in common is that we were the last generation to fully enjoy the original arcade experience. These were arcades that didnât sell food or have a bar where folks would get tanked on Fireball before they played a messy game of giant Jenga. When I was living in the Quad Cities, there was a place called Aladdinâs Castle at South Park Mall, a small chain of shopping mall arcades. It had a dim-lit storefront with neon colors that illuminated a path to the different game areas. This was the first arcade I went to that had a token machine, which meant that quarters wouldnât work.

Iowa has a rich history in the video game world based around Ottumwaâs Twin Galaxies arcade that was started by Walter Day in 1982. It became the national scoreboard for the video game world. Games like Pac-Man, Space Invaders and Donkey Kong ruled. But we are going to jump ahead 10 years to the era of when Street Fighter, Teenage Mutant Ninja Turtles and X-Men had lines of people waiting. That was true until a wild fighting game that featured blood and decapitations called Mortal Kombat showed up. I remember it always being loud inside. The games were loud, the people playing the games were loud, and this was where techno music escaped the rave scene and into the mainstream.

Samuel Pace-Tuomi, our correspondent for Generation X and owner of Archive Iowa in Urbandale, remembers his day of gaming in Des Moines.

âI would often go to the ones in the malls when I was growing up,â he says. âThere was one across from the Forum 4 theaters by Merle Hay Mall. It was right next to Felix and Oscarâs, and it was called Nickelodeon, I believe.â

The Fun Factory inside Valley West Mall across from the Valley 3 was another favorite spot for Pace-Tumoi.

âFor a short time, there was an Aladdinâs Castle in Merle Hay Mall by Montgomery Ward with two huge floors of games,â he says. âBut it did not last long, and it seems they shut down the basement floor after only a year or so of operations.â

Pace-Tumoiâs favorite arcade memory was Showbiz Pizza back in the early 1980s.

âIt was packed wall-to-wall with games,â he says.

On the other side of town, Xander Holland had his day behind the joystick.

âI remember this one giant arcade that used to be on Grand Avenue in West Des Moines (a Fareway grocery store now). It kept changing ownership over the years, but it stayed relatively the same.â

Holland lived close to it growing up and went there often.

âIt was the first place I played laser tag, and where I played House of the Dead. I remember when someone would get to the last boss in the game and all the kids would crowd around to watch. Lots of weird fighting games Iâve never seen again any other place, like there was one where you piloted a robot using two joysticks at the same time.â

Home gaming slowly killed arcades, but they arenât all gone. A few years ago, I visited a secret storefront in Burlington. There is a guy there who had a retail space that is not open to the public, but if you are in the know, you can give him a call and he will open it up for you to play any of the hundreds of arcade games he has stashed away. As he once told me, âIf it takes quarter, I have it.â ♦