The Doorsâ first, and only, show in Des Moines 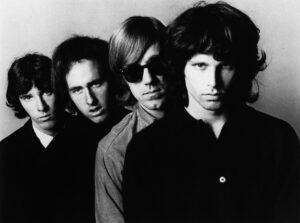 Do you remember when The Doors played Des Moines?

Well, they did, and it went down in history as the worst show in their entire history of performing. Ouch!

Bob Modersohn should be credited as co-author of this piece, as he brought this to our attention. Modersohn was a photographer for The Des Moines Register and later went on as a staff reporter for 33 years. He investigated this one-time show The Doors had, even though he didnât attend himself.

âThe Doors have been my group since 1967. I missed the Des Moines concert, as did many,â Modersohn said. âFor decades Iâd wondered why the KRNT concert was so poorly attended. On and off, I tried to reach folks who attended the concert or knew something about it. No luck. I even spoke with Ron Sorenson at KFMG, who was doing a popular progressive rock radio show when I was in college, but he knew nothing about the concert.â

July of 1967 was when the song âLight My Fireâ first hit the airwaves. It was the bandâs first No. 1 Billboard hit. Two months later, The Doors played to 566 people in the 4,200-seat KRNT Theater. Sept. 27, 1967, was the date, and The Doors had just played âThe Ed Sullivan Showâ 10 days earlier. In âThe Book of Rock Lists,â The Doorsâ organist described this one-time Des Moines show as their worst. 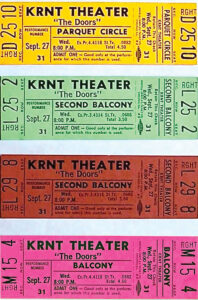 One possibility is that the event was poorly promoted. Maybe rock lovers just didnât know about it. The closest a Doors concert had gotten to Des Moines in 1967 was two weeks earlier in Canton, Illinois, a town of about 14,000 folks southwest of Peoria. The Canton High School auditorium crowd was âshocked, thrilled or frightenedâ at Jim Morrisonâs stage antics, according to local newspaper reviewer Conni Cook. The next night, they played in Warrensville Heights, outside Cleveland, to a small but enthusiastic crowd of 700. A few days after playing Des Moines, the group played two dates in Denver.

âThe crowd size was definitely a downer for them (The Doors),â remembers Fred Lorence, then 17, who played bass with Quarry, one of two local opening acts. Lorence says he got to know lead singer Jim Morrison during the evening. A lasting visual memory of his is Morrison spending much of the show gazing into a yellow spotlight, stage right. Reactions seemed to be mixed by those in the crowd whose recall of the event is still clear some 50 years later. Some loved the spectacle.

A few found the show lackluster or even irritating. I remember seeing one of my favorite acts, Type O Negative, back in 2006 at the Ogden Theater. Front man Peter Steele was leaning against one of the amplifiers while he played and just let the crowd sing along. I waited years to see them perform, and it was a complete let down. Steele (like Jim Morrison) would die just a few years later after such a terrible performance. Much like many other people, I never got a chance for a re-do.

Tom Lester, a local Des Moines music/record dealer remembers, âIt was put together fast to fill a spot on their calendar.â Posters werenât even printed, he said. Later, when KRNT Theater was closing for good, Lester got hold of the original Doors concert box office statement and still has a set of eight unused tickets, different colors according to different sections of the theater.

And thatâs that. A missed opportunity for Des Moines and the Midwest. When Modersohn and I talked on the phone, he brought to my attention that, even though âLight My Fireâ was released that summer, music like that still had to travel inward from the coast. There was always the joke that Des Moines has been 10 years behind (like in that famous âSouth Parkâ episode when they defrost the âcavemanâ from 1995). Obviously, the Internet has sped things up a bit, but I donât think new cultural influences get pushed into our senses as hard here in Iowa as they do where they originate.

So did Bob Modersohn ever see The Doors?

âI didnât see The Doors live until the summer of 1969 in Minneapolis. Leaving the concert, one of the young guys who drove us to the concert got lost, and I suggested pulling into the MSP airport departures exit to get turned around. There in front of the airport entrance was a white limo, and The Doors poured out. I was 19 or 20 years old. I jumped out of our car and locked onto Morrison as he walked through the lobby. I approached him while an older guy was asking him to sign a matchbook, which he did without speaking. I thought, what can I ask that wonât sound stupid? So I said, âItâs been a while since youâve released a new album, anything coming up?â âYeah,â he said, âThe Soft Parade. Itâs a good one. Itâll be out July 1.â â ♦