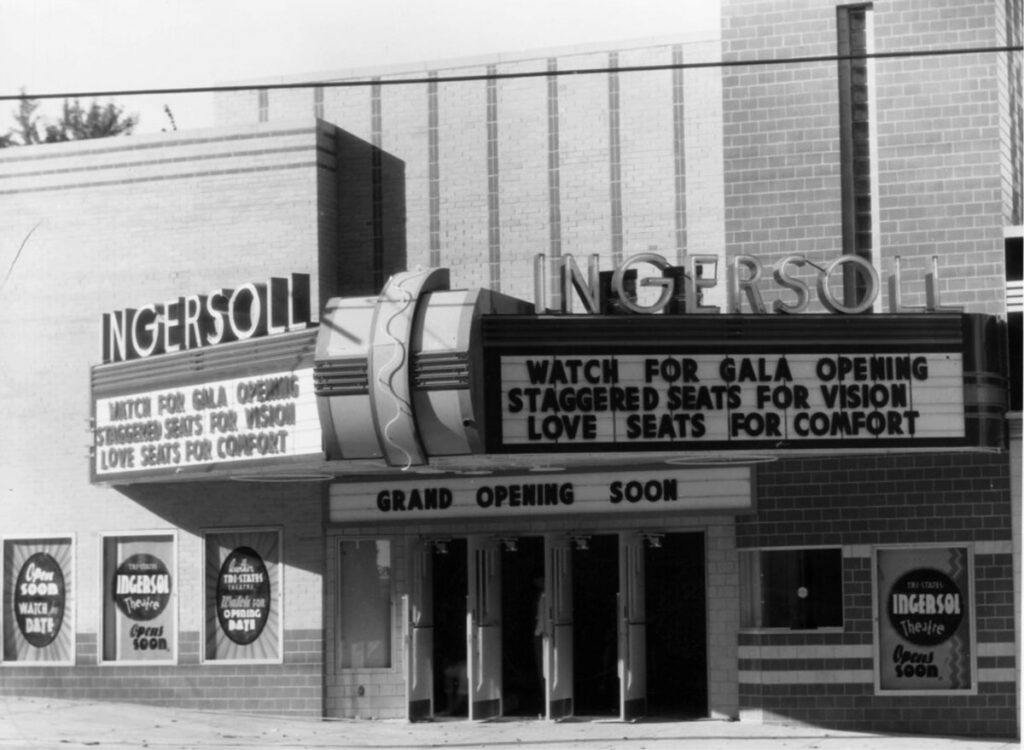 Exterior view of the Ingersoll Theater, with the marquee announcing its grand opening in 1939. The Theater eventually became the Ingersoll Dinner Theater in the late 1970s. Photo provided by STATE HISTORICAL SOCIETY OF IOWA, DES MOINES. Part of the Theatre and Operahouse Collection.

The holiday season is in full effect, and those close to me know that this is the time when I typically fall into my normal Scrooge behavior. Why? Well, it starts with Thanksgiving, then numerous November and December birthdays, then Christmas, then New Yearâs. Before I know it, every weekend is booked with nonsense, and my ears burn from four weeks of holiday tunes on the radio. You would think that there would be enough holiday songs that each one could get one or maybe two plays a season. Meanwhile, âIs That You Santa Clause?â by Louis Armstrong plays four to six times a day.

On a positive note, one thing that does come to mind is an old skit from âSaturday Night Live,â hosted by Steve Martin, in 1986 called âA Christmas Wish.â He sat down in a big comfy chair and went on and on about how all the children of the world should join hands in perfect harmony. Gradually, this list expanded, and then it all went straight to the gutter.

Well, I have one wish this holiday season, and that is for someone to come rescue the Ingersoll Theater. This place is an icon for Ingersoll Avenue, the street I have called home for the last 10 years. Itâs attached to two Des Moines institutions: Greenwood Lounge (whose shudders havenât changed since the 1960s) and Hagarâs Manhattan Deli. The place has had a lot of lives over the years, and although I would love to talk about its day as a neighborhood movie theater, I think most people who are still alive would recognize it as the Ingersoll Dinner Theater.

When the Ingersoll movie theater became available to rent, and rumors were floating that it was going to be turned into an adult movie house (I mean, Ottumwa had one), East High School music director Charles Carnes stepped in and moved his theater company, the Purple
Cow Players, there. Prior, they were presenting shows in a barn at the Cuttyâs Campground in the northwest part of the metro in 1976. Carnes and East High counselor Toni Johansen pulled their core company from the student body and added other folks along the way. Their
operation started with the performers doubling as servers. Once they arrived at the theater, they began by waiting on the customers, then performing, serving drinks and desserts at intermission, then completing the show. And, finally, making one more round to the customersâ tables.

Iowa stage veteran and CITYVIEW Center Stage columnist John Busbee has these memories: âI worked on staff at the Ingersoll for several years in the late 1980s. I also performed in many shows there including âFiddler on the Roofâ twice â first as Motel, then as Tevye. My wife, Kimberly, performed in the first show as Tzeitel, my betrothed. In the second production, our daughter Kaitlyn performed as Tevyeâs youngest daughter. I also performed in â1776â twice, first as John Dickinson, then as John Adams. And then âA Funny Thing Happened on
the Way to the Forumâ as Pseudolus and âOklahoma!â as Jud.â

A strange but fun situation occurred when the Ingersoll Dinner Theater produced the stage performance of âGreaseâ at the same time the national tour arrived in Des Moines at the Civic Center. The Des Moines Register reviewed both shows, and from what Busbee remembers, they gave the talent nod to the local troupe. Much of their business came from bus tours and local banks that would bring their senior clubs in on Wednesdays for matinees.

But this was a niche market, and the audience was only aging. The Ingersoll Dinner Theater closed down in 2004. Twenty-eight years of performances is a solid history to leave.

Former player Preshia Paulding informed me that she was with Charles Carnes when he passed away on Oct. 5 of this year. Now the Ingersoll Theater has slowly decayed into a sad memory of what it once was.

Would dinner theaters have survived COVID-19? Probably not. I remember going to one when I lived in the Quad Cities, and I was definitely at the age when I didnât appreciate it. Maybe there is a reality after winter breaks into spring when we can set up cafÃ©-style seating outside and a stage could be set up in the middle of Ingersoll Avenue and people can enjoy a meal and watch a show. If someone does this, please make sure to reference this December 2020 edition of CITYVIEW along with your best friend Kristian Day.

A special thank you to John Busbee and Preshia Paulding for sharing their memories with me. Want to send me story ideas on other people, places or events of Des Moinesâ past? Drop me an email at kristianday@gmail.com or on Twitter @kristianmday. ♦