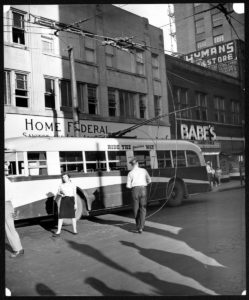 Babeâs was located downtown at Sixth and Grand Avenue in Des Moines. This photo was taken in August 1947. Photo courtesy of the State Historical Society of Iowa, Des Moines

November is the annual food issue here at CITYVIEW. For the size of Des Moines, we have a lot going on when it comes to restaurants and food â maybe even too much for our own population to really sustain. However, to better understand where we are today, we need to look to the Italian heritage this city has such deep roots with.

Alphonse âBabeâ Bisignano opened his infamous establishment âBabeâs Taproomâ in the early 1940s after returning to Iowa from New York where he was trying to become a professional wrestler. It was located at 417 Sixth Ave., where Sixth Avenue and Grand Avenue meet. Babe started by selling booze illegally in coffee cups, and his business soared. âThe biggest challenge was keeping the bar stocked. Babe smuggled in liquor from Minneapolis in trucks, hearses and any other conveyance he could think of,â The Des Moines Register published in 1989. It was a swanky place and became a hot spot for many of the service men who were stationed at Fort Des Moines during World War II. The Womenâs Army Corp (WAC) made Babeâs its unofficial headquarters. This drove more of our boys into the bar as well. The place would be elbow to elbow. Rumor has it, Babe had to call the police one evening when a pack of service men got way too rowdy. Years later, Babe would offer discounts to anyone who wore their service uniform in his place.

Jeanie Sheldon (then known as Jeanie Snyder) has these early memories of Babeâs: âWhen I moved to Des Moines in 1961 and went to work for Jim McGrane, I got to know Babe personally. Jim and Babe had gone to Dowling High School together and were both Golden Gloves boxers at some point after being in the military. They both had the flattened nose to prove it. Mr. McGrane took me to lunch there oftenâ¦they had the best buffet with fresh carved prime rib for sandwiches, among other delicious stuff. The staff was wonderful, but you could tell when Babe was inside the building because everyone really snapped up the service. It was during one of those lunches that Babe taught me how to wind spaghetti up on my fork instead of cutting it and how to make iced coffeeâ¦glass holding a teaspoon full of ice, pouring the hot coffee over.â

Drake Law students and legal secretaries also found Babeâs to be the place to hang out. Babe would always address the students as âCounselorâ and would allow them to occupy one of his booths for hours, with just a coffee. The servers never pressured them to buy anything else but just kept their cups full for as long as they would be sitting.

During the 1980s, Babeâs aged along with its customers. Those young folks in uniforms became parents and grandparents. So, as time passed, Babeâs morphed from a 1940s bar scene into a 1970s and 1980s Italian family restaurant with amazing pizza. It still carried that ârat packâ style, but the hair of the patrons was now a different color.

Babeâs celebrated its 50th anniversary in 1989. Like any other self-respecting Italian club of its age, the restaurantâs history was on the walls in old photos. In 1991, Babeâs finally closed its doors. The Sixth Avenue location sat empty for almost 10 years. In the early 2000s, there was some interest in re-opening the place, but it just didnât happen. The property was purchased in 2004 and talk was in the air of what might happen to it. Babe passed away in 2005, and the building was demolished that same year.

Most all of us wish for the âgood old daysâ of whatever era we claim it to be. I canât help but wonder now what Babeâs would have been like in the age of COVID-19? A place that fed off a packed bar, crowded booths, and a family atmosphere from knowing seemingly everyone in the room. Times have certainly changed. Imagine what would happen today to a restauranteur who sold illegal booze. Meanwhile, Babeâs restaurant, and Babe himself, are integral pieces of Des Moinesâ food history. ♦