Soâs Your Mother and The Laughing Iguana 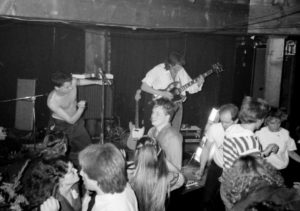 A Testament Of Youthâs final performance at Soâs Your Mother on April 27, 1993. Photo by Mark Heggen

Most of my faithful readers are aware of my weekly music program on 98.9 FM KFMG called âIowa Basement Tapesâ â a show that plays Iowaâs history in DIY music dating back to the rockabilly and psychedelic acts of the 1960s, the political punk rock of the 1980s and 1990s, and all the way to the current indie acts whose band members canât seem to get a good nightâs sleep. The attitude and ambition have carried on for nearly six generations or more.

Most cities of any size have a venue or two where this music was cultivated. Today, we would likely say places in Des Moines like the Vaudeville Mews, Leftyâs, or the Gaslamp â small venues that also operate as bars. Large cities usually have three types of venues: small, (Vaudeville Mews), medium (Woolyâs) and large (Wells Fargo Arena). Of course, there are also the really small pop-up venues like house/basement shows and the local community center shows. (Get on YouTube and look up Cannibal Horse â Helloween Live at the Hiawatha Community Center. This is what I had to work with back in the early 2000s.)

The second floor of 2000 Forest Ave. was once the home to two infamous music venues in Des Moines. The first was called Soâs Your Mother. The bar opened its doors in the 1970s and was more of a hippie place but eventually transitioned to a punk bar in the 1980s. It was part of the old nightlife in Drakeâs Dogtown neighborhood around Forest Avenue and Harding Road (which is now MLK).

Mark Heggen of Des Moines remembers the last show for the band A Testament of Youth on April 27, 1983: âThe final gig of ATOY was somewhat infamous for the lead singer doffing his clothes as the set went on, until he was down to a jock strap. One of the Motherâs staff had had enough of him at that point and demanded âPut your goddamned clothes back on,â but it was too late by then, and the farewell set ended with the singer still in the near-altogether.â

Throughout the 1980s, the venue played out as the center for a lot of great music both local and touring: HÃ¼sker DÃ¼, The Vers, Roze (Des Moines hair metal, check it out), and more. HÃ¼sker DÃ¼ is the only national act I mentioned, and that is deliberate. It also was the center of a tragedy that has never been laid to rest, as it was where Diane Schofield was last seen in 1975. The case is still open today. 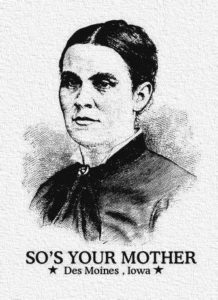 The original sign for Soâs Your Mother that was hung on the corner at 2000 Forest Ave.

Soâs Your Mother transitioned in 1989 into the Laughing Iguana, which was opened by local scene legend Jeff Wright (who went on to open Hairy Marys with John Limke). The venue was the center of a lot of great music with bands like Moveable Feast, House of Large Sizes, and even Smashing Pumpkins, which played the 300-person capacity venue in January of its opening year. Doug Hansen remembers playing shows there with his band Moveable Feast: âDennis (Gunn) would always bring along his cassette recorder and sweet talk the sound man to get a board mix off all the bands weâd play with.â

The Laughing Iguana closed its doors, and the building was eventually demolished around 2000. Where does that leave us? We have venues, and we need to support them, or they too might disappear. We are fortunate to have a city with these venues throughout the years, even as we grow out of our rebel years and assimilate into the working-class world that we swore we would not do.

A final note: To those interested in some of the cassette recordings from the band Moveable Feast playing at the Laughing Iguana, I have made them available for free at the IowaBasementTapes.bandcamp.com archive along with other interesting specimens. There is even a recording from a punk band called Welfare Skate playing a show at the Wilkie House (located in Sherman Hill) from 1986. ♦