P.T. Barnum would have been impressed by the showmanship. 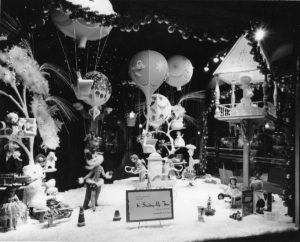 The holidays have arrived whether I want them to or not. We have worked all year for this moment when we spend our hard-earned money on the people we care about the most â and those who we canât get away with skipping over as it would make things awkward with the rest of our family. Yes, I could just pick something out on Amazon and, after a couple clicks, a few shopping cart changes (apparently buying a 30-year-old a book about his first job interview is not appropriate), I can complete my holiday shopping in 10 minutes or less. Yet, I do it kicking and screaming. Amazon was put on Earth for people like me whose eyes turn white just at the thought of the public shopping experience. However, my Grinch heart hasnât always been so cold.

Just a few years ago, I remember taking a walk through the East Village Promenade. Angels could be seen dancing in the windows above Lucca. Eden on East Sixth was packed shoulder to shoulder, and Jon Hansen was slinging cocktails in the back of the store. Vanity and Glamour was still open on East Fifth, and you could stop in for Patrick Boltinghouseâs own mixture of absinthe and cinnamon apple cider. You might also happen upon more than one âextra jollyâ Santa walking around taking photos. It was an amazing experience but only for one night. There was a time when nights like that would carry through the holiday season. Downtown was a destination for everyone. Before Amazon, before the malls, we had the era of giant department stores like JCPenney, Montgomery Ward and Younkers. It was back when shoppers would embrace the cold weather, tight parking and the chance that the items on the wish list might be sold out. First come first serve, how we all quickly forgot. This was what the holiday shopping experience once was.

But even as we all prepared to venture into the warzone that was the holiday shopping experience, there was something for everyone to enjoy: the holiday window displays. This was something to look forward to because it was an art. It took the eyes of creative individuals to come up with the designs and then a team to execute them. Mannequins dressed in beautiful garments, posed inside of winter wonderlands or in their Sunday best ready for church. The obvious intention was to sell product. However, there were a few that I am unsure of what they were selling, other than the magic feeling of the holidays. The displays had a shine to them that made shoppers forget that they were high-quality advertisements.

While sifting through the photo archives of the Iowa Historical Museum, I found a display that was absolutely breathtaking: small figurines posed in a winter wonderland that is not too different from something out of a Dr. Seuss storybook. At first, I wasnât 100 percent sure what was being sold until I looked in the corner of the photo and saw the boxed Candy Land game. Honestly, all the figurines and decorations could have been for sale, but I love the idea that his immaculate display was assembled to sell this one game under a tree. P.T. Barnum would have been impressed by the showmanship.

Tony Zika of Des Moines remembers the last few months of Younkers before Saks sold all of their retail stores to Bon-Ton in 2006: âWhat made Younkers special is that we had the freedom to be creative with our displays. Each store had the opportunity to be unique. Once the last merger happened, everything changed and became uniform. Instead of creative meetings, we would just get a planogram on how the display should look.â

We all know how this story ended. We were teased a few years back about the reopening of the Younkers Tea Room, but then disaster struck when the building went up in flames.

The holiday tradition continues with the annual East Village Promenade and similar events in other areas. With all the gentrification happening downtown, we may once again see the craft of holiday window dressing return, even if big retail doesnât. To be honest, it doesnât need to. All we need is something to enrich our quality of life, something that makes us stop on the sidewalk and look around at the city we live in and appreciate what we have. ♦