It was my soul food. 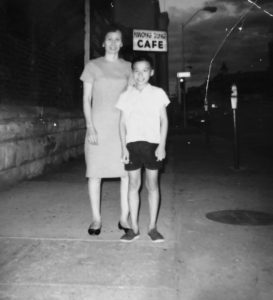 Hing and his mother, Moon Wong

I am a Chinese food junky, especially old-fashion sit-down places. When I was growing up in the Quad Cities, my dad would take me to a place in Milan, Illinois, called Shanghai. Shanghai was an old-school, sit-down Chinese place. It was also affordable, so it didnât break the family bank to feed three or four of us. Customers also felt a bit fancy with all the decor and Chinese folk music playing. Itâs the place where I learned how to use chopsticks at age 4. I still replace my normal silverware utensils with them at every meal if they are readily available.

After I moved out of the Quad Cities, I would continue to search for a place like Shanghai. Although my long search led me to try many other Asian delicacies (I have grown to love Korean BBQ), everything seemed to fall short of that childhood memory. It wasnât until 2009 when I moved from Des Moinesâ south side to the Ingersoll Neighborhood when I discovered Kwong Tung, a place where I could order a full entree meal with an appetizer and soup for $4.99. My mind was blown, and I became an immediate regular. I was there at least once a week and would take my family for lunch or dinner there when they were in town. I even got in the habit of taking some of my old actor friends there if they were in town on a project. One nicknamed the place âTriad House,â as he swore it had to be a front for the Chinese mob with prices so low. But that wasnât the case at all.

Kwong Tung was a family-owned-and-operated business since 1964. Don and Moon Wong opened the first Kwong Tung out of the Creighton Motel. The Wongs moved to Des Moines in 1956 from China. (They spent some time in Peoria, Illinois, as well as Cedar Falls/Cedar Rapids prior to settling in Des Moines.) They came over with their oldest son, Wayne, who was the only English-speaking person in the family for quite a while.

At the time, the Des Moines area had only two other Chinese restaurants: Rice Bowl in Beaverdale and King-Ying Low on Fourth Street (where Fongâs Pizza is now). In 1966, the restaurant moved to Eighth and Mulberry where it operated out of the Dial Finance Building downtown until 1975. Hing Wong, the second oldest child and first son of Don and Moon to be born in the United States, started working at age 14, cooking lunches with his parents while his oldest brother, Wayne, waited tables.

âWe were always busy. People who worked downtown would fill the place daily. At the time, we didnât have much for food delivery services like we do now. If we ran out of meat, we would have to close down and run to Hy-Vee,â remembers Hing Wong.

Dial Finance closed the building in 1975. The Wongs spent a year and a half looking for a new location. They stored all their restaurant equipment in their garage on High Street. Eventually, in 1977, the Wongs purchased the building that used to house El Banditos at 2721 Ingersoll Ave. (the old bar/restaurant with a gaming room in the basement). Hing Wong had his first legal drink at El Banditos, and Wayne Wong noted that he had some âpretty good timesâ there, too. Back then, you could count on one hand how many restaurants were on Ingersoll. In 1978, Don and Moon Wong passed the business over to Wayne and his four brothers. He managed Kwong Tung until 2005 when Hing took over and introduced Sunday Dim Sum to their menu. However, Hing, like most of us, wanted to retire, too, and in December of 2015, Kwong Tung finally closed its doors.

âWe made it work because it was part of our family. We all grew up here. Both my kids and Wayneâs kids were always here in the basement playing or helping take food out to customers. We learned the value of money as a family. About 90 percent of the time, there were only two of us working in the kitchen. Itâs weird thinking about a 40-hour work week. We never had that. Sixty, 90, thatâs more like it.â

Today I have Kwong Tung framed menus in my kitchen and original tea pots that I use often in my cupboards. As Des Moinesâ cost of living increases, I notice how eating out costs me nearly the same here as it does in Los Angeles or New York. An average entree at places like Kwong Tung is around $10-$12 a plate. I look through the old menu, and that nostalgia kicks in.

Three years ago, a documentary appeared on Netflix called âThe Search for General Tsoâ (spoiler: General Tsoâs chicken is an American-made Chinese dish). The film focused on all these mom-and-pop-style Chinese places, and that got me blue thinking about saying goodbye to my favorite restaurant in Des Moines. It was my soul food. ♦