His leadership at the time continues to be impactful today. 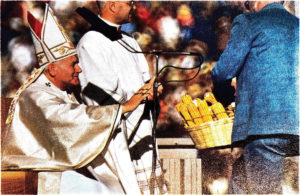 I often think about the different parts of my life and how social climates are different. I was born Sept. 11, 1985. The Midwest, as a whole, had a strong middle class, and a good union job could feed a family of four or five. Most everyone can look back at their youth and say they grew up in the simple life and that our present day is just too busy and complex. Itâs not that anything really was that simple; we have just detached ourselves from the stresses we felt back then. You are likely wondering what this has to do with an article about the Pope visiting Des Moines in the late 1970s, but stick with me.

Most who were alive at the time may remember that he led mass at Living History Farms, but he also visited Saint Patrickâs. It was reported that more than 340,000 people made the pilgrimage to Des Moines to see Pope John Paul II with their own eyes. Representatives from the four dioceses in Iowa knitted a giant quilt representing the four seasons of Iowa. Carol Short remembers taking her two young girls to the event.

âIt was cold, and we had to get up so early to try and get a place on the grassy hill,â she says. âWe covered ourselves with blankets, and we waited six hours. You didnât move because you would lose your spot. When we saw the helicopter, we saw the sun, and we were no longer cold.â

I can only associate this feeling with the overwhelming sensation of hope that surges through our bodies when we see light at the edge of darkness. 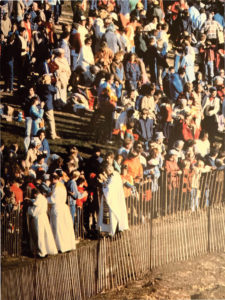 Looking at photos from the Living History Farms event, it is difficult to decipher if this was a Catholic mass or Woodstock. But what interests me the most is that not all 340,000 people who attended could possibly be Catholic. (It is also fascinating to see a group of that many people without a single person holding a cell phone.)

Pope John Paul II was a world leader who delivered inspiration regardless of what those who knew of him believed. He saw through political and religious differences. When we strip ourselves down to the bone, everything becomes simpler. The Catholic church was just a vehicle for him to unite the world. Looking at the photo of hundreds of thousands of people sitting on a grassy hill waiting to listen to one man doesnât tell me that we are more religious, or that Catholicism has huge numbers. It tells me that this one man, with all his heart, wanted good for this world, and he had the power to bring the world together.

We are in a time now when our world leaders are front and center, but we have become so divided and have chosen sides against one another. I often find myself taking sides and letting my own anger get the best of me. The stresses, both social and economic, have created a heavy burden in this world. Blame the social media soapbox, our lack of patience, or the leaders who use scare tactics to bully us into believing one thing or another. Do we have that leader today who we would wait six hours in the cold for? Do we have that person who simplifies all the problems that seem complex, stress us out, or make us frustrated and scared â regardless of faith, race or politics?

Pope John Paul II seems to have been one of those leaders, and we could use that type of leadership again today. ♦