A mysterious orange ring around the tub, overpriced beer and the rules of couch surfing 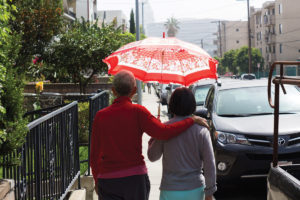 Faithful readers, this is my final Couch Surfing column for CITYVIEW. It has been a great experience sharing my experiences for the past two years, and I have had some amazing guests who have become lifelong friends. But I am done having couch surfers in my home for a while. The last message I leave you is that even though we always talk about needing support in our journeys in life, there are other people who are on their own journeys who need support, too. We have so much to learn from each other, and we shouldnât sit comfortably in our safe bubble. Your world will become so much bigger. Meanwhile, I will continue writing for CITYVIEW until they tell me that I canât. Look for a new column from me next month.

My final Couch Surfing piece is about my first night in Los Angeles back in September of 2015. So, in retrospect, I thought I would share how this all began. The following chronicles night No. 1 of a 30-day couch surfing adventure with strangers.

I landed in L.A. at 12:45 p.m. and picked up my rental car from a garage 3 miles away from LAX. Much like the entire trip, the rental car ordeal was super-sketchy. The company was called Turo, which is like Air BNB except with cars. My rental was a small sedan that smelled like cheap perfume from Walmart. From here, I was heading to an apartment that was close to the UCLA campus. The description read that it was five guys living in a two-bedroom apartment. Two guys per bedroom. They had three couches, but I only had a choice of two to sleep on, as one of them was already taken by one of the full-time tenants. My host, Apoorva, was from India and was working on his masterâs degree in accounting. (He seemed safe to me.) The place was about what you would expect from five guys living in a single apartment together: lawn furniture in the living room, open bottles of Barefoot wine on the kitchen table, and a bathroom with a mysterious orange ring around the tub. There is a rule I have that âif the bathroom isnât girl friendly, itâs not Kristian friendly.â You can guess where this bathroom fell on the scale.

After I settled in and visited with Apoorva, he invited me to a âcouch surfersâ pool party on the rooftop of the Ace Hotel in downtown Los Angeles. I mean, why not? We drove downtown, and, as typical, there were no parking spots near the Ace. It was located in the theatre district, so the streets were filled with trash and every couple of cars had someone sleeping inside them. In Iowa, we gasp at such things, but this is a common occurrence in this area of L.A. We parked about a half-mile away where we could see the Ace sign glowing in the sky, but we were definitely parked on the war zone (non-gentrified) side of the neighborhood.

We took the elevator to the top floor, and there was a young hippie-looking couple sharing the ride up with us, so I knew we were heading to the right place. We reached the top, and the door opened. A reggae band was jamming as the moon hovered behind them. People were dancing and having a good time. The pool was on the other side of the roof, so we made our way through the crowd. I stopped at the bar to grab a beer for myself and my new pal Apoorva before we headed to our side of the party. If you have read my columns over the years, you should not be surprised that I ordered a Coors Lightâ¦ that was $10! I had already spent $20 for a beer for myself and Apoorva. Insane. I should have never offered to buy the drinks, but the Iowa nice in me couldnât resist.

I moved slowly into the pool area to find my friend, still grumbling over having spent so much money on beer. The pool was packed. There were people everywhere. The music on this side was more pop with a mix Lady Gaga and The Cure â a weird but functional combo. Apoorva introduced me to a young woman named Kate, who was the No. 1 couch surfing host in West Hollywood. Hundreds of people crashed with her every year, and she organized the events for the west side couch surfer hosts and their travelers. She knew that I was new at this, and she broke down the rules of hosting couch surfers:

1) Couch Surfing is not for hook-ups or dating.

2) Never ask for money from a traveler.

3) Always provide a safe environment for your travelers.

She also shared rules for travelers:

1) Your hosts are not your innkeepers. Donât expect them to take care of you outside of letting you stay with them.

2) Respect your hostâs home and his or her rules.

Those rules saved my life over the next 30 days. I never take my entire suitcase inside. I would pack just a few clothes that I needed and stuff them in my backpack. So, if things got weird, I could get out quickly.

After spending $40 on beer (two for me and two for Apoorva), I decided that it was time for us to go. Upon re-entering the war zone to find the car, I soon discovered that not only did I lock the keys in the car, but I also left the headlights on. We waited an hour for Triple A to arrive to unlock the car and jump-start it back to life. Day one down, 29 more to go.

And this was just the beginning of my couch surfing experiences. ♦