His wife thinks he is just on a food tour. He says she is half right. 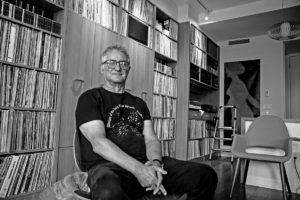 Out of the gate, I need to be up front that this monthâs couch surfer was not a complete stranger. The two of us were strangers, however, until we had mutual friends who dropped my name to him. Gary T. is an old Toronto guy who used to be a music promoter. If you are movie fans, you will also find him very interesting, as he was the guy who brought the first John Waters films to Canada. Gary was on his way to Austin to visit some friends. He asked me not to use his last name in the article. However, I can talk about his career. So if you want to try and turn my column into a fun guessing game, I highly encourage it. I need to also come out and say this interview is my favorite. If you are a music nerd or film buff, you will love this guy.

So before we get into why you are traveling through Iowa, I have to ask you about John Waters and Canada.

I would run âPink Flamingos,â âDesperate Livingâ or âMultiple Maniacsâ as a midnight movie. I would literally call John Waters at his home in Baltimore on Sunday mornings to let him know how much money I was sending him. He didnât have a distributor. He was making and distributing his films by himself. I used to run the Royal Theater in Toronto. I could do whatever I wanted, as long as I sold tickets. So I took a lot of risks and brought films from people like John Waters, Andy Warhol, Kenneth Anger and Jean Luc Godard. It was the 1970s, so there werenât many options to get those types of movies up in Canada. Canada was making a lot of movies with Cinepix and the tax shelters, but we were not getting to see a lot of movies.

What type of turnouts were you getting at screenings like these?

Tickets would sell for 25 cents Canadian, so it was cheap. It didnât really matter what was playing. As long as it had a good poster, people would come to the show. Sometimes people walked out, but that was fine because I didnât offer refunds. Not everyone would read the reviews, so I could run something like âPink Flamingosâ for a month before the word got around that it was so gross. Today, if something is terrible, people know about it before it even hits the theater. For real, itâs amazing how many bad reviews something could have, and no one from the public has seen it.

Aside from bringing films to Canada, you are also responsible for bringing musical acts like Dixie Chicks, The Cramps and David Bowie?

Some of those I just promoted, but, yes, many of them I introduced to Canadian audiences. After my era with movies, which I did continue to be involved with, I was working in radio at CKLN – FM in Toronto, and I managed The Horseshow Tavern (where David Bowie got his Canadian start). There were not that many radio stations at the time, and we were not fighting to capture the attention of people who just want to listen to Spotify. So we had a lot of influence on what you were hearing every day of the week. In the 1980s, I had a show that played Gospel music and was voted âbest black-music showâ by a local magazine.

So why are you in Iowa?

I am heading down to Austin to see some friends. I normally would fly, but while the weather was still good, I thought, âWhat the hell? Iâm 72, and I can drive through the states on my own.â My wife thinks Iâm nuts. I asked our mutual friend Blake where I should stay, and I wanted to only stay with interesting cats. He dropped your name and said you were in Des Moines where I had never been. So far, I have had coffee from Zanzibarâs and a beer from Exile. Iâm sold. Sign me up. From here I go down to see our friend Blake in Missouri and then head to Dallas. I am going to stop at a Waffle House. All my dreams are coming true on this trip.

I have been asking for a Waffle House ever since I realized we would probably never get one. We are not âSouthâ enough.

Well, this is all âSouthâ to me. I have eaten at one before in Texas. They are a guilty pleasure. When I get to Austin, itâs all about Torchyâs Tacos. My wife thinks Iâm just on a food tour. She is half right. ♦