Sports is in their blood 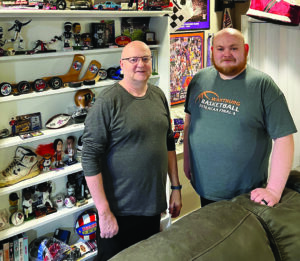 Gary and Tyler French each collect sports memorabilia, but the collection in Garyâs basement is the largest of the two.

The French Connection. Thatâs the name that Gary and Tyler French go by on their Facebook Live streaming channel called Pardon My French Media. PMF Media, as they sometimes call it, streams local sporting events, specifically for the Waukee Northwest Wolves and the Waukee Warriors. The father-son duo began their live streaming operation in 2020 when options became quite limited for Waukeeâs sport spectators. After connecting with Waukeeâs then activities director, Jim Duea, the Frenches began to offer another option for families who might not be able to make it to their kidsâ games.

The Frenches made the move to Des Moines from Arizona in 1997. They fell in love with Des Moines after a visit to the metro. They moved to Waukee two years ago. Gary and his wife live in a quaint townhome while his son, Tyler, and his wife live nearby. At first glance, the French townhome blends in with the rest of the neighborhood, but their basement stands out from the crowd. Their collection of sports memorabilia spans across each wall and fills the space with memories from the hundreds of games and sporting events the family has attended.

âI still have two bins of stuff that I canât put up. I donât have a big enough basement for them all,â Gary laughs. 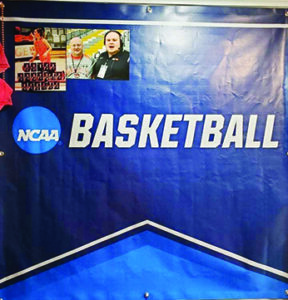 Tyler Frenchâs favorite item in his dadâs collection is a banner from the Sweet 16 games of the NCAA Womenâs March Madness tournament in 2016.

The collection includes items from a wide array of sports â everything from the NFL, MBA and MLB to drag racing and the 1984 Olympics in Los Angeles. Their love of sports goes back to when both of them were young. Gary recalls memories of  growing up on a farm with his dad, and, when the crops would come in, they would go and catch the Minnesota Twins series. He remembers sitting outside of the clubhouse after games in order to get autographs. Of course, Gary wanted to continue these traditions with his own son and instill the same love of sports that he has.

âThe sports adventures he and I have been on together, heâs been to hundreds of games in his life and has brought me along for a considerable amount as well,â Tyler explains.

Both Gary and Tyler have their own favorite pieces in the collection. Garyâs most prized possession is his framed poster from the then Phoenix Cardinalsâ first-ever home game at the Sun Devil Stadium. It was Monday Night Football on Sept. 12, 1988. The poster features an aerial photo of the stadium and the Goodyear blimp flying above. He recalls shaking hands with Cowboys Coach Tom Landry as he came out of the tunnel. 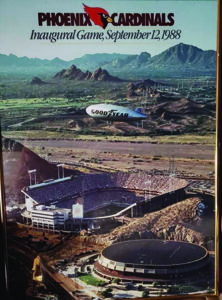 Gary French says his most prized piece of memorabilia is his framed poster from the then Phoenix Cardinalsâ first-ever home game at the Sun Devil Stadium.

Tylerâs favorite piece in his dadâs collection is the banner he received during his sophomore year at Wartburg. The banner was used at the Sweet 16 games during the NCAA Womenâs March Madness tournament in 2016. That year, the womenâs basketball team made it all the way to the Final Four, and he got to announce all five games the women played.

Not to be outdone by his dad, Tyler has his own, much less extensive, collection at his apartment. There, one of his favorite pieces is his autographed caricature of Gary Dolphin and Ed Podolak, the play-by-play and color commentary announcers for the Iowa Hawkeyes.

As passionate at they may be about their collections, Gary and Tyler French are equally as devoted to sharing their broadcasts with fans of the Waukee Northwest Wolves and the Waukee Warriors. For them, their Pardon My French Media is not about the money, but rather their love of sports.

âWe personally enjoy Pardon My French Media and what it does for the community and families out there,â says Gary. ♦