One manâs pigeons are another personâs pet peeve? 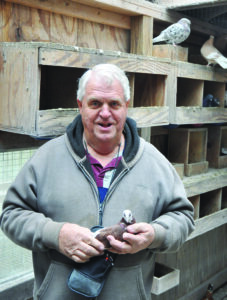 Larry White fears for his flock of 200-plus pigeons. The City of Des Moines has asked him to reduce his flock to 30 birds. White has applied for an exception.

Life is good for the 200-plus pigeons living in domestication within the detached structures behind Larry Whiteâs southside home. Food is plentiful for the pigeons â they eat mostly grains â and they live 15 years or so on average. At least they do as long as they arenât let out at the wrong time.

âIf you turn them out at the wrong time,â White cautions, âtheyâre hawk food.â

Whiteâs birds, known as Birmingham Roller Pigeons, are different from homing pigeons. Rollers have the ability, as their name implies, to roll while flying in mid air.

Some say this tendency to tumble is due to genetic factors that cause brief seizures, which send the birds into a backward somersault. Other experts reject that idea, reasoning that, if these are involuntary seizures, the pigeons would not be in control of how or when they roll. But the birds do seem to be in control, and they are even trained to perform in sync with their flock or kit.

Either way, at competitions, the rollers are judged as a team of 21 birds. Each kit circles in a tight formation as the birds take turns tumbling toward Earth and doing backward somersaults at a rate of eight to 12 revolutions per second.

White has won his share of competitions, and he breeds birds, too. Raising rollers has been a way of life for him for 50 years, but donât get the wrong idea. While selling some breeds of pigeons can be profitable â prize pigeons in China sell for seven figures â most of Whiteâs birds go for $10. So itâs not about the money.

âThis is what I do for mental health,â he says.

After a neighbor complained about one of his roosters crowing too loudly â he keeps chickens, too â the city inspector saw his pigeons and took action. White says there have been no complaints specifically about his pigeons, but he received a letter from the City of Des Moines insisting that he reduce his number of birds to 30 or less.

To realistically compete in the pigeon game, participants need to have dozens, if not hundreds, of birds, according to White. Most pigeon competitions require participants to enter two kits of 21 birds.

White insists his birds are ânot dirty birds,â pointing to experts who say there are no known communicable diseases between pigeons and people or pigeons and dogs. Something else heâd like the public to know is that pigeons make barely any noise, according to him, other than a barely audible cooing.

This all might sound like too much trouble for a bunch of pigeons, but White points to one longtime friend and gets slightly emotional.

âThatâs Curious George,â he says. âIâve had him for 21 years. I raised him. He is my buddy. I donât have a family. This is my passion.â ♦