Running out of room at the inn?

Merrilyn Mohanâs 150-plus nativity sets come in many shapes and sizes. 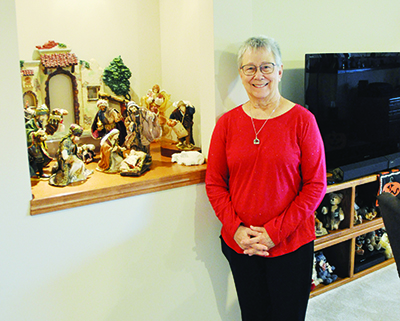 Merrilyn Mohan enjoys sharing the treasures within her home. The Ankeny basement is loaded with more than 150 nativity sets from around the globe. Lighting and other props accentuate the collection. The effect is said to be âartistic and beautiful.â

If itâs mid-November, then itâs time for Merrilyn Mohan to pack away the large teddy bear collection in her Ankeny basement and clear a spot for baby Jesus.

âThey may have run out of room in the inn in Bethlehem, but thereâs some space at Merrilynâs house.â Thatâs the consensus of Mohanâs friends.

In fact, Mohan not only has room for one baby Jesus, but she annually displays more than 150 of them.

âItâs a 60-hour project,â she estimates of set-up time for her holiday display of nativity sets. âThe tiny lights take a lot of time to position right to illuminate them well.â

A collection of angels accentuates the ambiance of her holiday arrangement, as does much of her cross-stitching.

âIâm a collector of many things,â she says. 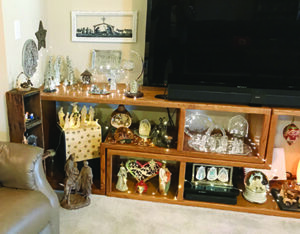 Collecting nativity sets began back in the 1980s for Mohan. Thatâs when a friend shared her passion for them, and that passion soon became contagious.

The nativity scenes come in many shapes and sizes.

Mohan wears one nativity scene around as a necklace. Another one she bought at the Vatican. The Waterford crystal version was brought home from Ireland by Mohan. There is one that is made of beeswax, one carved out of olive wood from the holy land, one on a glass plate and another cross stitched. (She is an avid cross stitcher.) One gets left up all year around, but that doesnât mean it is her best one.

âItâs something really special,â she says, but, âitâs really hard to choose a favorite.â

Mohan was widowed in 2012, and the dime-store nativity scene purchased by her husband as a kid also occupies a special place in her heart.

When she isnât collecting or cross stitching or decorating her home, Mohan attends Our Ladyâs Immaculate Heart Catholic Church in Ankeny. She also enjoys water exercise at Trail Point Aquatics & Wellness, playing cards, and enjoying day trips with friends. And donât forget her six grandkids who love Grandma and revel in her basement and its trappings.

The annual open house Mohan holds for friends and family is a big hit that draws rave reviews.

âIncredible,â people routinely say upon taking in the scene.

âThis is a passion of mine,â says Mohan. âItâs an awful lot of work, but it brings me so much joy.â

Is there a limit to how many newborn babes in a manger that Mohan can squeeze into her home?

âIâm running out of space,â she admits. âSo I need to be selective.â ♦