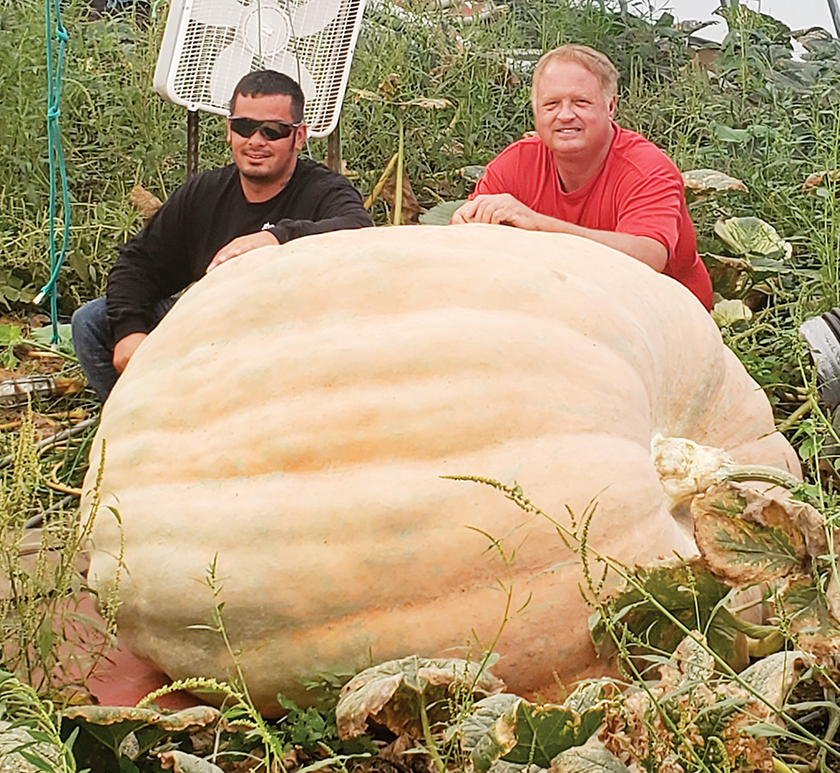 Don Young and his son-in-law Tommy Rhodes grow giant pumpkins in an impressive backyard setup that includes a 70-plus-foot greenhouse, a complex irrigation system and an elaborate climate-control setup involving more than a dozen fans attached to underground piping.

Jaws dropped at this yearâs Iowa State Fair when Don Young and his son- in-law, Tommy Rhodes, arrived at the Big Pumpkin Contest. Their entry needed a forklift to hoist it onto the scale, and the monstrosity topped out at 915 pounds.

This green-thumbed duo won first place and banked a $1,850 prize, but now itâs on to bigger and better pumpkins.

Iowaâs limited growing season isnât ideal for pumpkin growing, but that didnât stop Young from once setting the worldâs heaviest pumpkin record â he did so in 2009 and was featured on The Tonight Show with Conan OâBrien where a monster truck jumped a curb in order to land smack dab on top of it â and it hasnât stopped him from having two still-growing pumpkins that dwarf his own Fair-winning entry. Heâll soon harvest these monsters, too.

âWe brought the little ones to the Fair,â he says. The bigger ones will be officially weighed soon, but he doesnât expect to reclaim his world record, at least not this year.

âThe current world record is 2,624 pounds,â Young rattles off the number without having to think. âWeâd like to go 3,000.â

âWeâre learning a lot this first year,â he continues, pointing to a sprawling backyard setup. âNext year?â he shakes his head. âWatch out.â

This isnât Youngâs first rodeo. He has won 12 Iowa State Fair Big Pumpkin championships, and for two decades or so, he has grown, bred and innovated a line of world-renowned pumpkin seeds known as âAtlantic Giants.â These efforts have generated seeds that have gone on to produce championship pumpkins around the nation. But Youngâs pumpkin-growing operation kicked up significantly two years ago when Rhodes joined the operation. Since then, the duo has constructed a 70-plus-foot greenhouse that is exclusively dedicated to a handful of pumpkins per season. The monstrosity takes up most of Youngâs backyard, and it is equipped with a complex irrigation system that is attached to the gutters on the garage to funnel rainwater off the house and into rain barrels to be used at a later date.

Humidity is the enemy of pumpkins, yet they need moisture; the air temperature needs to be warm, yet it canât be too hot.

Since Iowa summers generally offer a lot of hot and humid days, Young and Rhodes have engineered a system of more than a dozen high-powered fans attached to 4- to 6-inch corrugated tubing that they buried 12 feet or more underground. The fans pull the underground air up through the tubing, circulating very dry air that is just about the perfect pumpkin-growing temperature.

Young and Rhodes picked up most of the costly equipment for either pennies on the dollar or else they engineered makeshift alternatives for a fraction of what it would cost others.

âItâs never ending,â Rhodes says, shaking his head and smiling while scanning the backyard scene. There are pallets upon pallets of peat moss and potting soil scattered about, as well as tubing and tent-like structures and water piping.

If you want to see this yearâs payoff, visit the 2500 block of East 24th Street in Des Moines, starting in mid October. Rhodes and Young will have the biggest of this yearâs giant pumpkins on display in Rhodesâ front yard for Halloween. But any would-be hooligans ought not entertain dreams of an epic pumpkin smash.