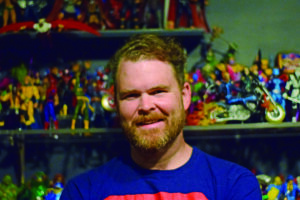 âWhen I was 8, I brought a Superman figure with me to Grandmaâs farm house in Eagle Grove. A calf jumped a fence and started running towards town. My dad and uncles managed to catch, calm and corral her, but I had decided to help.â

Bringing Superman along for moral support turned out to be a mistake.

âAt some point, I dropped him in a pasture,â Umthun continues. âWhen we sold the farmhouse a few years ago, I gave the pasture another once over. Maybe someday in the far future someone will find a little kidâs treasure, an icon of truth and justice, appropriately in a field in the heartland.â

That failure in Umthunâs youth has not been indicative of future behavior. He now excels at finding and accumulating action figures and comic books. 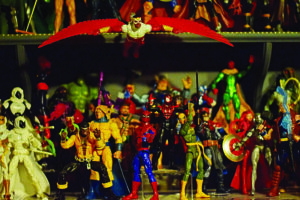 âI think the very first one must have been a Superpowers figure from DC back in the early 1980s,â he remembers, âthe Batmans and Supermans who would swing their arms when you squeezed their legs. In the 1990s, I collected X-Men. As an adult, Mattel produced DC Universe Classics, which was essentially a very advanced sculpt version of Superpowers line. That DC license is now with McFarlane toys, which are absolutely silly but very good figures of recent comic characters specific to DC.â

Some items can be valuable â a few hundred dollars to the right collector â but collectibles are only worth what someone will pay. Money probably shouldnât be your primary motive.

âItâs a matter of whether it brings you joy,â he explains. âItâs more the hunt for something hard to find at a good price. Iâm about to sell a lot of the mint-condition, in-box figures at probably half what they are notionally worth.â 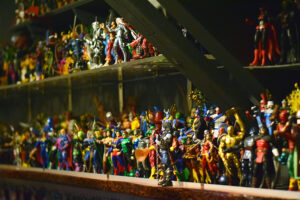 He simply needs to make room.

âThatâs going to bring some collectors out there some joy, I think,â he laughs.

Umthunâs collection is big enough that he doesnât know exactly how big it is. He estimates it to be shy of 1,500 individual pieces.

âI have nearly every figure in DC Universe Classics, save for the Legion of Superheroes and some of the mail order releases. … Iâve got all the McFarlane DC so far.â

If his house were burning down and he could only save one action figure, which would it be?

âThatâs rough,â he laments. âIn-box, it might be the Marvel Legends Archangel they released in around 2015. Loose, it might be my Mattel DC Barry Allen Flash. 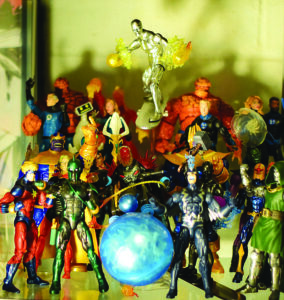 A comedian. A collector. A husband. A man born in Alabama but raised in Iowa. A storyteller. A pet owner â two cats and two dogs. Fiction writer. A webcaster. Umthun is also a man with something to say.

âAmerican history in the 20th century is strongly influenced and even a product of our popular culture,â he says. âIn that sphere, art has imitated life and life imitated art.â

Comics, jazz and stand-up comedy are uniquely American art forms, according to Umthun, and that art affects the world.

âA billionaire that looks like Lex Luthor (Jeff Bezos) just took a rocket to space with a crew dressed like the Fantastic Four,â he says. âThe U.S. may never have entered WWII without Captain America punching white supremacists.â 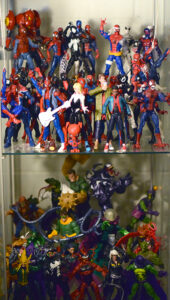 After a dozen-plus years of doing standup, Umthun is proud to have worked with many of his comedy heroes, either at the Funnybone or while hosting an open mic at Leftyâs â every Tuesday for about 11 years. If you want to hear more from Umthun, look up Doomcast on YouTube.

âI think of myself as a creator,â he says, ânot of content but of meaningful culture. … If Alton Brown did a comedy show about comics and pop culture, mine would still be better. Itâs more than a Wikipedia article on comic stories; itâs the news, history, context and secret origins. Itâs funny and, most importantly, accessible. You donât have to know comics or anything to enjoy it.â

Editorâs note: After a 6-year run doing the Beast Village Comedy Festival, Umthun has stepped aside. âI turned it over to fellow comic and creator/streamer Matt Jacobsen in 2019,â Umthun says. âDes ComÃ©die Festival is the name of the new incarnation. It debuts the first weekend in October of this year.â ♦