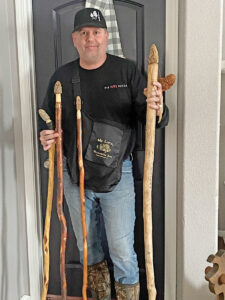 Jackpot. Mushroom hunting has been a passion for Steve Roberts since a young age, but in May of 2019, he and a friend hit the motherload. Combined, the duo bagged 47 pounds in one day. Thatâs a lot, according to Roberts, who has been prowling central Iowaâs countryside since he started walking. But this is the first time he has hit this big of a morel goldmine in decades, or maybe ever.

Last year wasnât a great one for mushroom hunting, according to Roberts. Itâs hard to pinpoint why, but the influx of outdoorsmen tromping through the woods, the likely result of people experiencing cabin fever derived from the COVID-19 pandemic, didnât help. Ditto for the increasing number of profiteers.

âIâve never sold a mushroom in my life,â he says â wild mushrooms can be quite valuable â $25-$40 per pound in some cases â and some mushroom hunters do cash in.

Roberts is optimistic that a bumper crop could be upcoming.

âAll this snow is going to help,â he says.

In Des Moines, the morel season usually starts in mid-April and runs until Motherâs Day â the second Sunday in May. But that is just a loose guideline. Mushroom growth, among other factors, is dependent on the weather, so the season is an unpredictable moving target.

Wild mushrooms thrive based on a wide variety of conditions. Moisture levels, moderate temperatures, mushroom spore quantities, and other factors all play a role. It needs to stay cool enough that the soil wonât dry out, yet warm enough that the mushroom spores donât freeze. Typically, that means upper 50s and lower 60s.

A successful hunt can happen in an hour or less if you know what you are doing and hurry, but Roberts prefers to take his time and spend 3-4 hours when he can. On a typical mushroom hunting day, he rises with the sun and seeks out favorite hotspots. He says the best predictor of future mushroom growth is past mushroom growth, so he keeps records as to where he has previously found the fungi. If he isnât having luck in those places, then he starts wandering elsewhere while scouting for fallen trees. Conventional wisdom holds that morels mostly sprout under dead elms, and Roberts says dead ash and oak trees can also be breeding grounds.

If you arenât having luck on the outskirts of the brush, itâs time to roll up your sleeves and rummage into the thicket.

And if you do find one, keep looking in that area.

Donât quit if you wind up empty handed for the day. It happens to the best mushroom hunters, including Roberts, who says he gets skunked frequently. Roberts can be happy just spending time outdoors, but make no mistake, eating mushrooms ranks high on his agenda, and he especially enjoys providing these mushroom delicacies to his family at holiday get-togethers.

As a youngster, Roberts looked to his dad and grandpa for advice. But now others look to him as the expert. Several years ago, a friend started a Facebook page â Iowa Morel Report â for wild mushroom hunters to easily share their experiences, photos and foraging exploits. The friend handed the page over to Roberts early on, and, since then, it has grown to nearly 34,000 followers. Roberts says he still has much to learn when it comes to scoring morels, just like everyone else, and that is one reason the Facebook page comes in handy. He gets to hear the experiences of thousands of others while posting his experiences and fielding questions. ♦