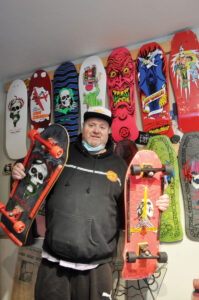 Matt Martone with his vintage skateboard, a Mike McGill Powell Peralta board from 1986.
Photo by Jeff Pitts

It was Christmas morning in 1986 or so. The unwrapping had ended, and there were no more presents under the tree.

Martone knew how hard his mom labored while working two jobs to make the ends meet. He was determined to be grateful.

âBut I really wanted a skateboard,â he admits. âAll my friends had one.â

Martoneâs board was lousy and of the lowest quality, making it nearly impossible to thrive despite his passion for the hobby.

âI had like a Nash (skateboard) from Walmart or something,â he remembers.

But that Christmas morning, as Martone attempted to hide his sinking heart…

âYou forgot one,â his mom smiled as she came through, just like she seemingly always did, with the perfect surprise, legendary skater Mike McGillâs signature board by Powell Peralta (1986). McGill is best known for inventing the âMcTwist,â an inverted backslide 540-degree aerial. You likely have no idea what that means, but suffice it to say, it is one of the most important tricks in skating history, and McGill first accomplished it in 1984, at a time when recreational skateboarding was exponentially growing in popularity, and young skaters aspired to be like Mike.

That board is long gone. Martone used it up in just the manner he should have. But when his mother passed away years later, Martone remembered her generosity and tracked down another one just like it on eBay.

…Then he found another that jostled up just the right memories.

âWhen I fall now, it hurts,â he grimaces.

So Martone doesnât skate much now, instead he owns hundreds of vintage skateboards because collecting is more fun than falling.

One board had bullets shot through it. Others are signed by famous skaters, including Tony Hawk, Frankie Hill and Mike McGill. Some are wrapped in the plastic and came straight from the production line without wheels having ever been attached.

A Google search shows that some boards sell for several hundred dollars or more. Others in Martoneâs collection have tripled in value since he acquired them.

âThese will be a part of my retirement,â Martone says.

Not everyone knows there is a collectorsâ market for skateboards, so it is possible, occasionally, to pick one up at garage sales for $5-$10. But you have to get lucky. Finding vintage boards in good condition is uncommon.

âWhen you skate them, you beat the heck out of them,â he explains. âBack in the day, there was a word called âposer.â If you bought a skateboard and you skated it a couple of times, and then you put it away in your room and you never skated again, but you still dressed like you did, we called them posers. We (skateboard collectors) dream about finding poser skateboards.â

Skateboard collecting offers the potential to make money, and profitability, of course, is better than the alternative. But cashing in isnât Martoneâs primary aim. He says the best thing about skateboarding and collecting is definitely the community.

â90 percent of skateboarders are really cool people,â he says.

If all goes according to plan, more of those cool people might soon arrive to visit the area. When the 88,000-square-foot Lauridsen Skatepark opens downtown in May â at the north end of the Principal Riverwalk next to the Des Moines River â the âOlympic-caliber parkâ will be one of the largest in the nation.

When the downtown skatepark opens, Martone will be there, no doubt, and heâll have a board or three with him. He knows firsthand the difference between riding a good board and a bum one, and he and some friends frequently build quality boards and give them to kids who are out with friends trying to learn but appear to need an upgrade.