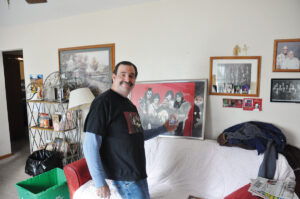 Blood spit straight out of the mouth of KISSâ Gene Simmons is on display at the south-side home of Franco Tangari. The same goes for an eye-popping array of ticket stubs, concert reviews, celebrity autographs and more than 40 yearsâ worth of concert-going memorabilia. The neatly organized collection contains many rare items, but Tangariâs memories are his most prized possessions.

âI have a lot of stories to tell,â he says.

Once upon a time, it was 1977, and the middle school student learned KISS was coming to Veterans Memorial Auditorium. He couldnât wait.

âMy mom and dad werenât really fond of KISS,â he laughs. âThey thought they were kind of like the demons from hell.â

Still, Tangari convinced them to allow him to go, and that first KISS show remains his favorite overall concert experience. But his single best concert-going moment came courtesy of Stevie Ray Vaughan.

âI never saw anybody play guitar like that,â he remembers. âI never got to see Jimmy (Hendrix), but I saw Stevie, and when he did âVoodoo Child,â that blew me away.â

Afterwards, Tangari walked up to the stage angling to snag a guitar pick dropped by Vaughan while he played âTin Pan Alley.â

âI asked the roadie if I could have it,â he remembers.

Not every concert keepsake has come that easy. The toughest ticket for Tangari to wrangle was for a Grateful Dead show at the Civic Center in 1981.

âThere were 500 people in front of me when I got to the Civic Center,â he remembers. When the box office sold out, they advised him to try across town at Music City. He eventually scored, barely, but the run-around was worth it.

âI didnât know how to dance to it (Grateful Dead music),â he admits. âI just stood there and enjoyed the show.â

He also managed to nab the discarded guitar pick of bassist Phil Lesh.

With so many keepsakes, you might be wondering, but the answer is no, Tangari does NOT have the head that Ozzy Osbourne bit off of a bat at Vets back in 1982, but he did witness the scene, and he says he knows the person who released the bat into the arena.

Another item Tangari does not have is Frank Zappaâs autograph.

âI asked, and he goes, âNo!â and Iâm like, âWhoa.â He does that with everybody; he kind of messes with you for a reaction. I was smart enough to say, âCan I have your initials?â And he kind of liked that. He said, âSure.â â

But Tangari does have a rare signing by John Lee Hooker.

âHe came out and I said, âJohn, you were great, can I have your autograph?â He says, âNo, leave me alone.â

But then he opened the limo door and got in and I got in, too. He finally signed, but it looks terrible. … I found out a couple of weeks later that he doesnât know how to write (legibly), because he was born on the streets of Chicago.â

But back to that container of KISS blood…

âThat cup there, I told the roadie in Moline, Illinois, 2003, âIf he (Gene Simmons) throws anything off stage, itâs mine, because youâre not letting me come up into these empty seats up here and I paid a thousand dollars.â He says, âDonât worry about it.â So during âGod of Thunder,â he (Simmons) spits into that little cup, and then he hands it to me.â

The blood isnât real, assures Tangari. Some say itâs made of egg yolks and sugar or something similar, but his memory is 100 percent authentic.

âIâm still a kid at heart,â he says.

COVID-19 has curbed Tangari from making many recent concert memories. His last live show was in February when he watched Korn in Cedar Rapids. But Elton John is on Tangariâs agenda in 2022 at Wells Fargo Arena. If enjoying concerts is on your agenda, too, Tangari has some advice.

âDonât go to a show drunk or stoned,â he says. âIt only takes away from the experience. I see people getting up several times to get beer, and by the time they get back, the show is over. Most bands only play two hours or less. Now that COVID hit, we have no shows at all, so keep your memories.â

From AC/DC to ZZ Top, Tangari is doing just that.

âMy memories will be with me until I die,â he says. ♦