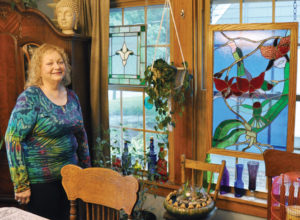 You can find Diane Bacon online along with her stained-glass creations by searching  GlassOptics stained glass creationsâ on Facebook. Otherwise, you can generally find her creating in her basement workshop. Photo by Jeff Pitts

Diane Bacon keeps a box of Band-Aids at the ready. The skilled stained-glass artisan has had her hands bloodied more times than she can count while pursuing her passion.

Once upon a time, Bacon was a small child who would sit in church and marvel at the beauty of the many stained-glass windows.

âItâs awesome on a bright, sunny day,â she says. âWhen the sun comes through the glass, itâs like this âahaâ moment.â

Many years later, Bacon enrolled in an adult education class to learn how those majestic windows were made and to see if she could do it herself.

âThat was it,â she remembers. âI was hooked.â

It has been three decades since she first learned her skill, and Bacon still canât get enough.

Creating these stained-glass treasures is time consuming, but she says anyone can learn as long as the participant has a little patience and a penchant toward exacting precision. Those are the keys.

Stained-glass decorations make great gifts, according to Bacon. She should know. When the walls and windows in her own home became devoid of available space, her friends and family became the lucky recipients of her labors. After that, word started to get out about her talents, and she began hearing from people willing to purchase these treasures. Soon, Bacon began attending art festivals and craft shows
with her wares, and she offers them online, too.

Bacon, 65, describes herself as an âold hippy,â but her wild concert-going days are long gone. She is retired but still has a unique enthusiasm for life. At least part of that can be credited to the joy she receives from making her many stained-glass picture frames,
sunflowers, religious crosses, birds, kittens, earrings, spiders in spider webs, hearts, butterflies, geometric shapes, the moon with stars and even an occasional dog, among other things. Bacon says an abundance of people have been asking for chicken-themed decorations recently. She is happy to oblige these requests, too.

Every inspiration means Bacon gets to spend more time tucked away in her Beaverdale basement workshop. When you feel like whistling when you work, the working ceases to be work. As such, Bacon labors nearly every day.

âI love it,â she explains. âI could spend all day down here.â

When Bacon isnât carving glass or concocting crafts, she is the proud owner of four cats, and she enjoys tending to her flowers. She also enjoys spending time with her husband, but when her beau feels called to spend an autumn afternoon watching football, it is not a problem. She has her own get-away.