Attack of the drones 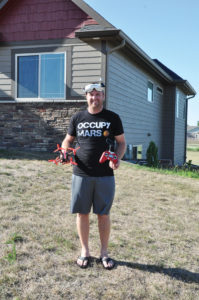 Drone racer Chase Johannsen navigates the controls of his radio-controlled aircraft, which is capable of
flying at speeds of up to 80 mph. The drone racer transmits a live camera feed to his goggles, giving him a
first-person vantage point in real time. Johannsen serves as vice president of 515FPV, a drone-racing club
that practices weekly on Wednesdays. You can find 515FPV on Facebook. Photo by Jeff Pitts

Chase Johannsen says decent racing aircraft can be bought for a couple of hundred bucks plus some of the other gadgetry needed to go along with it. Pretty much everyone competes with the same caliber of aircraft, so no one buys themselves blue ribbons via an unfair advantage.

A typical racing drone is equipped with a camera that transmits a first person view in real time through the pilotâs head-mounted goggles. This makes it possible for the pilots â with two feet firmly planted on dry Iowa soil â to enjoy a vantage point that is as if they were sitting in an actual cockpit while flying above Earthâs surface at 70-80 mph and navigating race-course obstacles controlling the aircraft via deft movements of their twin-joystick controller.

If you have a need for speed, drone racing is growing in popularity, and Johannsen serves as the vice president of 515FPV, a group dedicated to flying radio-controlled aircraft from the first-person view. Johannsen is FAA certified, but he says most of this kind of racing usually wouldnât require a license. The races generally happen relatively close to the ground and far away from airports.

Prior to COVID-19, 515FPV members regularly practiced at DMACCâs West Des Moines campus, but the crew now gathers north of the city at a rural private residence. Johannsen says the groupâs competitive nature might have discouraged some previous newcomers. As such, its
members have resolved to divert the bulk of their time and energy to helping others learn. They save their competitiveness for the competitions that they attend â generally one per month with between 10-30 contestants participating. (COVID-19 has held numbers down a bit lately.)

People who are thinking about becoming drone racers might also benefit from watching drone-racing videos online or from testing their
skills on a simulator.

In real-life action, through the goggles, the racer can see an assortment of metrics and digitized information, including flight time, aircraft speeds, altitudes, voltage, signal strength and other options, but Johannsen isnât looking at those. Instead, his eyes need to be straight
ahead and/or past where he wants to go, anticipating the next turn or obstacle or maneuver. Otherwise, itâs too late.

The fast-paced action demands your full attention, and contests donât last long. Driving the propellers for the planes to achieve such high speeds quickly wears out the batteries of most aircraft after a short time, thus races generally last roughly two minutes.

âPractice,â says Johannsen. That is what makes someone better at this sport. And he should know. His best moment behind the drone-racing controls came a few years ago when he beat local ace Christian Van Sloan â a talented local drone racer who has since gone on to qualify for the Drone Racing League (DRL), which is the nationâs highest level of drone racing. DRLâs pro racers frequently earn six figure
salaries.

When he isnât flying his miniature aircraft, Johannsen enjoys boating with his family and friends at Saylorville Lake, playing softball, volleyball and other outdoor activities. But when he straps on the headgear…

WHAT IS FPV DRONE RACING?

According to DRLâs website, drone racing is a new high-speed competitive racing sport. Skilled pilots fly quad-copter drones through three-dimensional courses at speeds up to 120 mph. DRL drones are custom built for speed, agility and performance. Pilots steer from the point of view of the drone by wearing First Person View (FPV) goggles that display a live image transmitted by an onboard camera. Flying a drone competitively at high speed in FPV is an intense, immersive experience.