Jon and Sharyl Engelhardt transformed their basement into a boxcar bonanza. 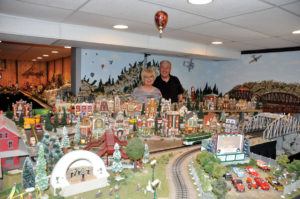 Together, Jon and Sharyl Engelhardt have built an eye-popping model train set.

What started as one coupleâs vision of a toy train set looping their Christmas tree â they figured it would impress their grandkids â has grown into a two-room locomotive exhibition delighting onlookers from all walks of life.

How did this happen?

In the beginning, Jon collected toy trains and Sharyl collected Department 56 ceramics, an upscale line of holiday decorations, collectables and village scenes. The couple then merged these collections, and the result has been dazzling ever since their railroadâs 2005 completion (or semi-completion; something like this is never truly finished).

âThe most fun for us was the building,â assures Jon.

Putting it all together was a collaborative effort. Sharyl arranged, situated and adorned the backdrop and its scenery, developing much of it from scratch and with great care.

âJon did all of the building,â she says. âThen I ended up doing the detail.â

Jon serves as conductor and engineer. He built the scaffolding support system and bench work underneath and laid the track. He mans the remote control equipped with an emergency âkillâ button to quickly shut down everything on the loop to avoid toy train catastrophe. The locomotives have the capability to operate at an impressive rate of speed, but he rarely tops them out.

âI can run it off the rails,â he says. âWeâve had very few crashes, but they sure can happen.â

During peak seasons of operation, 40 or more boxcars run around the three train-track loops. If the cars were populated with real-life passengers, the people would enjoy an abundance of visuals. Several annual onlookers at the Engelhardt residence have attested to seeing something new upon each annual visit.

Scented plumes of smoke waft from the toy-train locomotives, and the conductors can be heard over the intercom speakers communicating their shipments with one another. Other intricate details include an ice station, a depression-era hobo village adorned with fun and minute details including the playing of the tune, âBeautiful Dreamerâ; a live-action barrel loader, an Adel water tower, a sawmill, skiers, a playground and bandshell, a tire swing, a drive-in movie theater, a wedding scene, live-action log-loading equipment and too many other intricate nuances to list.

âYouâre only limited by your imagination,â laughs Jon, âand your wallet.â ♦