Snapping together models based on space robots, Iowa Gundam Builders has gone from zero to 300 members in two years. 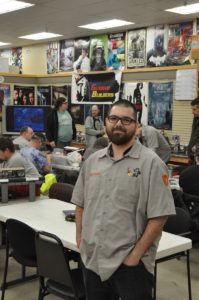 As a kid, Dylan Black didnât care for putting models together. His experience with the hobby had been a tedious one, and it ended with a disappointing and gluey mess. But during one of lifeâs rough patches five years ago, Black needed a stress-relieving outlet, and he was introduced to Gundam models.

Working with tiny parts and aligning microscopic pieces to fulfill precise designs by way of handheld tools, Gundam model building can definitely be a challenge. However, the allure is knowing that, on the other side of said challenge, is a magnificent superhero, villain or some other form of awesomeness.

Gundams are plastic models based on space robots, says Black.

âIt is based on the Japanese anime franchise,â he explains. âThe original kits were released in 1980, so this is the 40th anniversary.â

The hobby appeals to people of all walks of life, but he says the models are especially popular with people fond of Cartoon Networkâs classics.

As his passion for the hobby grew, Black and some friends wanted to share their love.

âBuilding models, while it can be very stressful, is actually very stress relieving,â insists Black.

Two years ago, Iowa Gundam Builders was founded, and, fueled by passion, the group has grown from zero to 300 members in less than two years.

Time and patience are the key ingredients to becoming a good Gundam builder, according to Black.

âI sit down every Sunday for 4-5 hours on a Twitch stream, and I build,â he says. âThen Iâll build a couple hours off stream to just de-stress from the day.â

An average-priced kit cost between $20-$50. Some of the less expensive ones start at $5, but, like many hobbies, a person could spend about as much as they want. At the extreme, models sell for $300 or more.

Some people collect the kits without putting them together, but many have a passion for the construction aspect of the hobby, too.

âIâm pushing well over 100,â smiles Black, admitting that he has a room in his basement that has been overtaken with colorful and awe-inspiring builds.