Norwalk man will compete to win $10,000 and a world championship 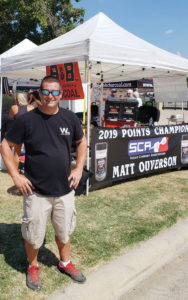 Norwalkâs Matt Ouverson logged 63,000 miles in a single calendar year while traversing the Midwest and competing in grilling competitions.

No one grilled more steaks with more skill, on a more consistent basis, and at a higher level of competition. The rising star will now compete at the Steak Cookoff Association (SCA) world championships in Fort Worth later this year for a chance to win $10,000.

The world-class grill master works for the City of Norwalk when he isnât on the road, but he spends most weekends out of town and making grill marks. He even plans to fly to Australia this March to compete.

Anyone can enter most SCA steak-cooking contests â assuming they have properly joined the association, paid their dues and registered for an event â but only a handful excel to the level of winning something called a Golden Ticket, which is earned by winning an event outright. Golden Ticket holders are given automatic entrance onto the sportâs big stage â the annual world championship.

âMy proudest moment came when I won my first contest, maybe three years ago.â remembers Ouverson. âI was still a nobody, and I was in Omaha with a bunch of great cooks. I knew they were good, but those people didnât know me â yet.

âI turned in my steak, and another guy that was really good tasted it, and he goes, âMan, thatâs a really good steakâ… That made me feel good about myself.

âAfter that I went to the world championship for the first time, and I was like, âThis is cool.â Then I got to know other people, and itâs like a big family now.â

The upcoming World Invitational Steak Championship will be Ouversonâs third time at the event. This year, after winning a points title, he thinks the other serious competitors will be eyeing him as one of the probable favorites. But he doesnât want to jinx himself by making predictions.

With that said, he offers one forecast for Fort Worth.

âWe will have a good time,â he smiles.

Having earned his stripes and learning at the sportâs highest level, Ouverson is looking to share his grilling acumen by offering instruction to others. He conducted a December event in Mississippi, and the results encouraged him to teach another class in Kansas City on April 24. He will also offer a class in Mason City later this summer.

âWeâre also trying to get a contest right here in Des Moines,â he says. âItâs a growing sport. Three years ago, there was probably only 100 contests in the United States, none worldwide. There was nothing overseas. Today, thereâs 420 contests worldwide, and 380 of them are probably in the United States. Itâs growing.â ♦

SCA competitions are judged by a panel that scores the steaks based on a range of factors, including appearance, taste, shape, doneness, tenderness and grill markings. Entrants bring their own grills and aims to achieve a perfect medium temperature.

No one automatically attains the best cuts of meat. Prior to each event, entrants take turns selecting their cuts from a single sliced loin. The process is designed to force competitors to master imperfect pieces of meat. Success or failure is often predicated upon these pre-competition choices.

A first-place prize of $10,000 goes to the SCA World Championship winner, annually crowned in Fort Worth, Texas. The four-day event is the worldâs largest and draws competition from all around the globe. Neighborhood grilling gurus with gumption can get entrance and participation details at www.steakcookoffs.com. Most SCA events feature first-place cash prizes of $1,000.