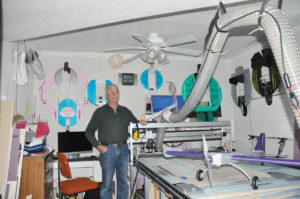 Patience makes 3-D printing a perfect hobby for LaVerne Sanders. The retired software engineer has a passion for figuring things out. He has become known for the circular flying discs he designs and makes in his Urbandale basement.

Tucked in the basement of LaVerne Sandersâ Urbandale home are three unique looking machines. Sanders combines these apparatuses â a laser, a CNC machine and a 3-D printer â along with his computer and a steaming mug of coffee to make one-of-a-kind objects.

âI got that guy about five years ago,â he says, pointing at his Mendel Max 3. The 3-D printer kit had to be assembled manually.

âRight down to each little screw,â he says. Similar kits now come mostly put together, but he worked for two months on his. âIâm retired now, but when I put it together, I had to work evenings and weekends.â

What exactly is a 3-D printer, and why is one helpful?

New products generally begin as a design. These designs need to become a prototype so that potential clients and investors can visualize them. But making these initial models has historically been difficult or expensive. 3-D printers help alleviate some of this burden. Imagine an inkjet printer that works in 3-D. The printer prints, or builds, objects by layering thin layers of a plastic-like material on top of another.

âIn theory, you can make anything you can draw,â Sanders says, assuming you had a printer big enough, but he cautions that it isnât as easy as it sounds. The average person with no training wouldnât be able to do much. He estimates that 95 percent of the work, when it comes to 3-D printing, is done at the electronic drawing board with a CAD (computer-aided design software) program. Long hours at these computer drawing boards are first required, and the drawing takes time and patience to learn.

âI went to school to get an electrical engineering degree but soon got into software,â he says. âI had no experience with any of this when I started.â

Anything might technically be possible to make, but not everything should be 3-D printed. Two-dimensional objects are less practical for a 3-D printer.

Flat pieces, in particular, are done better with computer numerical control (CNC) machines that, like the 3-D printers, are pre-programmed via computer software. They move tools and wood-working machinery, such as routers, drills, boring tools and lathes.

Sanders enjoys a challenge, and he has mastered these skills well enough to become known among his friends for the circular aircraft he makes. His radio-controlled planes arenât technically flying saucers, but, in the sky, they look a lot like UFOs â and they come hot off the presses from Sandersâ basement.

âIâm infatuated with anything that gets up into the air,â he says, motioning to the many planes positioned around his home. But only one was purchased as a kit. Thatâs the one he put together with his son 10 years ago. The rest are his designs.

âEverything else you see in this room, those are all mine,â he says. âWe made them, drew them, cut them out on my CNC machine, put them together and made them work.â ♦